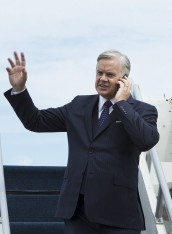 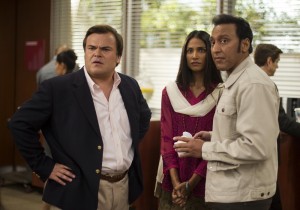 In HBO’s new comedy THE BRINK, Sundays at 10:30, the world finds itself on the title precipice, with World War III a distinct possibility, thanks to warmongers in both the U.S. and Pakistan. Caught in the middle are an inept U.S. embassy aide (Jack Black) who finds himself in the thick of major espionage, a sensible driver (Aasif Mandvi) who is stuck at the aide’s side, a Secretary of State (Tim Robbins) who pays at least as much attention to his sex life as to his job and two bomber pilots (Pablo Schreiber, Eric Ladin) who unfortunately hit the wrong targets. Any similarities to a modern-day version of Stanley Kubrick’s film DR. STRANGELOVE are strictly intentional and acknowledged.

Also an executive producer and show runner on THE BRINK, Roberto Benabib talks about his unconventional look at U.S./Pakistan political relations.

AX: How long ago did you guys get the idea for this?

ROBERTO BENABIB: I guess it would be whenever the Kubrick exhibit was here [in Los Angeles]. We’d always wanted to do something like it. We made the pilot a year ago, so this would have been maybe two years ago. Then it gestated for awhile, and then we just got it and wrote it and figured out what we wanted to do.

AX: You’re a television veteran, but your brother Kim is not. How did the two of you wind up doing this together?

BENABIB: My brother’s a writer and had written a novel. And we had always wanted to work together and we just started writing together. We’re very close and he had ideas and I had ideas and it just kind of came together that way.

AX: Did you have to research anything or learn anything in order to write this?

BENABIB: We did extensive research in every aspect. Life on an aircraft carrier, life in Pakistan, life in the Situation Room, what a Secretary of State’s day is like. Every aspect of the show is heavily researched.

BENABIB: You have an idea where it goes, and then you work out the actual details in the writers’ room as you go along. But generally, a rough road map of where you end up.

AX: Although there are governmental bad guys, the portrayal of ordinary Pakistanis in THE BRINK is pretty complimentary. Growing up, my mother would say of different TV shows, “This is good for the Jews, this is bad for the Jews.” Did you feel like it was important to show something positive about Pakistanis?

BENABIB: Yeah. I think the phrase we would use is, “This is good for humans, this is bad for humans.” That’s who we wanted to portray, is humans, whether they’re Pakistani or whatever, that they’re people caught in the middle. This is world politics. I would say that’s very much one of the reasons why that [Massoud] family was created. To show that that’s exactly the case.

AX: How did you design the house where the Massoud family lives?

BENABIB: We first actually did research photos of middle-class homes in Islamabad and on the outskirts of Islamabad. You send people out and they take photographs and they come back and you talk to people and you kind of get a sense of which place you want to shoot at and how that’s going to work. It’s an upper-middle-class Pakistani family. They’re intellectuals, the father’s a writer, the uncle is a professor and a doctor, and this was the home of a family that’s very much the intelligentsia of Pakistan and how they would live. The only thing I think different from how we live is that you’d have a multi-generational household, unlike here.

AX: Where did you shoot the Islamabad exteriors?

BENABIB: The Islamabad [exteriors] were shot here, in Los Angeles. We were all over L.A. And interestingly enough, Islamabad resembles Los Angeles. One of the reasons that decision was made was because our Pakistani advisors were telling us, “Well, what’s Islamabad like?” “It’s a lot like Los Angeles.” The topography is very similar to Los Angeles. It doesn’t look like Kabul. It doesn’t look like Afghanistan. It’s very lush, it’s very green, it’s at the foothills of mountains, and we found that there was almost a correlation between the two.

AX: You’ve got quite a few big names in your cast. Did you come into this feeling confident, “Well, we can get …” or were you surprised, “Wait a minute, we’re getting all of these movie stars to be in a TV show”?

BENABIB: I was happy to get a great actor, any actor. People as they came about, [fellow executive producer, the late] Jerry [Weintraub] and [executive producer/director] Jay [Roach] started saying, “You realize with this material, we’re going to get amazing actors, actors you never would have dreamed of getting.” And that came true.

AX: How are the producing duties shared out on this?

BENABIB: I have line producers, I have writer/producers, I have people who do budgets. It’s a real “takes a village,” as they say, to make a television show, and everyone is just really good at what they do.

AX: How arced is THE BRINK? Does the season end on a cliffhanger, or do you resolve the Season 1 issues?

BENABIB: All of the above. You do everything. You do it all. You resolve and you put a little taste of something else.

AX: If there’s going to be a Season 2, may we surmise that the world doesn’t blow up at the end of Season 1?

BENABIB: Not necessarily, but probably. It’s called THE BRINK, not THE END.

This interview was conducted during HBO’s portion of the Television Critics Association press tour in Pasadena, California.