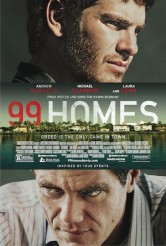 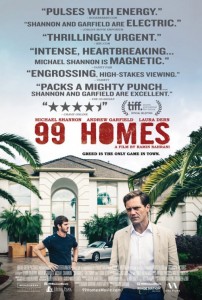 By now, it is widely accepted that one of the reasons for the 2008 U.S. economic recession was predatory lending practices by banks. One of the ugliest results of this was people getting turned out of their homes, often with no warning and sometimes when the house in question was the only one the residents had ever known.

99 HOMES takes this as a premise and turns it into a dramatic narrative. We have a good idea of where this is all going in the broad strokes, but that doesn’t stop the movie from eliciting strong emotions.

We’re in 2010 Florida, where construction worker/electrician and single dad Dennis Nash (Andrew Garfield) is having a tough time providing for himself and his young son Connor (Noah Lomax). Then Dennis and his mother Lynn (Laura Dern) are thrown out of the house where Dennis was born for being late with bank payments. They are given ten minutes to gather up any important belongings, then escorted out the door by sheriff’s deputies under the direction of realtor Rick Carver (Michael Shannon), who handles foreclosures for the banks.

Director Ramin Bahrani and his co-writers Amir Naderi and Bahareh Azimi do a great job of creating the combined confusion, panic, humiliation and fury that go with the action. Carver’s practiced, faux-sympathetic manner makes him a clear villain. We never find out anything about him that surprises us, but he does deepen after this initial impression.

Dennis is another story, a man who is sympathetic to his neighbors and who can barely believe or accept what’s happened. Lynn is more accustomed to the vagaries of fate, but Dennis keeps trying to figure out how to get the house back. It turns out that most of the few paying construction jobs in the area come from Carver’s real estate company, and Dennis’ willingness to get his hands dirty (literally) appeals to the boss. Soon Carver gives Dennis a real job, with real money, and real moral dilemmas.

Here’s where we have to suspend some disbelief. Would a person as canny as Carver really take on someone as essentially decent as Dennis seems to be? The filmmakers want to make the point that Carver believes money is the ultimate motivator for everyone, but as a longtime manipulator, he has to know that different people have different keys. Lucifer may be all about corrupting the innocent, but since Carver is a mere mortal who is acutely aware of what he has to lose, his pressuring Dennis into collusion when there are other options seems less like confidence and more like a mixture of compulsive bullying and brinksmanship. Then again, perhaps this is what we’re meant to infer.

Garfield is a very sympathetic presence, which makes us root for Dennis to do the right thing; we never hate him, even when his actions are appalling. Shannon conveys the surety of a man who believes the kill-or-be-kill doctrine justifies everything. The script investigates this to a degree, making Carver a frightening man because there’s no reasoning with him – he feels his own survival is at stake with each action he takes. Dern looks too young to be Garfield’s mom (there’s only a sixteen-year age difference between the two performers), but brings a wealth of concern and warmth to her character. Lomax is natural as a kid who understandably just wants some stability.

99 HOMES isn’t a thriller in the conventional sense. Although there’s an undercurrent of violence throughout, people aren’t stalking each other or trying to out-maneuver one another. Instead, we wonder how far Dennis’ descent will and can go, and the journey is intense. Those unfamiliar with the home-loan industry (most of the audience) may also learn a few things about what the banks get out of foreclosures, some of the shenanigans that unscrupulous realtors can engage in, and perhaps how to guard against the disasters depicted in the film. As a movie with some lessons for us, 99 HOMES may not be the most transcendent, but it is practical, useful and fairly disturbing.