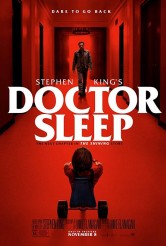 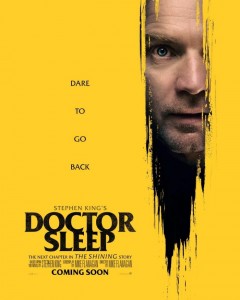 Talking about the new film DOCTOR SLEEP has aspects that are like one of those “if a train leaves the station in Boulder Colorado at five miles an hour” math puzzles.

DOCTOR SLEEP is the title of Stephen King’s 2013 sequel book to his 1977 novel THE SHINING. THE SHINING has been adapted for the screen twice, once in 1980 by Stanley Kubrick as a feature film, and again in 1997 as a TV miniseries by Mick Garris. Over the years (and in fact, in the introduction to the DOCTOR SLEEP novel), King has gone on record about how much he dislikes the Kubrick film. It’s understandable. Kubrick made a lot of changes to the source material; however one felt about the result, it’s fair to say it didn’t really resemble King’s book.

King is, however, on record as being very happy with the DOCTOR SLEEP film, directed and scripted by Mike Flanagan, even though the movie is not only a faithful adaptation of King’s novel, but also, somehow, a fairly faithful follow-up to Kubrick’s THE SHINING. This sleight of hand by Flanagan is so impressive that any students of how to make books into films and/or how to do sequels ought to see DOCTOR SLEEP just to take notes.

It’s hard to know exactly how the first two-thirds of DOCTOR SLEEP will play for viewers who aren’t familiar with any versions of THE SHINING or, for that matter, the DOCTOR SLEEP novel. Filmmaker Flanagan does a game job of juggling three major plotlines, which for awhile seem independent of one another.

First, there’s the title character, aka Dan Torrance (Ewan McGregor). We first meet Danny as a little boy (Roger Dale Floyd), who is still plagued by nightmares – and tangible, dangerous ghosts – from the horrendous experience he and his parents had at the very haunted Overlook Hotel. Danny has a psychic gift, which he’s taught to call “the shining” by his less psychic, grownup friend Dick Hallorann (Carl Lumbly). This unfortunately attracts unfriendly spirits to him, but turns out to be useful later in life. As an adult, Dan uses alcohol to try to dull the shining and bad memories, hits bottom, and finally finds Alcoholics Anonymous, a job, friends and some purpose in a small town. 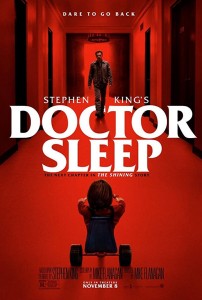 The next plotline has to do with the True Knot, led by Rose the Hat (Rebecca Ferguson). This tightly woven band of long-lived, no longer quite human beings travel the country together, preying upon children who shine. The True Knot torture and kill their victims in order to eat their psychic abilities.

Finally, there’s Abra Stone (Kyleigh Curran), a little girl who’s got quite a lot of shine, so much that she can perform telekinesis, project her mind and more. When Abra reaches the age of thirteen, she sees the Knot murder a little boy (Jacob Tremblay), a puts out a psychic call for help. Dan would rather not answer, but he’s in range, and feels he’s got a lot to make amends for.

Flanagan does a very good job of giving us details visually, and also has more sympathy than we might expect for the murderous Knot, using new recruit Andi (Emily Alyn Lind) to help us comprehend their allure. He also recreates images (sometimes with accuracy that is as eerie as the subject matter) that we may know from Kubrick’s SHINING as points of reference.

Once we get to the third act, everything coalesces into a climax that feels right on multiple levels, visually, thematically and emotionally. It honors King’s writing while putting things together in a way that works better for the camera.

McGregor impresses as a mild-mannered fellow struggling against a painful past, and Ferguson makes Rose at once larger than life and continually interesting. Curran isn’t afraid to show a strong dark side as the sympathetic Abra. Lumbly offers comfort and authority, and Lind shows us a young woman who really enjoys her power. Other major players include Zahn McClarnon as Rose’s chief lieutenant, Cliff Curtis as Dan’s best friend, and Zackary Momoh as Abra’s astonished father. Henry Thomas is rather amazing when he appears.

DOCTOR SLEEP has to get through an enormous amount of story, mythology and emotion in a two-and-a-half-hour running time. Sometimes we feel the tension between these things more than may be comfortable, but it ultimately combines the horrifying and the satisfying better than might be expected.