A second vigilante emerges in Starling City, but his style of crime fighting involves brutally murdering the city’s lowlifes on a live video feed, and Oliver Queen must stop him before his next public execution. 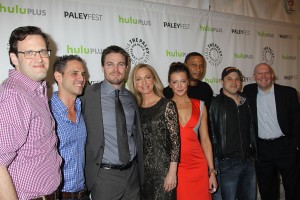 ARROW gets dark this week.  In the past ARROW had softened the edges around its rough premise, (a vigilante targets people whose names appear on a list and forces them to confess their assumed crimes to the authorities or face pointy, pointy death).  Usually this darkness was kept at bay by sprinkling in some comic book goofiness, or some romance.  But there’s no attempt at any of that in “Salvation,” ARROW’s bleakest episode yet.   And we’re talking BREAKING BAD, WALKING DEAD, and GAME OF THRONES levels of bleak.  And, while “Salvation” handles the dark tone effectively, the entirety of the viewing experience is actually kind of numbing, and not that much fun.

The bleakness begins immediately, as the episode opens with Oliver Queen (Stephen Amell) preparing his cohorts, John Diggle (David Ramsey) and Felicity Smoak (Emily Bett Rickards) for his impending outing as the hooded vigilante, where he plans to pay a visit to a degenerate slumlord and “cross him off” his father’s list of criminal associates.  The implication of this is fairly clear, but Oliver knows that Felicity, who’s new at the vigilante game, is uncomfortable with the prospect of his killing a bad guy, and tries to get reassurance that she’s okay with this plan.  She says she is, but it’s not quite convincing.

But Oliver arrives only to find that someone else has abducted the aforementioned slumlord, and that someone else is a wackjob calling himself “The Savior” (Christopher Redman).  The Savior doesn’t try to conceal his identity at all, however; he’s a former transit worker who rages over the murder of his wife, and seeks collective punishment against all the bad people who oppress the residents of “The Glades,” Starling City’s poorest and most crime-filled neighborhood.   The Savior is also a tech wizard who wants an audience, and he streams a live video feed of his execution of the slumlord to all computers with a Glades IP address.  The execution scene is brutally direct and uncomfortable, (he shoots him point blank with a handgun after making him plea for his life) and the savior doesn’t wear a costume or invoke any kind of comic book imagery.  This is a gritty, ugly murder by the aesthetic standards of ARROW.  And it’s a welcome sign that ARROW has a character, (Felicity again), wonder aloud what this murder says about vigilantism generally, and whether the methods Oliver uses are ethically different if the end result is a dead body either way.

ARROW’s subplots are all dark and/or sad this week as well.  Previously ARROW had teased us with the (very comic book-y) notion that perhaps Sarah Lance, late sister of Laurel Lance (Katie Cassidy) had actually survived the shipwreck from the beginning of the series.  Laurel’s mother Dinah, (Alex Kingston) had unexpectedly returned to Starling City to enlist Laurel and her ex-husband, Detective Quentin Lance (Paul Blackthorne) in a quest to identify the woman in a photo snapped by a tourist on an island in the South China Sea.  Dinah believes the mystery woman is her daughter Sarah, and while Quentin appeared skeptical at first, the temptation that this new hope presents is too great for him.  In “Salvation,” Laurel is surprised to discover that her parents have set up a mobile command center in her apartment, frantically following up every lead they can.  And their desperation is contagious, as Laurel finds herself contacting a friend from the Chinese Embassy to see what she do to help the search.  While I thought this story might play out over several episodes and lead to the emergence of Sarah as a new character, ARROW saw fit to dash the hopes of the Lance family immediately, when it’s confirmed that someone else was the woman in the photo, and that Sarah is truly dead.

Additionally, while it was assumed that Sarah’s presence on the Queen’s yacht that night was a secret, (because Oliver had been cheating on Laurel with Sarah), Dinah reveals that she knew about the affair, and the yacht trip, and actually encouraged Sarah to go, and “follow her heart.”  Laurel learns that her mother aided and abetted her sister’s plan to take her boyfriend, and has to watch her mother melt into guilt-ridden shrieks of “I killed her,” when she realizes there’s actually no hope of seeing her daughter again.

On a somewhat lighter note, Thea Queen (Willa Holland) discovers that her new “bad boy” love interest Roy Harper (Colton Haynes) is such a mass of self-hatred that he’d rather go ahead with his plan to rob a liquor store than work at the legitimate nightclub job she got for him.  After a fight where Thea calls Roy a “waste,” he is kidnapped by The Savior and slated for a public execution of his own:  A fate Roy not only seems to accept, but actually believe he deserves.

But none of these are even the darkest story of the episode.  “Salvation” also gives us Oliver’s mother Moira Queen (Susanna Thompson) sinking into full Jesse Pinkman mode and completing a slide into a moral void we might have previously assumed she was destined to escape.  Frank Chen (Chin Han) her friend and co-conspirator, who had reluctantly signed on to her failed assassination attempt on the evil Malcolm Merlyn (John Barrowman), is the poor bastard who winds up in the Gayle Boetticher role here.  After Malcolm demands she produce the name of the person who hired a Triad hit man to kill him, Moira decides that, for the sake of her family’s safety, it’s far better if Malcolm never finds out it was her.  Moira gives up Frank’s name, betrays him right to his face, and then has to watch in horror as Malcolm, (wearing his own hooded archer outfit), puts several arrows in his chest.  When last we see Moira she’s in hysterics in her car while trying to wipe Frank’s blood from her hands.  While she’s ostensibly been a criminal all along, she’s also avoided hurting innocents at all costs, but now she’s done something to make herself irredeemable, and while it’s intriguing, I found it disappointing that her otherwise strong and competent character was reduced to this level of desperation.

Obviously the episode ends with Oliver rescuing Roy from death at the hands of The Savior, and there is even a Lan Yiu Island flashback sequence again this week that is fairly action-packed, but the lingering take away from “Salvation” for me is the image of Moira’s bloody hands, and the realization that ARROW is willing to go a lot darker than I’d imagined it would, and I’m not sure I like it.  While ARROW’s premise embraces some obvious moral ambiguity, it hasn’t previously been trying to punch its audience in the gut each week the way many cable dramas do.  It still feels like a “fun” action show and it doesn’t seem built to accommodate “Salvation” levels of darkness on a sustained basis. My hope is that it won’t have to.