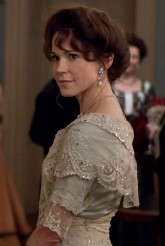 The actress talks about her new series, plus an upcoming Stephen King film 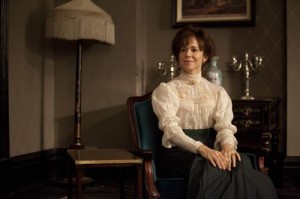 MR. SELFRIDGE, which begins its ten-week first-season run on PBS Sunday March 31 at 9 PM, begins in 1908, depicting the fact-based story of Harry Selfridge, an American who came to England and founded the now-famous chain of Selfridge’s department stores

Jeremy Piven plays Harry and Frances O’Connor plays his wife Rose. O’Connor has done plenty of period fare before – she starred in film versions of MANSFIELD PARK, MADAME BOVARY, THE IMPORTANCE OF BEING EARNEST and the WWII drama WINDTALKERS, as well as futuristic movies including Steven Spielberg’s A.I. Born in England and raised in Australia, O’Connor talks about taking on the role of Rose Selfridge.

ASSIGNMENT X: Was your first movie the film about Australian college students?

AX: It seems like everyone involved with that film has gone on to have great careers – Radha Mitchell has a new show, RED WIDOW, this season. Do you all keep in touch with each other?

O’CONNOR: We do, yeah. Emma-Kate Grogan is in New York now, and I keep sporadically in touch with her and Matt Day’s a really good friend of mine. Yeah, we all keep in touch. It was a small film, we did it for nothing.

AX: You’ve been in the feature film world for a very long time. Were you looking to work in England and/or in television?

O’CONNOR: You know, I wasn’t really – my agent had handed [the MR. SELFRIDGE script] to me when I was auditioning for films and looking for my next thing, and I just so loved the idea of the project, the quality of the writing was so high that I really just wanted to be a part of it.

AX: Do you think Rose Selfridge views the situation as, “Oh, this is an adventure,” or “Harry, why the hell are you dragging us across the Atlantic?

O’CONNOR: I think she starts with the first one and then kind of moves quickly to the second one, because he’s so obsessive about the store and then he’s had dalliances before, but he’s never really fallen for anyone and I think she she’s this is actually totally different territory, and she gets quite lost and alone, I think.

AX: Does she form any alliances with other gentlemen?

O’CONNOR: She may do. I don’t want to give too much away.

O’CONNOR: Well, Australian’s always easiest for me, because that’s my culture and that’s what I grew up in, and I have to put about the same amount of effort into playing an American or a British person, I think, because I have to really work on the accent and there’s a different kind of character, I think. The American characters are usually quite different from the British in terms of energy. I think American characters are usually kind of a bit more liquid and – you can’t really make generalizations, actually, because Rose Selfridge actually was probably more a conservative kind of background. She was more conservative, I think, and she was more genteel, I think as a person.

AX: How does playing someone who’s in 1908 affect the performance?

O’CONNOR: It’s 1908, so we had very strong corsets. You can’t really breathe [laughs]. But for any kind of time period, it requires a different kind of thing as soon as you get the costume on. No matter where you are, it’s very important to remember that you’re just a human being and when they were in 1908, they were in the modern era as far as they were concerned, so I think it’s always about finding the human dilemma and making it real, and making it something that the audience has something to relate to, no matter what era that it’s set in, and still be a human being.

AX: Does it matter to you if you’re playing a person who actually existed or if it’s a fictional character?

O’CONNOR: I think if it’s a real person, it can be great, because you’ve got so much material, whereas fictional, you can just use your imagination, but I think you have a slight responsibility if you’re playing a real person, especially if they’re still alive. I’ve never done that actually, but that’s something I would like to do.

O’CONNOR: There’s very little written about her, because she really took a back seat to Harry. She was incredibly proactive before she got married, she ran her father’s company, she managed and created development in real estate, she was a real go-getter. And it all just dropped away after she marries Harry, which is interesting. Because I’m pretty sure that behind the scenes she gave great advice and was probably very hands-on in the company in terms of advice. And I actually really love Rose Selfridge as a character. You can’t really tell from the pilot, but as she develops, she’s got some great scenes and she goes on an amazing journey. She might not be saying it, but she knows what’s going down [laughs]. I think the thing about Rose is that she knows that Harry is a philanderer and a lot of her conflicts in the first series is how she deals with it. But she loves him.

AX: How is it playing opposite Jeremy Piven?

O’CONNOR: It’s great. He’s kind of a ball of energy and that’s always really fun. It’s very energetic and kind of out there, so it’s very fun. He’s very spontaneous. I like that.

AX: Is there an equivalent Australian department store chain to Selfridge’s?

AX: Before you got involved with MR. SELFRIDGE, had it ever occurred to you to think, “I wonder what the story behind these department stores is?

O’CONNOR: Well, I have shopped at Selfridge’s, because I lived in London for eight years, and I’ve always really loved – I’ve spent thousands of pounds in that shop [laughs], so it’s ironic to be doing a show about it, but yeah, it’s fun.

AX: Can you talk about the location filming?

O’CONNOR: Well, we filmed in a lot of real situations. There’s a scene with myself and this young artist and we shot it in the National Gallery. It’s set in the National Gallery. So I assumed it would be a set and then, “Location – National Gallery.” It was crazy. They had like a hundred extras around these amazing paintings. And our house, the Selfridge exterior, is right next to Albert Hall, and it was fantastic to shoot around real locations in and aroundLondon. They really keep centralLondon very period-looking, except from the main drags.

O’CONNOR: I’ve got a film [that screened at Sundance], EMMANUELLE AND THE TRUTH ABOUT FISHES, which is with Jessica Biel and Alfred Molina. And I [am working in Los Angeles] on this Stephen King film. It’s called MERCY. It’s based on a Stephen King short story called “Grandma.” It’s with Shirley Knight and Dylan McDermott and Chandler Riggs.