Home » War for the Planet of the Apes movie review 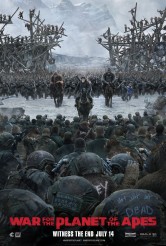 Movie Review: WAR FOR THE PLANET OF THE APES 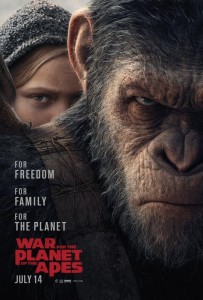 WAR FOR THE PLANET OF THE APES begins with Caesar trying to avoid the title conflict. He is now the undisputed leader of an ape colony that includes chimpanzees, gorillas and orangutans. Caesar is the only ape who can speak aloud, but everyone else in the community is fluent in sign language. (WAR FOR THE PLANET OF THE APES is probably one of the highest-profile entertainment projects to feature this much use of ASL). Any friendly humans have long since left the area. A ferociously anti-ape human colonel (Woody Harrelson) keeps sending scouts into the apes’ territory. Before Caesar can move his people to safer turf, the colonel personally participates in an attack. The aftermath sends Caesar and his closest friends on what starts out as a quest for vengeance and becomes something else.

There are many wonderful aspects of WAR FOR THE PLANET OF THE APES. It creates extremely high stakes, as we wind up worrying about almost every character we see, and has massive sequences of conflict and destruction. At the same time, it is full of grace notes. A gentle, wordless sequence between the massive orangutan Maurice (Karin Konoval) and the mute child Nova (Amiah Miller) is as affecting as anything shown this year in a conventional drama (or comedy) between two human actors. Speaking of actors, the performances are remarkable. The blend of motion capture and CGI in rendering the apes – chimpanzees, gorillas, orangutans – is now seamless. The uncanny valley issues that were present in the first film when dealing with small chimpanzees have all been resolved. This means that even the youngest apes (all played by motion capture performers) are able to do whatever is needed and look wholly realistic.

People have rooted for Serkis to get an Oscar nomination for his motion capture work as Gollum in the LORD OF THE RINGS films. Here, Serkis gets to use his own eyes to express Caesar’s feelings, and it’s tough to think of a performance that shows more soul. It’s also great to see Serkis convincingly portray the kind of tough, wise, physically powerful hero that would be played in live action by the likes of Christian Bale or Matthew McConaughey. Konoval is likewise exceptional, and Harrelson has a perceptive take on his obsessed colonel. Steve Zahn is delightful as a character who is unexpected but most welcome.

WAR FOR THE PLANET OF THE APES has its slow patches. In not wanting to gloss over exactly what our protagonists are up against, Reeves lingers on a few things a bit longer than necessary. However, he knows how to sell spectacle. More, he knows how to make us really care about the people he shows us. What could have just been a title-grab sequel is instead a genuinely moving experience.