The star also talks about THE PURGE films 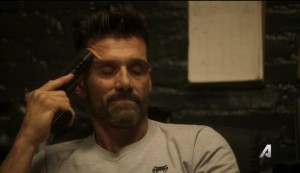 In AT&T Audience Network’s KINGDOM, now in its third and final season Wednesday nights on DirecTV, there are no crowns or thrones – and not many rules, either. In Byron Balasco’s scripted series about the world of mixed martial arts, aka MMA, the fights are all out.

Frank Grillo stars as Alvey Kulina, a semi-retired MMA fighter who has opened his own gym in Los Angeles and works as a trainer, but is pulled back into the game by his sons (played by Nick Jonas and Jonathan Tucker) and his own ambitions.

Grillo, a native New Yorker, has had roles in a number of memorable TV and film projects, including THE SHIELD, PRISON BREAK, ZERO DARK THIRTY, CAPTAIN AMERICA: THE WINTER SOLDIER and CAPTAIN AMERICA: CIVIL WAR. The actor has also starred in THE PURGE: ANARCHY and THE PURGE: ELECTION YEAR. The PURGE films deal with an America in which all law is suspended for twelve hours one night a year, an event that, in practice, brings out the worst in the upper classes and is full of peril for those of limited means.

ASSIGNMENT X: Do you have discussions with Byron Balasco about how injured Alvey can get before he wouldn’t be able to function, or he’d be permanently disabled?

FRANK GRILLO: I do, because you’re always then tied to that. For instance, in this season, [Alvey is] coming off of antidepressants, Lexapro, which has severe withdrawals. So that, along with fighting, because I’m fighting this season, you have to maintain these behaviors. So yeah, when he’s writing, I talk to him often about how that will affect dramatic scenes and my behavior.

AX: Is it fun to have some kind of a physical injury to play, or is it sometimes difficult?

AX: Do you keep up on what’s going on in the real world of MMA and see how it stacks up against what you’re doing in KINGDOM?

GRILLO: I’m very involved in [real-world] MMA. In fact, I was at a confidential meeting with six key ex-UFC fighters, world champions, who were unionizing the fighters. So I’m involved at many levels.

AX: Do you have a union rep background?

GRILLO: I don’t. I’m there more for support and to see if there’s anything that myself and my partners [in the company War Party] can do to facilitate the fighters in their journey. And then in boxing, there are some fighters that we manage. So I’m steeped in the world of fighting.

AX: Since you manage boxers in real life, which is not unlike what Alvey does in KINGDOM, do you ever go to Byron Belasco and say, “You know, I think that maybe Alvey would …”?

GRILLO: This is a collaboration. He trusts me more than he trusts himself about the fighting aspects of it, because that’s my world. So this is a gift for me. When this is over, I’m going to be very sad.

AX: Are you looking forward to getting back into the ring this season?

GRILLO: I am. And I’ve been training diligently. I’m training four hours a day right now, with all professional fighters, so when I do get back in the ring, I’ll be ready.

AX: So you were working in L.A. on KINGDOM and commuting home before this?

GRILLO: Well, the show only shoots for three months and then in between that, I usually do two or three movies, which are around the world, but I just wasn’t seeing my family that much, so we decided to move the entire family to L.A., and the kids are in school and very happy, and so we’re here, we’re in L.A.

AX: Does it help you as an actor that where you are purporting to shoot is where you’re actually shooting, as opposed to shooting, say, Vancouver for Los Angeles?

GRILLO: Yeah. DirecTV and Chris Long [AT&T Audience Network’s senior vice-president in charge of original content and production], he gave kudos to us, but I give kudos to DirecTV and Chris Long. They’ve allowed us to do this show, which I don’t think any other network would. They kept us in L.A., which is not a cheap thing to do. There are much cheaper places we could shoot this show. So DirecTV has been an amazing partner in that sense.

AX: With THE PURGE, those films went from being exploitation thrillers to near-documentaries by the most recent one last year …

AX: Are you thinking, “At some point, are we going to be completely prophetic?” Are you afraid of that?

GRILLO: We made THE PURGE: ELECTION YEAR before all of the Donald Trump and Hillary Clinton thing started. So it was kind of a happy accident. In fact, the movie wasn’t even called ELECTION YEAR. And we, as this started to progress, Universal smartly changed the [title], so that the zeitgeist would [resonate], and I think it was pretty successful. My relatives in Italy are talking about fascism coming back. I mean, they’re re-erecting statues of Mussolini. That’s not a joke. It’s unfortunate, but whatever we talk about in THE PURGE, it’s like, “Hey, we better be careful.”

AX: And what would you most like people to know about KINGDOM Season 3?

GRILLO: It’s more intense, it’s more back to what we were doing in Season 1, which is more about the family, more about what’s going on with us internally, and then we have these amazing fights. It’s more of what makes this show great.