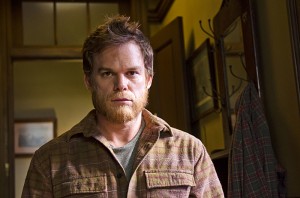 What’s perhaps most surprising about DEXTER’s series finale, “Remember the Monsters?,” which wraps up eight years of the show, is the huge question left unanswered – after dealing for all this time with why Dexter (Michael C. Hall) kills, how that urge affects his human relationships, how his human relationships affect his homicidal tendencies, we don’t know at the end whether Dex is going to carry on his murderous ways. The haunted, hostile expression on his face in the final close-up suggests an affirmative answer, but by then we – and the character – have gone through such a major game of Fifty-Two Pickup with emotions, motives, plot elements and actions that it’s hard to figure out exactly what we’re supposed to make of all this.

Dex, Hannah (Yvonne Strahovski) and Dex’s little son Harrison (Jadon Wells) are trying to leave for Argentina, but bounty hunter Elway (Sean Patrick Flaherty) is in the airport terminal. Dex manages to sic airport security on Elway, but this also empties out the terminal. Flights are being grounded in any event, as a Hurricane Laura is coming.

Meanwhile, Deb (Jennifer Carpenter) is in the hospital emergency room with a bullet in her gut. Despite Deb’s ordering everybody not to call Dex, Deputy Chief Matthews (Geoff Pierson) gets on the phone, and Dex heads immediately for the hospital. Deb is conscious if woozy when Dexter sees her. The doctor is optimistic, since none of Deb’s major organs were hit. Dex and Deb have a loving, emotional talk. Deb tells Dex to leave the country with Hannah and Harrison. Dex remembers when Harrison was born, and how Deb told him he’d be a good dad because he was such a good big brother. “Remember the monsters?” Deb had reminded Dex of how he’d explained that the “monsters” in her bedroom were just shadows.

It turns out that Deb’s shot hit her assailant, Daniel Vogel (Darri Ingolffson), who forces a veterinary technician to remove the bullet and stitch the wound. On the television, there’s a report about Deb’s shooting and the search for Daniel.

Dex is clearly having increasing doubts about whether it’s safe for him to be around anyone. He puts Hannah and Harrison on the bus so that they can take a plane out of another airport. Elway has tracked Hannah is on the bus, but she’s able to inject him with horse tranquilizer, knocking him out, while she and Harrison simply switch buses.

Daniel is at the hospital with the unfortunate veterinary assistant. Daniel has cut the man’s tongue out, so that everyone in the hospital rushes to help him, which Daniel thinks means the coast is clear. When he heads for Deb’s room, though, it’s empty and Batista (David Zayas) jams a gun in Daniel’s neck, arresting him before Dex can do anything.

However, Dex doesn’t find Deb in her room. A sad Quinn (Desmond Harrington) – Deb whispered to him that she loves him as she was being taken into surgery the first time – tells Dex there have been complications. The doctor informs both men that Deb has had a massive stroke, probably as the result of a blood clot. She may be able to breathe without a ventilator at some point, but it would take a miracle for Deb to be able to speak, or even actually think, again. Quinn tearfully says he’s holding out hope, but Dex doesn’t believe in miracles.

Daniel is being held in solitary in the local jail. Dex, in his professional capacity, gets it to see Daniel, claiming he’s there to test for gunshot residue. Alone with Daniel, Dex says he’s going to kill Daniel with an ordinary ballpoint pen. Daniel stabs Dex in the shoulder with the pen. Dex then gets the pen away from Daniel and stabs him in the throat with it. The surveillance camera picks up all the action, though not the sound. Dex explains to Batista and Quinn that his job officially didn’t end until the week was up and he wanted to make sure that Daniel was processed correctly – then Daniel attacked him and Dex fought back. Batista and Quinn may not exactly buy this, but they’re willing to sell it to protect Dex.

Dex talks with Hannah and Harrison on the phone, telling Harrison to remember every day that Daddy loves him until they’re together again. Dex then goes to the hospital and apologizes to the comatose Deb. A good big brother wouldn’t leave his little sister in this condition, so Dex disconnects Deb from the ventilator. The hospital is in a frenzy with the coming hurricane, so it’s easy for Dex to wheel Deb’s corpse out. His boat is docked nearby. Out at sea, Dex looks at Deb’s face one last time, then puts her and her white hospital sheet into the ocean. He steers into the oncoming storm.

When the wreckage of Dex’s boat is found, Hannah – now with Harrison in Argentina– reads news of it on the Internet. She doesn’t tell Harrison just yet

Dexter has somehow survived the storm and is now wearing a beard and working at a logging yard. Alone, he stares grimly into space.

On the one hand, it seems fitting that, at the end of the series, Dex remains in charge of his own destiny, and also that losing Deb is really more than he can bear. The whole business with Daniel feels a little diffuse, though – it feels like a bit of a cheat that Dex didn’t have to dig his way out of anything incriminating him this year, but was simply trying to protect Hannah.

Losing Deb at any time before the finale would have been infuriating and indeed, any continuation of the story (if there is one – the climax holds out that possibility) without Carpenter’s impassioned, profane character won’t be DEXTER as we’ve known it. She, too, leaves more or less on her own terms, dying in the line of duty and having said everything she wanted to say, while also believing that Dex is going to be okay. One of the elements of the finale that does work is that Dex finally, albeit too late, understands the scope of the impact he has had on Deb.

Hannah getting Harrison is, well, weird. The show has worked hard this season to convince us that Hannah is actually a perfectly nice person when she’s not threatened, but given her back story, this is b.s. Yes,Harrison says that he loves Hannah to Dex, and Hannah has said she wants to be a mom, but she is a serial killer who lacks Harry’s code. On top of this, Harrison’s half-siblings and maternal grandparents are going to be out of their minds with worry and grief that either Harrison died on the boat with Dexter or has simply vanished. This just seems like lack of thought on Dex’s part, though to be fair to the character and the writers, it’s well-established that Dex tends to get foggy about consequences to his loved ones once he’s fixated on a plan of action.

Usually in a story when the protagonist concludes that loved ones will be better off without him (or her), we want somebody to slap this person out of their funk. Dexter is the rare character who may be right about this. It’s not so much the darkness within him as his need to find the darkness in others, who in turn tend to see not just Dexter but those around him. It happened with Rita, it happened with Deb and it almost happened with Harrison(the Season 6 kidnapping incident). The thing is, we don’t know in that final shot if Dex is depriving himself of everything, including the release of feeling he gets when he kills, or if he’s now a purer murderer now that he has no human connection in his life. There’s a difference between tying things up with a bow and some indication of authorial intent – it’s nice that the makers of DEXTER want us to think for ourselves, but this is a little too much ambiguity for a final bow.

Even so, there is a lot of good here. The scenes between Dex and Deb, Hannah’s momentary triumph over Elway – and how surprisingly gratifying this is for us – Dex performing his final on-air kill relatively in public with something as mundane and unritualistic as a pen all have resonance. This isn’t a perfect episode of DEXTER or a perfect finale, but it’s enough to remind us that we’ll miss these people now that they’re gone from us.