Home » dexter review are we there yet 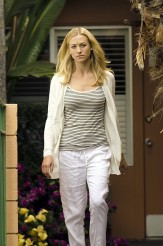 A number of real surprises in a strong episode 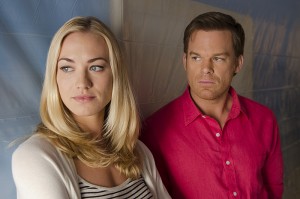 Yvonne Strahovski and Michael C. Hall in DEXTER - Season 8 - "Are We There Yet" | ©2013 Showtime/Randy Tepper

As a series, DEXTER is very good with misdirection, getting the audience to focus so intently on one set of looming perils that we forget all about another menace poised to smack the characters (and us) in the head. So it is with “Are We There Yet?”, which gets us so wound up about what will happen when Deb (Jennifer Carpenter) finds Hannah (Yvonne Strahovski) and what Dex (Michael C. Hall) will do about young serial killer Zach Hamilton (Sam Underwood), whom Dr. Vogel (Charlotte Rampling) wants Dex to mentor but whom Dex would rather eliminate.

Dex bases his desire to kill Zach on the basis of evidence pointing to Zach as the murderer of Dex’s neighbor Cassie, but it turns out that Zach was off killing another murderer at the time of Cassie’s death. It seems someone may have framed Zach. However, between helping Zach dispose of his victim (a schoolmate who strangled a sex partner) and his rekindled feelings for Hannah, Dex’s priorities and attention are all over the place.

Thanks to the tracking device she attached to Dexter’s jeep, Deb finds Hannah in a hotel room. The two women quickly realize they’re at a standoff. Hannah relates that she didn’t kill Deb when there was opportunity because Dex clearly cares so much for his sister. Dex returns, is surprised to find Deb there and very relieved to see that the two women haven’t killed each other – yet. Deb finally throws up her hands at the whole situation; she won’t be tracking Hannah any longer.

There is a warm, almost familial dinner scene at Dr. Vogel’s house, with Dex, Hannah and Zach, presided over by a curious and very pleased Dr. Vogel. We gather that Dr. Vogel has secrets of her own – how she became so interested in serial killers, for one thing – but it is the most relaxed and honest all four of these characters have ever been in a social setting.

Dex has obtained a new identity and passport for Hannah. Despite the obligatory “no, we shouldn’ts,” the two fall into bed together. Dex goes home … and finds Zach’s corpse, missing the back of the skull. Vogel receives a piece of Zach’s brain. Yes, the Brain Surgeon is still out there – unsuccessful in trying to set up Zach for Cassie’s murder, he’s moved on to more direct action.

Dex disposes of Zach’s body – it wouldn’t do to have the murder related to him in any way – then goes to Hannah and asks her not to leave.

There’s also a lot of other stuff going on, what with Deb’s boss (Sean Patrick Flanery) becoming determined to catch Hannah for the bounty and Quinn (Desmond Harrington) determined to catch Zach for the Norma Rivera murder (which Zach actually committed) and for Cassie’s death (that would really be the Brain Surgeon, copycatting Zach).

We get so caught up in whether Dex will kill Zach and what will happen when Deb and Hannah confront each other that we lose focus on who and what else is out there, enabling writer Wendy West and director Holly Dale to give us a solid punch with a reminder that the Brain Surgeon is still out there. The impact is doubled because we, and Dex, were starting to like Zach and holding out the frail hope that maybe Dex could impart the Code to someone else after all.

Underwood deserves special kudos for playing Zach in a way that let us read him as hopeful and trusting or smarmy and smug with equal ease, depending on what was set up around him.

The dinner scene at Vogel’s is a nice touch, giving Dex and even Hannah a measure of normalcy they likely will never know again. As for the scene between Deb and Hannah, it is the polar opposite of what way too many TV confrontations between women are – it is quiet, scary, potent and laden with power on both sides, and it plays out with perfect character logic.

Once again, DEXTER delivers and leaves us eager to know what happens next.

Article Source: Assignment XArticle: TV Review – DEXTER – Season 8 – “Are We There Yet?”