A lot of questionable actions from a number of characters 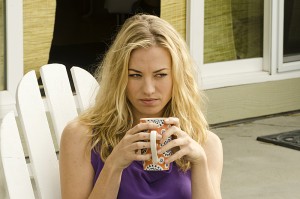 In another season of DEXTER, the events of “Goodbye Miami” might not seem so ominous, but two episodes from the series finale, we have to hope that the climax will be built on something other than Dexter (Michael C. Hall), Hannah (Yvonne Strahovski) and Dr. Vogel (Charlotte Rampling) all making mistakes at the same time.

Dex and Hannah have decided to escape to Argentina together, with Dex’s young son Harrison (Jadon Wells) in tow. Deb (Jennifer Carpenter) is shaken by the prospect of losing Dex, but ultimately lets it prompt her to tell Batista (David Zayas) she wants to return to Miami Metro Homicide. When Quinn (Desmond Harrington) breaks up with Jaime (Aimee Garcia), he and Deb finally acknowledge they still have feelings for one another. All of the above plays smoothly.

However, Dex is convinced that he’s got to kill Dr. Vogel’s (Charlotte Rampling) homicidal son Daniel, aka Oliver Saxon (Darri Ingolfsson). This is in character. Even though Vogel really doesn’t want Dex to kill her biological child, Dex keeps lobbying for Vogel’s assistance. On reflection, this too is in character – after all, we see that Dex continually wants Deb’s and Harry’s approval, so why not Vogel’s?

Meanwhile, Vogel keeps trying to convince Daniel to let her “help” him by getting him back into a mental institution. One doesn’t need to be a lauded psychiatrist with supposedly extraordinary insight into the psychopathic mind to know that this is a prospect that won’t sound appealing to even someone far less self-centered than a homicidal maniac. Rampling and the script do their best to sell us on the idea that Vogel is so blinded by maternal feeling that it blots out her common sense, but it still comes off as stupidity. We may hate Daniel – even more when he starts complaining that he killed his little brother because Mom gave her younger child to much attention – but we can’t blame him for looking askance at this deal.

Dex finally gets through to Vogel by showing her a computer video (he’s managed to hack Daniel’s computer) of Daniel murdering Vogel’s erstwhile patient Zach. Vogel agrees to let Dexter deal with Daniel, but instead of following Dex’s advice to meet in a public place, Vogel invites Daniel to her home. Daniel figures out what’s up and cuts Vogel’s throat in front of Dex when he arrives. Dex cradles Vogel’s body, sobbing.

Well, okay … it’s nice to see Dex can experience loss like a normal person, but it’s a little strange to see him lose it this entirely over Vogel, who he’s known relatively briefly. It may be that he’s hit harder by the loss of what she represents than the actual loss, or that having Hannah around has really softened him, but in any case, it feels like a bid to make us feel more about the pseudo parent/child relationship between Dex and Vogel than we did while her character was alive. The beat is hit too hard for the ambiguity that’s preceded it. Furthermore, Vogel’s wishy-washy behavior, at odds with her psychiatric expertise, has made us more exasperated than mournful. Deb cradling LaGuerta – totally earned. Dex cradling Vogel – not so much.

Then there’s Hannah. Left alone with Harrison, she sees him playing with Deb’s treadmill, but doesn’t stop him in time, with the result that the machine throws the little boy off and he cracks his chin. To her credit, Hannah does try to phone Dex, but he’s busy with other matters. Then Hannah – who knows that her face is plastered all over the news – instead of phoning her friend Arlene (who we know Dex has told the authorities is his girlfriend to throw them off Hannah’s scent) takes Harrison to the emergency room, where of course she is recognized. U.S. Deputy Marshal Clayton (Kenny Johnson) is hot on the trail.

Hannah’s actions are the most understandable – just when things are going well with Dex, she can’t exactly leave Harrison injured, and indeed, she seems to care about and perhaps even love the little boy. Still, it’s an amazingly selfless act for the normally selfish and self-protective Hannah. We’d be more inclined to root for her transformation without the other plot twists.

The U.S. Marshal angle is enough to make one dream wistfully of a never-to-be-made DEXTER/JUSTIFIED crossover. Clayton is depicted as mild-mannered but determined, more of a plot element than a character for us to root for or against at this juncture. We’re certainly rooting for Dex to take out Daniel, as Daniel is not only a serial killer but a “Look what you made me do” sadist who blames everyone else for his own actions, easily putting us on Dexter’s side in this equation.

“Goodbye Miami” leaves us anxious to see how this will wrap up, and more certain than ever that will miss Dex and company, but the perfect storm of self-endangering action here makes this specific episode not one of the show’s best installments.