The series’ penultimate episode is uneven, but has some satisfactions 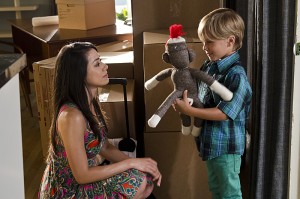 With only one episode left, it’s hard to assess DEXTER’s penultimate hour, “Monkey in a Box.” Are the changes in characters evolution, or just ways to get our people to screw up in order to pile on more perils? Can Dexter (Michael C. Hall) change? Should Dexter change? Without knowing where it’s all going, it seems pointless to judge.

Taken on its own terms, “Monkey in a Box” has a lot of good moments. Dex is preparing to leave Miami with Hannah (Yvonne Strahovski) and son Harrison (Jadon Wells), but there are complications. For starters, there’s the murder of Dr. Vogel, which shakes Dex especially when he tells Deb (Jennifer Carpenter). Deb rejoins Miami Homicide as a detective, but is then subjected to a visit by the U.S. Deputy Marshal Cooper (Kenny Johnson) and later her ex-boss Elway (Sean Patrick Flanery). Deb realizes that they’ve figured out Hannah is stashed at her place, so she and Dex have to move Dex’s lover to a hotel and hope that she’s not discovered anew.

Then there’s the matter of Vogel’s killer – her serial murderer son Daniel (Darri Ingolfsson), aka Oliver Saxon. He’s brought in for a DNA swab by Quinn (Desmond Harrington) for Cassie’s murder. Dex knows the DNA will show Daniel is related to Vogel, which will then lead to a discovery of Daniel past, which will make him a prime suspect in Vogel’s murder. For once, Dex and Deb have a truce – if Dex catches Daniel first, he’ll kill him; if Deb gets him, she’ll arrest him. Deb winds up helping Dex nab Daniel and lets Dex have him. Dex takes Daniel to the abandoned hospital that Daniel has been using as his own kill room. However, Dex discovers that he’s more interested in getting together with Hannah than he is in killing Daniel. Dex leaves Daniel tied up and calls Deb, telling her she can arrest their mutual target.

Alas, Deb is being tailed by Cooper, who comes into the room to find Daniel bound to a chair. Daniel convinces Cooper (who doesn’t know who Daniel is) to untie him, then promptly stabs the marshal to death. When Deb arrives, she calls for backup before entering the hospital room. Daniel now has the marshal’s gun. Daniel and Deb both get off shots. Deb is hit in the stomach and calls for an ambulance. Daniel gets away – we don’t know if he’s hit or not.

Dex, ignorant of these events, feels that he’s finally rid of his “dark passenger,” the impulse to kill. The shade of Harry (James Remar) says Dex doesn’t need him any more. Dex heads out with Harrison, thinking in voiceover about how great everything is going to be …

Much of “Monkey in a Box” is given over to formal goodbyes, with a lot of back and forth between Dex and Deb. Deb’s relationship with Quinn is improving, and Dex feels this will help Deb make it without him. Both Dex and Deb are able to see each other clearly and appreciate each other. Dex admires Deb for having a moral compass and Deb tells Dex he’s a human being after all. Given where the characters are at present, it rings emotionally and psychologically true.

It’s a little hard to buy that true love has swept away Dex’s homicidal impulses – it would be easier to accept that this change is the result of everything that’s happened, not just Hannah, which we could do if the script, via Dex, weren’t so insistent on this conclusion.

Also stretching things a bit is all of the Dex/Deb flip-flopping on what to do with Daniel. First Deb wants to arrest Daniel, then, without any evident moral or legal qualms, she helps Dex catch him so that Dex can kill him – and then Dex changes his mind. Maybe this is meant to play as a sort of homicidal riff on THE GIFT OF THE MAGI, but it plays as uncharacteristic wishy-washiness from two ordinarily firm-minded people. As for Hannah being holed up in the hotel, this seems a little passive for this erstwhile paragon of self-protection, but maybe there will be a payoff.

It’s nice to see a call-back to Season 3 with the inclusion of Valerie Cruz as Sylvia Prado, the wife of Season 3 antagonist Miguel Prado (Jimmy Smits), who comes in to help Dex sell his condo.

The jury is still out on the overall effect, but it’s always good to spend time with Dex, Deb and the Miami Metro crew. We’ll miss them when they’re gone.