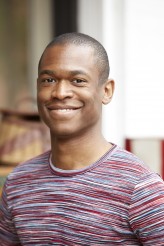 Exclusive Interview: Harrison Knight on THE WATSONS GO TO BIRMINGHAM 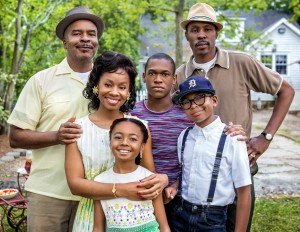 Hallmark Channel’s new telefilm THE WATSONS GO TO BIRMINGHAM, which premieres Friday, September 20 at 8 PM, is based on the Newbury Medal Award-winning novel by Christopher Paul Curtis. The time is 1963. The Watsons, an African-American family consisting of dad Daniel (Wood Harris), mom Wilona (Anika Noni Rose), young daughter Joetta (Skai Jackson), young son Kenny (Bryce Clyde Jenkins) and rebellious teenager Byron, played by Harrison Knight, travel from their home in Flint, Michigan for a visit to relatives in the segregated Alabama city of Birmingham. While they are there, the 16th Street Baptist Church is bombed in a racist hate crime (a real-life event chronicled in Spike Lee’s documentary FOUR LITTLE GIRLS). The incident has a profound impact upon the Watson family.

At twenty-two, Knight as Byron is playing slightly younger than his actual age. The actor, born in Orangeville, South Carolina, has had guest roles on a number of series including CSI: MIAMI, GREY’S ANATOMY and SOUTHLAND and costarred in the METEOR miniseries.

At an event organized by the Hallmark Channel for the Television Critics Association press tour, Knight talks about stepping back in time to play Byron Watson.

ASSIGNMENT X: Was the Sixties a period of time that interested you before you became involved in THE WATSONS GO TO BIRMINGHAM?

HARRISON KNIGHT: 1963 was a time when the civil rights movement really started to take place, so of course it was an interesting time for me.

AX: Would you have wanted to be a part of that time, or are you glad to have missed it? I mean, I’m glad I missed the Fifties altogether.

KNIGHT: I’m grateful to have grown up in the time period that I did, so I didn’t have to go through that. 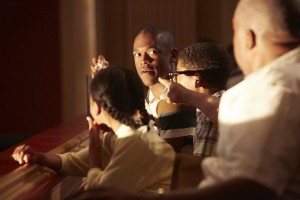 AX: And did you learn anything historical while making this?

KNIGHT: I learned more about the Sixteenth Street Church bombing in Birmingham, Alabama. I actually also realized that the Congressional Gold Medal was given recently to the families of the four little girls that died in the bombing.

AX: Do you have brothers and sisters in real life?

AX: So is it fun for you to play somebody with siblings, involved in a family dynamic?

KNIGHT: Oh, yeah. I love having Bryce and Skai around. It’s been amazing.

AX: Byron is kind of an angry young man. Do we know what he’s angry about, or is it just a manifestation of the teenage blues?

KNIGHT: Some of it is the teenage blues, but I think he thinks that he’s a little smarter than he is, so he just tries to make up for what he doesn’t have.

AX: What’s the most challenging or rewarding part of playing Byron?

KNIGHT: The most rewarding part is just to experience what the older generations went through.

AX: Kenny Leon directed THE WATSONS GO TO BIRMINGHAM. How was he to work with?

KNIGHT: Kenny’s great. He’s a great guy to work with, a really nice person and a great director. Kenny’s very direct. He’ll tell you to live in the moment, just be yourself and do what’s natural – live as the character, but still be yourself. 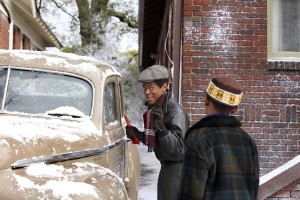 AX: Where did you film this?

KNIGHT: I’m working on music – working on an album. Not composing – singing and rapping.

AX: When is that due out?

KNIGHT: Well, it’s still in production, so until that’s finished, I can’t give a date.

AX: What would you most like people to know about THE WATSONS GO TO BIRMINGHAM?