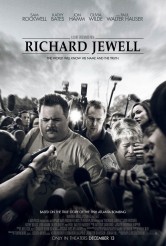 The personal story is much better than the big picture here 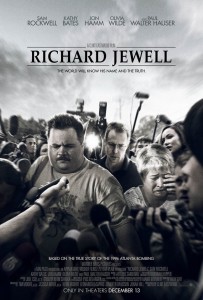 On July 27, 1996, Richard Jewell, a security guard working a concert at Atlanta, Georgia’s Centennial Park during the Olympic Games, noticed an unattended backpack. Colleagues thought Jewell was overreacting, but the bomb squad was called. The backpack indeed contained several pipe bombs. Jewell participated in evacuating civilians from the area, saving hundreds, perhaps thousands, of lives. The bomb squad was unable to prevent the devices from detonating. Two people were killed and over one hundred were injured.

Jewell was hailed as a hero for insisting the suspicious package be checked and for getting as many people as far away as possible before the blast occurred. Then the FBI began looking into Jewell, and their focus got leaked to the press.

All of the above is factually correct, and shown within RICHARD JEWELL.

We first meet Richard (Paul Walter Hauser) ten years before the bombing, when he’s working as an office supply room clerk at a federal building. Richard is a little socially awkward and detail-oriented to the point of being overzealous, traits not lost on lawyer Watson Bryant (Sam Rockwell), who also works there. Richard desperately wants to be in law enforcement. He gets a job as a college security guard, only to get fired for roughing up students in their dorm rooms for drinking and pulling cars over on the highway (where neither he nor the college have jurisdiction).

For a brief, glorious three days, when Richard is right about the backpack being dangerous, he is celebrated. Once he is suspected by the FBI and that suspicion is publicly reported, he becomes a pariah. He and his mother Bobi (Kathy Bates) are trapped in their home, with news crews parked outside and friendly-acting FBI Special Agent Tom Shaw (Jon Hamm) trying to trick Richard into incriminating himself. Richard gets Watson to represent him legally.

RICHARD JEWELL starts to bifurcate into two movies. There’s the one that seems to be what director Clint Eastwood and screenwriter Billy Ray, working from the article “American Nightmare: The Ballad of Richard Jewell” by Marie Brenner, and the book SUSPECT by Kent Alexander and Kevin Salwen, want us to see. That’s the one about a decent, innocent, downtrodden soul learning to stand up for himself under duress. That’s also the one the excellent Hauser (who has been working as an actor for the past fifteen years, even though this may be the first time many will have noticed him), the exemplary Bates and the endearing Rockwell are making.

Then there’s the yeah-but-what-exactly-are-you-trying-to-say movie running alongside the first one. In reality, and as depicted in RICHARD JEWELL, an Atlanta Journal-Constitution reporter named Kathy Scruggs (played here by Olivia Wilde) broke the story of the FBI’s focus on Jewell as a person of interest. As of December 10, 2019, in reality (but not in the film), the Journal-Constitution and Warner Brothers are arguing about the depiction of Scruggs in RICHARD JEWELL, which has her exchanging sexual favors in exchange for information from Agent Shaw. There seems to be no evidence that this actually happened, and it adds a level of sensationalistic sleaze to a story that is complaining about unfair media depictions. It also feels absolutely unnecessary, except in the service of creating an unlevel playing field, where the antagonists are being unprofessional, instead of just mistaken.

FBI profiling comes in for some pummeling, even though Richard’s earlier behavior understandably draws interest. RICHARD JEWELL doesn’t even let Richard have a moment of triumph when his much-mocked thoroughness leads to the bomb’s discovery. He is lauded, but Richard himself never gets a moment of going, “Hey, I was right,” even to himself. The movie is so intent on maintaining Richard’s humility that it almost undercuts his humanity.

It’s not clear how we’re meant to take things like Richard pulling people over on the highway, or shoving admittedly snotty teens around. What we get is a man who really does want to be of service, but who is shown to be so unaware of nuance as to be possibly a little mentally slow. In other words, he isn’t somebody who seems like he should be in a position of authority in any case.

RICHARD JEWELL is a loving portrait of Richard, his mother and his lawyer. It succeeds at this. But it’s also a story of an investigation heading in the wrong direction, possibly fueled by the news. Instead of examining how things went awry there, RICHARD JEWELL provides trumped-up villainy, which isn’t intellectually persuasive or dramatically compelling.