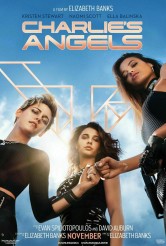 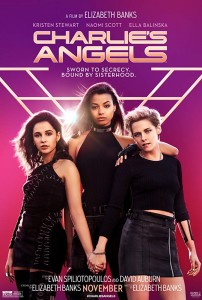 CHARLIE’S ANGELS by now has a history way out of proportion to its overall quality. First, it was a TV series that ran for five seasons, from 1976 through 1981, launching the careers of Farrah Fawcett, Jaclyn Smith, Cheryl Ladd and Tanya Roberts in the process. (Kate Jackson’s career had already started to take off before then.) Then it was brought back as a pair of movies, 2000’s CHARLIE’S ANGELS and CHARLIE’S ANGELS: FULL THROTTLE, starring Cameron Diaz, Drew Barrymore and Lucy Liu. Then it was briefly revived as a new TV series.

Now CHARLIE’S ANGELS is on the big screen again, directed by Elizabeth Banks from her screenplay, from a story by Evan Spiliotopoulos and David Auburn. Angels in this context, for those who have somehow missed the decades of cultural references, are gorgeous female private investigators who work for the enigmatic but benevolent Charlie. This CHARLIE’S ANGELS takes care to explain that the Angels are now a global organization, with chapters in many countries all over the world. An early montage demonstrates that the new film is part of an overall canon (there are also script references to incidents that happened in the earlier films).

Our primary Angels this time around are former parolee Sabina Wilson (Kristen Stewart), who is quirky, and former MI-6 agent Jane Kano (Ella Balinska), who is tough. Their handler is Bosley (filmmaker Banks), one of many in the organization who holds that title (she explains that “Bosley” is like “lieutenant”). The Angels are called to the aid of young computer scientist Elena Houghlin (Naomi Scott), who has discovered that a power source she helped develop can be used as a tool of assassination. When Elena tries to blow the whistle, action ensues.

It’s hard to know exactly what to make of the new CHARLIE’S ANGELS. On the one hand, it improves the franchise’s game. Unlike its predecessors, this CHARLIE’S ANGELS no longer tries to derive humor or novelty from the idea of young women being action heroes. The movie still lets their adversaries underestimate them, but it mostly just lets them go at it with energy and conviction, which is refreshing.

On the other hand, it’s all seems meant to be escapist in an old-fashioned way, trying not to take itself too seriously. This might work if the jokes were better and more frequent, but as it is, everything is pleasant and flashy without ever really grabbing us. It also ignores what contemporary escapism has come to mean, i.e., a feeling of escaping into some other reality that we can invest in for the duration of what we’re watching. There’s an inherent glass ceiling with CHARLIE’S ANGELS. Giving it too much heft would change it into something that conflicts with the brand, but that means it’s always going to feel more like fluff than film.

Although the plot does have an element of mystery – who’s the real bad guy? – it all seems more like a rationale to get everybody from one scenic setting to the next than a genuine attempt to tell a story. While the filmmakers couldn’t have known during production what would be going on in the real world at the time of release, the choice of Istanbul, Turkey, for some major events is a little jarring at present. Also jarring is the dissonance between mood and incidents. For all of the fighting and car crashes, the tone is so breezy that there were gasps in the audience when some supporting characters die.

Stewart gets a chance to be goofy and upbeat here, and charmingly revels in it. Balinska is impressively physical. Scott, required to be wide-eyed much of the time, has a great bit where she starts enjoying her character’s newly-discovered capacity for violence. Banks knows exactly how to work her Bosley. On the male side, Patrick Stewart is, as always, reliable as another Bosley, and the excellent Jonathan Tucker, even with next to no dialogue, is formidable as a hitman with the determination of a Terminator.

CHARLIE’S ANGELS isn’t as high-flying as it seems to want to be. Then again, it does what it’s supposed to do, and in addition isn’t ever actively irritating. If that’s a higher bar to clear here than it ought to be, that’s because of what’s come before. For all the glitz and nonsense, there is what feels like a sincere desire to celebrate female friendship and ability, which creates some welcome warmth. Banks deserves credit for making this movie as watchable as it is.