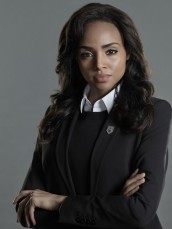 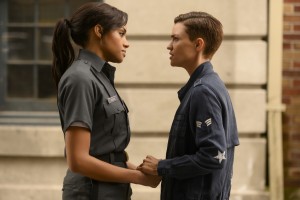 BATWOMAN is the latest series in The CW’s DC Comics/Greg Berlanti-verse, airing on Sunday nights. The show has already received a full-season pickup for this, its first year. Ruby Rose stars as Kate Kane, who discovers that her missing cousin Bruce Wayne has secretly been Batman. Since Gotham City is without a protector, Kate adopts the mantle of Batwoman.

Kate has a complicated past and present. Her father, Col. Jacob Kane (Dougray Scott), runs the Crows, the paramilitary outfit serving as law in Gotham these days. Kate has her own military background, but Jacob would prefer his daughter stay out of his doings. This may be because Kate was discharged from the U.S. service when she was outed as a lesbian. Her lover, Sophie Moore, played by Meagan Tandy, denied the affair and was thus allowed to remain. Nowadays, Sophie is Jacob’s right hand with the Crows. She’s also married, but there’s still a spark between Sophie and Kate.

California native Tandy recurred as Braeden in four seasons of the supernatural drama TEEN WOLF. Her other major roles include arcs on the new CHARMED, SURVIVOR’S REMORSE, UNREAL, and JANE BY DESIGN, and in the features UNSTOPPABLE and PIRANHA 3DD.

ASSIGNMENT X: In a lot of TV series and movies, the woman is the damsel in distress. However, in BATWOMAN, Sophie is a soldier – most of the women characters are heroes – bu she’s also sometimes a damsel in distress who is menaced by a woman, Alice, who’s played by Rachel Skarsten, and then rescued by Batwoman. Does that soldier who sometimes need rescuing feel like a dichotomy? 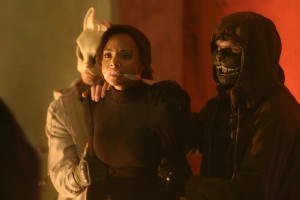 MEAGAN TANDY: No, absolutely not. I think that’s what makes her so interesting. Because the cool thing is, I think in my previous roles, I’m always the damsel in distress. You do the love stories, and you’re always the love interest, and that’s it. But with this show, it’s not just that at all. Sophie’s got that tough side. She’s helping the Crows. She works with Jacob Kane. She’s also got a complicated relationship with Kate Kane. And so I honestly just think it adds to Sophie, and it adds to the story of Kate, as well as Sophie.

AX: Do you think Sophie is genuinely bisexual, or did she marry her husband because she wanted to conform to a certain image? Or do we know that yet?

TANDY: I’ve got to be careful what I can say here. I will say that the really interesting thing with Sophie is that she’s figuring that out. Sophie doesn’t even know that yet. Sophie’s trying to figure out, is she genuinely into her husband, or is she genuinely into Kate? So I think that’s a part of the discovery with Sophie. She’s trying to work those things out. Now, what does Meagan think that Sophie is? I don’t think she knows yet. Sophie doesn’t know. We’re going to find out, though.

AX: How is it working on a show with a largely female cast, and that’s female-led?

TANDY: I absolutely love the fact that there are a lot of females on this show, and I love that the lead of our show is female. It definitely has been different, because my previous shows, especially TEEN WOLF, was definitely a male-dominated cast for the most part. So yeah, it’s been different. But I do enjoy the fact that we have more females here, and it’s all about women empowerment, and it’s awesome. 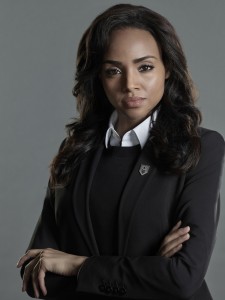 AX: TEEN WOLF was also a show with sort of a group of people teaming up to do secret things, and the town where it was set, Beacon Hills, was sort of its own world, with its own rules. BATWOMAN is set in Gotham City, where Kate is teaming up with people to do secret things. Do you feel there’s any kind of a thematic through-line between the two?

AX: Were you a fan of Batman/Batwoman, any of the comics?

TANDY: Yes. I have to admit, I am a super-BATMAN fan. I love Batman, I think he’s very sexy. Mind you, he’s been played by so many amazing men. Michael Keaton’s amazing, Christian Bale’s portrayal of the Dark Knight is amazing, so being part of the female version of it, honestly, it’s awesome, because she is the female Batman, so yes. Because I was such a big BATMAN fan, and I’m also a big ALICE IN WONDERLAND fan. So Alice [who patterns herself after the Wonderland Alice], and the whole thing that she gets into, it’s been my literal favorite character dynamic coming together. It’s been awesome.

AX: Do you have an affection for the fantasy/horror genre as a performer, or is this just how you’re getting cast?

TANDY: Oh, I genuinely have an affection for this genre. Because, like I said, I’m a major Batwoman-er, and a major Batman-er. So it wasn’t just like, “Oh, all right, here’s the role,” no. It was like, “Wait, wait, wait, what? Batwoman, Gotham City, and I get to portray this amazing character.” Honestly, it was such a no-brainer. And I love that. Because not every character that you get to play do you actually love, and you enjoy being a part of, and this one, I did. So it’s awesome.

AX: Sophie has a lot of action, both as the aggressor and as the victim. With doing stunt work, they say, if the character’s feet leave the ground, it’s probably the stunt double …

TANDY: [laughs] Not always. I love it, actually.

AX: Did you have to learn how to do anything in order to play Sophie, whether it’s how to salute or how to handle a weapon, or …?

TANDY: Yes. I just learned the other day how to properly hold an AK-47, AK-16 – oh, God, there are so many AKs, I can’t keep up, but I just learned how to properly hold a gun, and I’m also learning how to properly be able to punch, because I was not punching properly [laughs]. I do kick-boxing, and I do Tae Bo, but let’s be honest, that’s not the way you’re supposed to do it. So I’ve got a wonderful stunt double, her name is Rochelle Okoye, and she has taught me and is training me how to properly punch. She’s very badass. I love her. She also lets me jump in and do things that I feel I can do, but she does it way more amazing.

AX: Gotham City in BATWOMAN has a very distinctive look. How much of your exteriors are practical sets, and how much is CGI?

TANDY: We have a lot of exteriors that are genuinely there. For example, we get to go and film in Chicago, because we want to be able to have that true Wayne Tower in Gotham City feel. But our set decoratorss do a wonderful job of making sure that it looks like we’re in Gotham, and then we’ve got an amazing special effects team that comes in and does all that CGI when we need it. But I would say it’s been pretty balanced.

TANDY: I don’t have any other film projects going on. The only other one that I have going on, that I would love to say is, I have my Meagan Tandy Foundation, which helps girls. It’s not on television or anything, but it’s a project that’s so dear to my heart, to be able to make sure that schoolgirls have backpacks and school supplies. It’s called Girl Talk, and it’s from the Meagan Tandy Foundation. It’s not TV, but it’s very dear to my heart. If people are interested, you can please go to GirlTalkNow.org, and it’s so much fun. It really is a blessing to be able to give back.

AX: And what would you most like people to know about Batwoman?

TANDY: I would want people to know that Batwoman, aside from her of course being this amazing badass character, and she’s a defender, she’s a protector, she also has a soft side. She genuinely wants to get that relationship with her father. She wants to get that relationship back with Sophie. She’s got a warmness to her. So it’s not just guns and shooting and whatever. She’s got a warm side, and I think people will enjoy that.