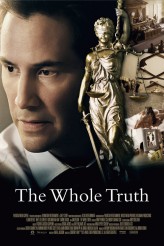 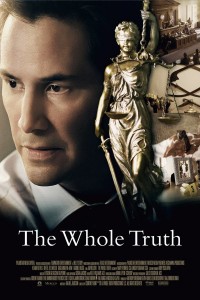 THE WHOLE TRUTH has a set-up that seems like it ought to make a perfectly good movie, or even a miniseries – lawyer defending a minor being tried as an adult for an act of patricide. However, the slow pacing, digressions that go nowhere and multiplying implausible details act against the movie’s best interests.

Keanu Reeves plays Richard Ramsey, a Southern lawyer who narrates the film in what seems like an effort to provide some kind of novelistic flair. Ramsey is defending Mike Lassiter (Gabriel Basso), a minor charged with first-degree murder in the death of his father, Boone Lassiter (Jim Belushi). Mike won’t talk to Ramsey – or speak at all, for that matter.

Director Courtney Hunt and writer Rafael Jackson try for atmosphere and suspense, but the more we find out about what’s actually going on, the more unlikely it all seems. For a courtroom drama where we’re meant to worry about the defense, we get a prosecutor who barely registers. There’s a subplot with Ramsey’s second chair Janelle (Gugu Mbatha-Raw), who gets a back story that requires a lot of exposition and doesn’t move the story forward. The characters have history, but no psychological depth. It’s hard to know what we’re meant to care about.

The filmmakers seem to be going for a RASHOMON effect, where multiple points of view provide multiple explanations, and where we come into a scene dictates how we see it. This could work, except that it’s very hard to avoid guessing one major twist right away. The revelations we finally get make less sense the more we think about them.

Additionally, THE WHOLE TRUTH looks a little low-rent. Independent filmmaking on a budget is always to be applauded – to get something from concept to distribution is a Herculean effort – and this is well-made as far as it goes. Still, after awhile, it feels like we’re stuck in the courtroom for long periods of time less because this is where the action is and more because this is the primary set. There aren’t too many attempts to open things up and give us a sense of community or atmosphere. At the same time, we don’t feel particularly claustrophobic, either – there’s no emphasis on anybody being trapped.

Reeves portrays Ramsey as keeping things close to the vest, with the result that the character isn’t particularly colorful. While a livelier lead wouldn’t have helped with credibility, it might have made things a little more fun. Renee Zellweger provides troubled distress well enough. Basso does a reasonably good job with a very difficult role, and Mbatha-Raw conveys the frustration and doubt her character experiences. Belushi’s Boone is perhaps the most compelling character on view; he’s a jerk, but he’s a lively jerk.

We can tell the kind of movie THE WHOLE TRUTH wants to be – Southern noir, full of cynicism and sorrow. Here, ambition outstrips achievement.