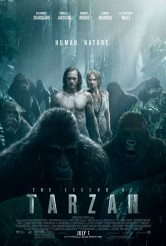 Movie Review: THE LEGEND OF TARZAN 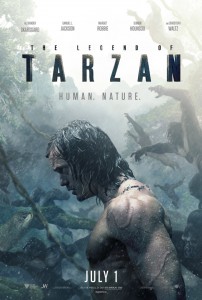 THE LEGEND OF TARZAN is a title that is at once helpful (this will be a movie about Tarzan) and misleading. Between all of Edgar Rice Burroughs’ stories about the Lord of the Jungle and the various films, cartoons and TV series about the character, using a “The” seems a bit overly authoritative. “A” legend would work; given the film’s structure “Some Legends” of Tarzan might be more accurate.

In any event, THE LEGEND OF TARZAN, focusing on John Clayton (Alexander Skarsgard), Earl of Greystoke, who is also Tarzan, raised in the Congo by gorillas, is something of a mixture. On the one hand, Skarsgard, who has gotten into astonishing shape for the role and plays the character as though his soul is on the line (though his accent sometimes retracts), is a pretty perfect Tarzan. On the other hand, this adventure is a rather fractured affair that wants to have its wild side but also a regular thriller plot as well, and the two don’t always mix well.

Historically, King Leopold II of Belgium did in fact for a time have private ownership of the Congo. His officials and mercenaries treated the Congolese horrifically. Although emancipation had been proclaimed in the United States, Leopold’s men were enslaving the inhabitants of the Congo in conditions that resulted in millions of deaths.

It is against this background that THE LEGEND OF TARZAN takes place. King Leopold’s (fictional) right-hand man, Leon Rom (Christophe Waltz), takes a squad of soldiers deep into the wild, seeking diamonds to shore up the king’s increasingly sparse funds. Rom encounters deadly and enraged Chief Mbonga (Djimon Hounsou), who agrees to give him a fortune in diamonds, if Rom will bring Tarzan to him.

King Leopold has made it extremely difficult for outsiders to visit the Congo (and thereby see the condition of the locals). Tarzan has been living at the Greystoke estate for the last eight years with loving wife Jane (Margot Robbie). Jane is also a native of Africa – her father was a village schoolteacher. John’s fame as Tarzan has spread, and he assumes that’s the reason King Leopold has invited him to tour the Congo. At first, John declines. Then he’s approached by U.S. Civil War veteran George Washington Williams (Samuel L. Jackson), who needs John to accept the invitation so that George can go along – and document the slave trade so that it can be stopped. John, Jane and George all travel together back to the village where Jane grew up and the forest where John was born – all ignorant of Rom’s plans.

As all of these aspects of the plot deal pretty much with human beings, LEGEND gets into Tarzan’s background via a series of flashbacks. They gradually add up, mostly, but it also feels like a way to get to moments the filmmakers think the audience is expecting without having to spend time putting them into a larger context. It speed-bumps both the 1890s plotline, most of which has John and George trying to rescue Jane and whole villages from Rom, and the back story of how Tarzan came to be raised by apes, how he met Jane and a few points that loop back to the larger narrative arc.

With all of this jumping around, it’s hard for the desired emotional threads to take hold. We don’t get enough time with Tarzan and his simian mother and brother to have strong feelings about the family relationship, and although Skarsgard and Robbie are extremely attractive, singly and together, the Tarzan/Jane romance doesn’t get much inflection either. The biggest source of fun is perhaps the buddy pairing of Tarzan and George. George may be out of his depth in the jungle, but when the occasion calls for it, he’s the kind of total righteous badass with a gun that Jackson has by now made into a visceral pleasure that transcends surroundings.

LEGEND finds its groove late in the running, when Tarzan uses his pull with the wild creatures to orchestrate something pretty spectacular. It’s a thrill, and it’s easy to understand that the filmmakers didn’t want to play this hand to early or too often, but it’s also the kind of thematic excitement that could have worked to great effect earlier in the movie.