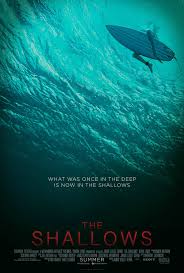 THE SHALLOWS pits Blake Lively’s surfer, Nancy Adams, against a Great White shark that has taken up residence near a secluded beach in Mexico.

No one should go to a summer shark attack movie expecting plausibility – once in a great while, something like the all-too-believable OPEN WATER comes along, but that’s the exception. It’s usually not a problem, except when the movie wants to be taken seriously on a number of levels. THE SHALLOWS aims to persuade us that it is taking place in the real world, and even tries grounding its heroine in some soul-searching crisis and past trauma, but the script by Anthony Jaswinski faces some enormous challenges.

Director Jaume Collet-Serra gets good mileage out of the tension caused by the huge, dark silhouette in the water, and Lively turns in a strong action performance. If one likes aquatic scares and/or pleasant scenery of the human, oceanic and coastal varieties, THE SHALLOWS delivers on those fronts. However, most of the suspense in THE SHALLOWS comes from watching the movie in meta terms.

First of all, there’s the issue of how a surfer can be threatened by a shark for most of a film without either dying or getting away very early into the running time. To its credit, THE SHALLOWS solves that problem well enough.

Then there’s the matter of why no one comes to Nancy’s rescue. We don’t wonder at this either – the beach is so secluded that we’re surprised whenever we see anyone else there at all.

And then there’s the question of why the shark does what it does. Again, no one in the audience is expecting a documentary. According to a March 2013 article at seeker.com, Great White sharks eat far more than previously believed, as much as one seal pup every three days. We can stretch disbelief to suppose a super-sized Great White could eat multiple people within a few minutes. However, since the story posits that the reason the Great White is hanging around in the first place is because of an enormous whale carcass floating in the bay, we can’t help but wonder why the big fish is so fixated on Nancy when it’s got a much easier meal just bobbing there.

Ideally, we’d be riveted enough by the movie not to be bothered by such things, but THE SHALLOWS is so intent on creating movie-of-the-week-style drama that it’s hard not to get distracted. Nancy learns big lessons in the midst of her suffering. Sometimes, her medical training (she dropped out of college after her mother’s death) comes in handy for some impressively intense emergency self-treatment. Also, there are occasions when Nancy’s habit of talking to herself clarifies what’s going on. Often, though, her dialogue states what we can already see perfectly well, and occasionally it’s just preposterous.

As for Nancy’s final confrontation with the shark, let’s just say she pulls off a maneuver unknown to other shark films to this point, including the SHARKNADO series, presumably because the makers wouldn’t dare.

Collet-Saura finds some extraordinary beauty in the ocean and coastline (Queensland, Australia, stands in for Mexico here). He also finds beauty in actress Lively, which is fair enough, though some of the camera angles lingering on various portions of her anatomy seem a wee bit retro and exploitive.

THE SHALLOWS isn’t JAWS, and it isn’t exactly a perfect example of the character redemption tale it appears to want to be. However, neither is it dull. As shark vs. human movies go, this one is periodically absurd, but generally entertaining.