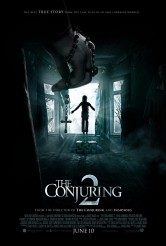 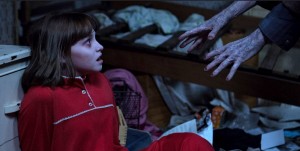 THE CONJURING 2 is a properly scary movie that makes no apologies. If it seems like invoking Freddie Krueger at a couple of points seems like it will work, then that’s what it does. If it simultaneously brings forth real-life photos and recordings to back up its basis in actual history and gives us events that weren’t documented and seem unlikely, the film is comfortable with that, too.

THE CONJURING 2 is a follow-up that, like the original 2013 THE CONJURING, follows paranormal investigators Ed (Patrick Wilson) and Lorraine Warren (Vera Farmiga). The Warrens are/were real people who believed in what they were doing. There is plenty of material backing up and debunking their work.

The CONJURING films are supernatural horror, so there’s no questioning the Warrens’ rightness or righteousness here. One of the great skills of director James Wan (who also helmed the first installment) and leads Wilson and Farmiga is that they sell the danger of the proceedings, even as the couple seem so noble and brave that it’s a lot easier to believe in menace from beyond the grave than their style of perfection.

In the first CONJURING, the Warrens and a local priest worked with a large family being tormented by the spirit of an angry witch. This time around, the Warrens go to Enfield, England to see whether or not eleven-year-old Janet Hodgson (Madison Wolfe) is possessed or simply playing games.

Since we see what’s happening in the Hodgson household long before Ed and Lorraine arrive, we the audience know that Janet is being tormented by something unearthly. As THE CONJURING 2 has it, Lorraine is also experiencing disturbing visions that gradually become relevant to the Hodgson case.

Screenwriters Carey W. Hayes & Chad Hayes (who wrote the first film) & Wan and David Leslie Johnson explore the skepticism surrounding the “Enfield haunting,” with the evidence presented to the public. In the film, the proof provided to the main characters is part of the dramatic license, not the historical record.

However THE CONJURING 2 is intended as straight-up horror, not an op-ed piece on what did or didn’t happen. Wan shrewdly borrows from the mythology and imagery of his movie INSIDIOUS to amp up the creepiness factor here.

The dynamic between the Warrens has switched around for CONJURING 2 – this time, Lorraine is the one who thinks they should stay home and Ed is the one who feels the call of duty. As before, Farmiga and Wilson bring warmth and humanity to characters who could easily come off as saintly caricatures. Frances O’Connor is first-rate as Janet’s distraught mum and young Wolfe is exemplary with the wide-ranging demands of her role. Maria Doyle Kennedy and Simon Delaney make a big impression as a very helpful neighboring couple.

THE CONJURING 2 isn’t going to make believers out of doubters, but that’s not its intention. As a mainstream fright fest about an extra-ferocious haunting, it succeeds in delivering on its promises.