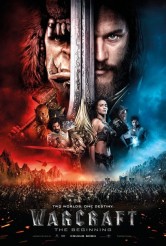 First off, WARCRAFT is a movie. Not just in the sense that it’s getting a theatrical release, with projectors and ticket stubs and popcorn and all that good stuff, but also in the sense that its makers have worked at creating characters who have motivations and relationships and ambitions, played mostly be adept actors. WARCRAFT also happens to be handsomely made and full of action, but that’s par for the course with a major studio adaptation of a videogame. Is it the best sword and sorcery to be had these days? Even if GAME OF THRONES weren’t around (and it is), the answer would still be “no,” but WARCRAFT has enough sense of internal conviction and general movie chops to be worthwhile.

People who know far more about Blizzard Entertainment’s mega-hit WARCRAFT game have said that the film, credited to screenwriters Charles Leavitt & Duncan Jones (Jones also directed), from a story and characters by Chris Metzen, actually has its roots in the very first iteration. This is the pre-history of the Massive Multiplayer Online Game that WARCRAFT aficionados know today.

To start things on a note of welcome novelty, we are introduced to events not by any of the traditional heroes, but by Durotan (motion capture performance genius Toby Kebbell), an orc chieftain who is part of the larger orc Horde. As we gradually learn, the orcs’ world has been decimated, but their sorcerer Gul’dan (Daniel Wu) creates a gateway to a green new land inhabited by other species, including humans. Since Orcs like nothing better than fighting and conquering, this sounds great to them, though Durotan worries about the health of his fierce, very pregnant mate Draka (Anna Galvin).

In the medieval kingdom of Azeroth, on the other side of the gateway, the Orc incursion is met with consternation. Warrior Anduin Lothar (Travis Fimmel) and runaway student mage Khadgar (Ben Schnetzer) are sent by King Llane (Dominic Cooper) to seek out the elusive chief mage and realm guardian Medivh (Ben Foster) to find out what’s happening. Also in the mix is half-orc/half-human warrior Garona (Paula Patton), who has been badly treated by the orc community, but still despises the weakness of humans.

Slight spoiler: since the Horde is a huge part of Warcraft, it’s not going to be that easy to get rid of them.

WARCRAFT manages to generate some ethical as well as physical conflict, as Durotan is a very honorable being on his own terms, even if he’s completely happy wading into battle against people who are just defending themselves. It’s also fun to watch the workings of the orc characters, as their proportions are novel and their faces are expressive, even with the makeup and motion capture. Durotan’s conundrums, as he begins to see the flaws in Gul’dan’s leadership, find some parallels on the human side.

However, when we get into human royalty, warriors and mages, it feels like so much plot has been crammed into comparatively limited screen time that we don’t get the same sort of depth with them. That said, Foster has completely thought through what he’s doing, and is persuasive in his wizardly depression. Ruth Negga, in a small role as the queen, is warmly regal.

The 3D is used deftly, giving us big crowds and large vistas for all of that crafted war, and the costumes and production design are sumptuous. Care has been taken to differentiate the hairy, hulking orcs from one another.

There aren’t as many grace notes here as there could be, but WARCRAFT rumbles along, keeping us trying to guess how various alliances will form or fall apart, and how a number of combat sequences will play out. It’s got a good story, it looks fine (apart from a bit of skitter CG near the beginning) and it’s made by people who seem to truly care about what they’re doing. It’s not Westeros nor Middle Earth, but it largely is what it’s trying to be.