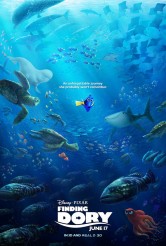 Pixar charm and a message 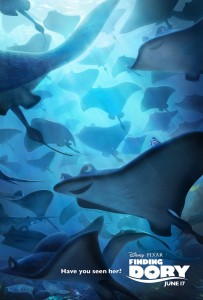 FINDING DORY is a sequel faithful in both form and content to 2003’s FINDING NEMO. In the earlier film, little clownfish Nemo is scooped out of the ocean and put in an aquarium, leaving his distraught father Marlin (voiced by Albert Brooks) to try to find and rescue him, with help from memory-impaired blue tang Dory (voiced by Ellen DeGeneres).

In FINDING DORY, Dory is reminded of the fact that she has parents. When she swims off in search of them, Marlin and Nemo (voiced here by Hayden Rolence), worried for her safety, go after Dory. People who loved and/or grew up with NEMO will find familiar imagery here: the beautiful, breathtaking rendering of not only sea life, but also the seawater itself; an aquarium; birds; dopey humans.

The imagery is awesome, and brings together a photorealistic style with more humorous caricature, letting both exist in the same universe. This in itself is impressive. Unless somebody is immune to Disney/Pixar emotions, Dory’s quest will bring a tear or two.

Then again, the tone here is a little softer and safer than in the original NEMO. Apart from one rather brief sequence early on, the sea is surprisingly free of predators, and while humans may still be doofuses, they mean well. Dory encounters people (fish, animals) who are harried or impatient, but no one is deliberately cruel to her, and any literal fish-out-of-water jeopardy is played down to the point that we never worry that anyone or anything is in mortal peril.

Dory is a character with a mental difficulty – she has almost no short-term memory, as she explains to acquaintances new and old. This means that she repeats herself a lot and keeps getting lost. Director/writer Andrew Stanton, who also wrote and directed NEMO and crafted DORY’s story with Victoria Strouse & Bob Peterson, and co-director Angus MacLane have to work hard to keep this from wearing on us. Sometimes the pacing gets away from them.

Much of FINDING DORY is concerned with Dory, Marlin and Hank, a cranky but helpful octopus (voiced by Ed O’Neill), in proving that our blue-and-yellow heroine is actually brilliant in her own way. We can identify with Dory seeking her family, and with Marlin and Nemo wanting to help and protect her. We also feel deeply for Dory when she’s terrified that she’s ruined things due to her confusion. However, when Marlin starts musing on Dory’s unique problem-solving skills, it seems like we’re being asked to like her because of special abilities that are just now being pointed out, rather than because of her innate warmth and other qualities that we already appreciate. This is also brought up so much that it seems the filmmakers are afraid that maybe the viewers have short-term memory issues, too.

There are moments of inspired hilarity, many of them supplied by Idris Elba and Dominic West as a pair of seals – there’s a running gag with them that never fails – and by octopus Hank’s master of disguise flair. The familial love within between Dory and her parents and the bonds between Dory and her friends are touching, the movie is beautiful to look at and it’s entertaining. FINDING DORY lacks the spark of something truly new that illuminates the best of Pixar, but it still works.

People enjoying the film should definitely sit through the fully-animated closing credits, which cap with a delightful end scene.

PIPER, the CG-animated short that accompanies FINDING DORY, is delightful. A realistic-looking beach scene closes in on a baby sandpiper learning to deal with the sand and the tides. It’s inventive and charming.