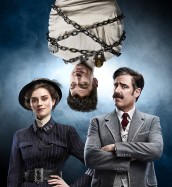 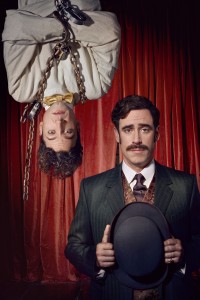 David Hoselton serves as show runner and one of the executive producers on Fox Network’s HOUDINI & DOYLE, Mondays at 9 PM. In the series created by David Titcher, Harry Houdini (Michael Weston) and Sir Arthur Conan Doyle (Stephen Mangan) team up with Constable Adelaide Stratton (Rebecca Liddiard) to solve possibly supernatural crimes in 1901 England. The show is a co-production of Fox, Britain’s ITV and Canada’s Shaw Media.

ASSIGNMENT X: How much did you know about the real Houdini and the real Doyle at the start?

DAVID HOSELTON: You know what I’m a big Doyle fan, big Houdini fan, big Sherlock fan, so I knew that, but I never knew that [in real life] they were friends, that they had a relationship. And so when I heard that, the pitch being, “Houdini and Doyle team up to investigate paranormal events,” boom, I was so sold, and I was so on board, I just went nuts on it.

AX: How did you come to be involved with the project?

HOSELTON: David Shore and I went to law school together at University of Toronto, and we worked on the school newspaper for the first time. That was our first writing collaboration. And then it wasn’t until many, many years later and he had HOUSE. I came on as a writer in Season 3, and I was there for the next six seasons, and it was just fantastic working for him, and then this idea came up, he was looking for a show runner, somebody to write the pilot, and I just – when I heard about it, I went to him and I said, “You’ve got to be kidding me, let’s do this.” And it was just such a natural fit. And I also think there are a lot of elements of HOUSE in this show, in that you’ve got this cynical Houdini and then the more credulous, or more spiritual [Doyle], like the Wilson character, who sort of is willing to give people the benefit of the doubt, and is a bit of a light-sider, as opposed to the dark side. So we were able to draw a lot on that. Obviously, that was a very successful character pairing, so it really fit like a glove.

AX: How did it come to have so many countries involved with the production?

HOSELTON: One of the things I think that’s fantastic about it is, when we first started this, it was going to be a Canadian/U.K. co-pro. So right away, you say, “Uh-oh. Our worlds are going to collide, and there are going to be all these different voices.” But I also think what’s happened is, we’ve got this symbiotic relationship, and it’s not a typically North American show, and it’s not a typical British show. Hopefully, we’ve pulled together the best of both worlds.

AX: It takes place in 1901, so the period may affect the stories more than where it takes place, but is there a difference between British paranormal stuff in 1901 and American and Canadian stuff in 1901?

HOSELTON: Not really. And I didn’t really want to play that difference particularly. First of all, because it’s so period, we’re already removed from contemporary audiences to those things, so there are things that came up, like Spring-Heel’d Jack, which we didn’t know about here. And so North American audiences are not going to have that – British audiences, the people I spoke to, said, “Oh, yeah, we know about him.” So there are things that North Americans are going to be more familiar with, things that the Brits are going to be more familiar with, but we didn’t really draw a giant distinction between the kind of paranormal cases.

AX: When you were casting Harry Houdini and Arthur Conan Doyle and Adelaide Stratton, what were you looking for in those people?

HOSELTON: For Adelaide, I was always looking for a combination of vulnerability and strength. Maybe that’s kind of an obvious thing, but a lot of the actresses that came in to read, the easy way that they went for is sort of this ball-busting, very dominant woman. It was, “I’m the first female cop, and so I’ve got to really kick a lot of ass.” And to me that was anachronistic, and not that interesting. I’d kind of seen that before. It felt like that’s the typical female cop that you see in contemporary television today. What Rebecca brought was a sense of vulnerability, but also this sense of inner strength that you knew she could only be pushed so far, and that she’s willing to take a certain amount of crap, because that’s how you need to play the game to survive in that world at that time, but you can’t push her too far. And she’s able to do that with such subtlety that I just love it. As for the other actors, the one thing that we were always looking for, aside from being great actors, is a sense of humor, because we always imagined this as being not necessarily an out and out comedy, but a drama that has a lot of comedic elements in it. And we wanted two actors that were able to play off each other, and have that banter, and have that kind of love/hate relationship, so you buy that they have problems with each other, but also that there’s an underlying respect.

AX: You make that clear at the end of the first episode by showing that Houdini has the collection of all of Doyle’s Sherlock Holmes books …

HOSELTON: Houdini is the sort of character who will never say, “Hey, I like you or respect you.” He’s too afraid of that, of being vulnerable. But secretly, he’s always admired this guy.

AX: Are you adapting any Holmes stories as adventures that they investigate, or would that be too meta?

HOSELTON: Well, that’s what SHERLOCK is doing, they take a lot of spins on it. And so we haven’t done that. The closest things we’ve done is, we’ve laid in some Easter eggs with character names and some things that may inspire him for later stories and things like that. But so far, we have not really drawn from the stories themselves.

AX: Besides the fact that Houdini and Doyle were friends, did you learn anything that particularly surprised and energized you in the course of doing the research?

HOSELTON: Well, this is a real minor thing, but one thing that I learned is that the women’s suffrage movement, they didn’t want the right to run for office, they just wanted the right to vote for the men to run for office. The notion of a woman running for office, that was even out of the scope of what the suffragettes wanted at the time. And one thing that surprised me is, we went through all these issues that were going on at the time, 1901, a hundred and fifteen years ago, like women’s rights and children’s rights and the Church. We looked at today and went, “All the same issues.” We still have a lot of these problems. From a writer’s point of view, it’s fantastic, because it makes it very contemporary and very relatable. From just a human point of view, it’s very sad that we’re still grappling with these things, a hundred and fifteen years later.

HOSELTON: We have a ten-episode order. The first eight were shot in England, the last two were shot in Canada. That was a financial requirement, that we needed to split the budget between the two countries. So we had our team travel to Canada for the final two episodes.

AX: Were there any Houdini stunts that you deemed were too much of a risk for the actors?

HOSELTON: No. That water tank, that was one that I always thought appeared to be a relatively easy thing to do and to pull off, and it ended up being really, really scary and dangerous. So after the fact, we kind of went, “I’m glad we went in ignorantly, because we wouldn’t have done it if we had known what we were doing.”

HOSELTON: I guess that they’re both characters in transition. They’re both learning about their own philosophies and questioning their own philosophies, like I think we all do as we go through life. So that’s what I want to reflect. I wanted to say, as hardcore as we feel about our beliefs, they can always be shaken, and they can always be questioned.