Game of Thrones Review No One 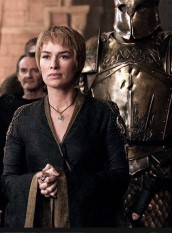 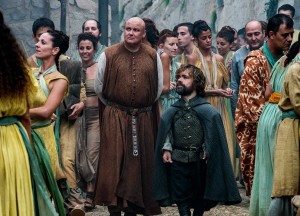 As might be expected from its title, “No One” is a big GAME OF THRONES episode for Arya Stark (Maisie Williams). Arya had been trying to become “no one” to serve the Many-Faced God, but found she couldn’t kill people simply because she was ordered to do so.

In Braavos, the wounded Arya receives help and shelter from the actress Lady Crane (Essie Davis). Lady Crane has dispensed with her would-be rival by marring the other woman’s face, and she proves good at stitching up injuries. Lady Crane invites Arya to join the acting troupe and travel with them, but Arya fears that the Waif (Faye Marsay) will endanger any companions she has.

Alas, Arya is right. The Waif kills Lady Crane, then chases Arya through the streets until she has her cornered in a dark underground chamber, illuminated by a single candle. However, this is where Arya has her sword. Also, remember all that time Arya spent blind? She uses the sword to cut the candle. When Jaqen H’gar (Tom Wlashchiha) is in the face room of the Many-Faced God, he finds the Waif’s face on the wall. He is impressed with Arya, and says she is now truly ready to be “no one,” but Arya declares that she is Arya Stark of Winterfell, and ready to go home.

Bravo to the actress, the writers and the character. This is as suspenseful as it is satisfying.

The Hound (Rory McCann) catches up with most of the men who murdered Brother Ray and his flock. Four against one, and the Hound doesn’t even break a sweat wielding his axe. The remaining men have been captured by the Brotherhood of the Red God, or at least a small band led by the resurrected Beric Dondarrion (Richard Dormer). Even though they tried to kill each other at their last meeting, Beric urges the Hound to join them as they head north to fight what’s coming. The Hound considers it.

In King’s Landing, the Hound’s bigger, meaner brother, the Mountain (Hafpor Julius Bjornsson), is now resurrected and acting as bodyguard for Cersei (Lena Headey). When a group of the Faith Militant, led by Cersei’s ex-lover and cousin Lancel Lannister (Eugene Simon), demand that Cersei come with them to see the High Septon (aka the High Sparrow), she refuses. When Lancel says if she doesn’t comply, there will be violence, Cersei says, “I choose violence.” The Mountain easily rips the head off a member of the Faith Militant, which makes quite an impression. Cersei has been hateful and the Mountain has been appalling, but we can’t help but be on their side here.

Alas, this incident works against Cersei soon afterward, when her son King Tommen (Dean-Charles Chapman) announces first that he’s set a trial date for Cersei and Queen Margaery’s brother Loras, and second, that he’s outlawing trial by combat. Cersei was counting on the Mountain to win her freedom, but now she’s in great trouble – although Qyburn (Anton Lesser) gives her some information that may help her.

Seeing what a mess has occurred when Cersei tried to enlist the aid of the High Sparrow, we have concerns for what’s happening in Meereen. Tyrion’s (Peter Dinklage) scheme to get the followers of the Red God to preach cooperation with Daenerys seems to be going well enough for now, but Lord Varys (Conleth Hill) has his doubts. Varys also must go to Westeros to further a new plan, which Tyrion approves of, though it’s clear the two men will miss each other. Heck, we’ll miss the two of them together as well – the Tyrion and Varys scenes have been highlights of every episode where they’ve occurred.

Tyrion then insists that Missandei (Nathalie Emmanuel) and Grey Worm (Jacob Anderson) drink with him. He wistfully tells them his dream of someday having his own vineyard, and even gets them to tell jokes. This sequence has a bit of a different tone from most of the others in GAME OF THRONES, with its social awkwardness, desperation for some kind of connection, and the characters’ general realization that they barely understand each other. It is sweet and sad.

Then the alarm bells ring and the bay fills up with slaver ships. As the slavers fire on Meereen, Grey Worm takes charge – he’s the warrior here, after all – and decides that the Unsullied should defend the citadel. Before things get a whole lot worse, Daenerys (Emilia Clarke) returns, and we see her dragon Drogon flying in the distance.

Everyone is glad to see Daenerys. Let’s hope that Drogon knows the difference between enemies and allies, but it seems like the tide in the bay is turning.

Brienne (Gwendoline Christie) and Podrick (Daniel Portman) arrive at the siege of Riverrun. Brienne is granted an audience with Jaime (Nicolaj Coster-Waldau), who is impressed that she’s managed to fulfill her quest of finding and protecting Sansa Stark. Since Brienne is here to try to get the Riverrun soldiers to aid Sansa in retaking Winterfell, and Jaime is trying to take Riverrun, they would seem to be at cross-purposes. Brienne gets Jaime’s permission to try to win over the Blackfish (Clive Russell). At first, the Blackfish claims to disbelieve that Brienne is really there on Sansa’s behalf. Then he admits that he doesn’t have enough men to aid Sansa. Brienne asks Podrick to send a raven to Sansa, explaining that Brienne has failed.

Jaime at first tries kindness with hostage Edmure Tully (Tobias Menzies). Not surprisingly, this doesn’t work. Jaime then is perfectly honest – he loves Cersei, and he’ll do whatever it takes to get back to her, including slaughtering Edmure’s infant son. This is the kind of scene that we get on GAME OF THRONES, but few other series. We see Jaime both as the shrewd, resourceful, passionate man we’ve come to like, who has the good sense to respect and aid Brienne, and as the absolute monster he is in Edmure’s eyes. And Edmure has a point. From one perspective, Jaime Lannister is inexcusable, and neither Jaime nor the writers try to modify the terrible aspects of his behavior. We are left to our own views, and our own levels of comfort or discomfort with them, and that’s rare as well, at least at this level.

In despair, Edmure demands the Riverrun soldiers to let him into the keep – he is the lord of Riverrun, after all. The soldiers obey, and Edmure orders them to lay down their arms and lower the drawbridge. The Blackfish helps Brienne and Podrick escape by boat, but won’t come with them. He dies fighting (offscreen). Jaime sees the boat. He waves at Brienne, she tentatively waves back, and both they and we give a huge sigh of relief that it didn’t come to Brienne and Jaime having to fight one another, as Brienne had feared.

“No One” is classic GAME OF THRONES – great dialogue, bloody violence, fear and exultation.