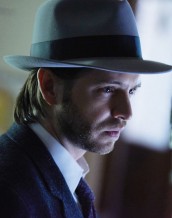 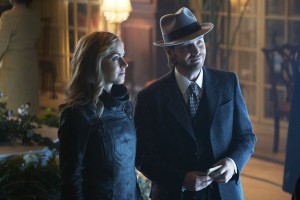 12 MONKEYS, now in its second season Monday nights on Syfy Channel, is based loosely on the 1995 film. In both, a man named James Cole (played by Aaron Stanford in the series, Bruce Willis in the movie) travels from the near future to the past. The difference is that in the 12 MONKEYS TV version, Cole is here to prevent rather than merely observe a viral outbreak that devastates the human species. Cole finds an ally in 2015, Dr. Cassandra Railly (Amanda Schull). However, as they travel to past, future and present, Cole and Railly find themselves susceptible to the Butterfly Effect, a theory that dictates that any one small change in one place – say, the present – can create enormous changes in another (like the future).

Terry Matalas, who co-developed the 12 MONKEYS series with Travis Fickett and serves as the show runner, talks about Season 2.

AX: Was it a problem in the writers’ room to figure out how you can have any standing sets without Butterfly Effecting them all out of existence?

TERRY MATALAS: No, that’s the fun. The fun is, you want a standing set with Butterfly Effect changes of sets that you see throughout time and the season. We do change our environment.

AX: Without getting spoilery, do you have a favorite scene or plot development or episode from Season 1?

MATALAS: I think it’s the standoff in the finale between Cassie, Ramsey [Kirk Acevedo] and Cole, and watching the core three characters struggle to understand each other. It’s very much the starting point for Season 2.

AX: Can you tease any guest cast for this season?

MATALAS: Absolutely. There’s Madeleine Stowe, there’s Brendan Coyle – Bates from DOWNTON ABBEY – there’s Jay Carnes, one of my favorite actors from THE SHIELD, Matt Frewer from ORPHAN BLACK, I love him, Xander Berkeley is back as well this season, who played Foster in the first season. We’re glad to have him back.

AX: Madeleine Stowe was the female lead in the 12 MONKEYS film, will be appearing in the series. Can you say who she’ll be playing?

MATALAS: I can tease that she is playing a patient in a mental asylum in 1959, who may or may not know quite a bit about the mythology of the show, and will give Cole some much-necessary time travel advice.

AX: You also have a very elegant hotel as one of your main sets for Season 2. Is this hotel something we’ve encountered in Season 1?

AX: Just to keep the budget somewhere in check, do you do a lot of the changing time periods within the hotel?

MATALAS: No. We have many, many locations, actually. We are very, very ambitious this year. The hotel serves as as the jumping-off point [where] they have a meeting place that they can always go to throughout time, but for them, it’s decorated and filled with pieces of their other adventures that they might not have had yet.

MATALAS: Toronto. And we went to Budapest this year as well.

AX: What is in Budapest that you need for your production?

MATALAS: Oh, so much scope and a lot of European flair, and also some older architecture that can double for the 1950s and whatnot.

AX: Does that give you any kind of budgetary break?

MATALAS: It does help budget-wise, but it’s really about giving the show scope, it’s about making the show bigger.

AX: You have one character who seems to be becoming a little less antagonistic …

AX: Do you have any characters who are becoming darker?

MATALAS: Yes. Cassie is definitely on a darker journey this season.

AX: Did you call the character Cassandra because of the prophet Cassandra in Greek mythology?

MATALAS: Well, that is the reason we changed her name. In the movie, her name is Kathryn, and we changed it to Cassandra, because in the myth [she is] someone who knows that the end of the world is coming and nobody believes her.

AX: Have you learned anything doing first season that is making second season easier to make?

AX: And what would you most like people to know about Season 2 of 12 MONKEYS?

MATALAS: That it is absolutely epic in scope, that the adventure and the romance of it all is a lot bigger than Season 1, and you can jump right in.