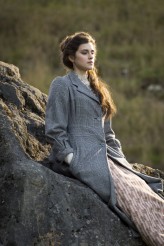 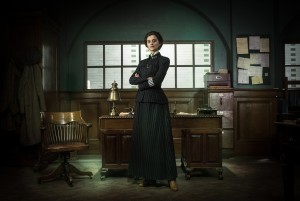 In Fox Network’s HOUDINI & DOYLE, Rebecca Liddiard plays the third lead character, Adelaide Stratton. In 1901 London, Adelaide is the first female police constable. She’s assigned to keep an eye on the skeptical Harry Houdini (Michael Weston) and the spiritually-inclined Sir Arthur Conan Doyle (Stephen Mangan) as they investigate some very peculiar mysteries that the regular authorities are inclined to ignore.

Liddiard, a Canada native, was a series regular on MSLABELED and appeared in BETWEEN, MURDOCH MYSTERIES, and the film WITH HER. At a party thrown by Fox Network for the Television Critics Association press tour, she talks about playing a character forging new ground in her day.

ASSIGNMENT X: Were you interested in 1901, when HOUDINI & DOYLE takes place, before you were cast in the show?

REBECCA LIDDIARD: Oh, yeah. I had wanted to do a period piece since I was a kid. In fact, I would say that’s why I became an actor, because I love the costumes and I love the stories, the historical fiction aspect. I grew up watching ANNE OF GREEN GABLES and THE ROAD TO AVONLEA and all those kinds of shows. This role was a dream come true.

AX: What are Adelaide’s ambitions? Where does she think she can get it she succeeds in her current job?

LIDDIARD: Well, that’s an interesting question. And over the course of the series, we learn more and more about Adelaide’s personal story, and we find out that she became a police officer for a very personal reason, and she is actually trying to solve her own personal mystery, and that storyline, which develops more and more after about Episode Four, informs how she deals with all of the preceding cases, and it’s actually what takes them to America. They leave England and go to America to help Adelaide.

AX: What is Adelaide’s attitude towards Houdini and Doyle? Is she impressed at all with either or both of them, or does she just sort of see keeping an eye on them as like, “Yay, my bosses are letting me investigate something”?

LIDDIARD: Well, definitely a little bit of the latter. She’s just very enthusiastic [to have] an opportunity. But these guys were huge celebrities, and particularly in England, Arthur Conan Doyle is a big celebrity, very respected. Houdini, a big celebrity, but she maybe has a little less respect for him. So while they treat her in a certain way because she’s a woman, she treats them in a certain way, because she has a preconceived notion of who they are.

LIDDIARD: I would say Adelaide has an open mind. Yes, she’s very logical and practical, but she’s constantly being swayed one way or the other, and she’s very honest about her naïveté about the world, and she keeps an open mind. She is willing to accept the possibility of everything.

AX: Much of HOUDINI & DOYLE was shot in England. Had you worked in England before?

LIDDIARD: It is different. On a technical level, their unions are organized differently, and so one big difference is, they don’t do overtime. So that changes the dynamic of the pace of work. It was very vigorous, because there was no overtime whatsoever, so you had twelve hours to finish your work. So it was very vigorous in that sense. It was not necessarily good or bad, it was just something you had to adjust to.

AX: Were the American sequences shot in Canada?

AX: And did you have to learn how to do anything for the part, like how to run while wearing a corset? That seems like it would be difficult because of the restriction in breathing.

LIDDIARD: Yeah, that was difficult. So that was sort of an unforeseen lesson, that was a crash course in running in a corset. I also had to do a British accent, so I worked with a dialect coach for several weeks before we started filming. Luckily, I trained in theatre, and so I have worn a corset before and performed in one, although not to that extent. So I was able to negotiate that without too much trouble.