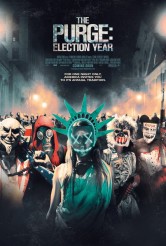 Another in the series of agit-prop actioners 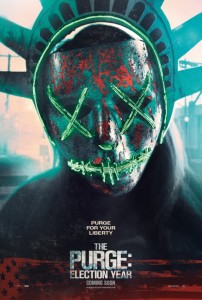 After the original 2013 THE PURGE and its sequel, 2014’s THE PURGE: ANARCHY, writer/director/film series creator James DeMonaco is back with THE PURGE: ELECTION YEAR. The biggest joke may be that what’s going on in the real world this year, politically and otherwise, has become so insane that what started as action horror/farfetched political satire now seems like something that’s not altogether out of the realm of possibility.

For those unacquainted with the U.S.A. of the PURGE-verse, the New Founding Fathers of America some years back devised the Purge, a once-a-year dusk-‘til-dawn period during which all crime, including murder, is legal. Purge advocates point to the downturn in crime the rest of the year. Purge detractors claim (with reason) that the Purge targets minorities and the poor, who can’t find safe shelter during the night.

In THE PURGE: ELECTION YEAR, Senator Charlene Roan (Elizabeth Mitchell) is running for U.S. president on an anti-Purge platform. Her opponent, government minister Edwige Owens (Kyle Secor), thinks the Purge is a great thing, as do his backers. Indeed, they think this is a great time to remove the legal protections that formerly kept officials safe during the Purge, so that an assassination attempt on Roan will be legal. However, they reckon without Barnes’ chief of security, Leo Barnes (Frank Grillo, reprising his ANARCHY role).

Elsewhere in D.C., convenience store proprietor Joe Dixon (Mykelti Williamson) decides to defend the premises when his Purge insurance is abruptly canceled, his friend Laney (Betty Gabriel) cruises the streets in an illegal Good Samaritan van, and activist Dante Bishop (Edwin Hodge, back from the first two PURGE movies, may have more on his mind than just rhetoric this time.

THE PURGE: ELECTION YEAR is modestly budgeted, but still big enough and loud enough for its own purposes. DeMonaco continues to stage bloody craziness and brutality, but still give righteous pushback. The PURGE films are in fact a bit like MAD MAX movies – taking brutality into the realm of horror, then delivering kickass vengeance. Granted, the most high-minded characters here are true to their (relatively) nonviolent convictions, but they seem to be the PURGE’s version of lip service. The movie wants to talk about abuse of power, writ large, and then the satisfaction of getting rid of it.

Any similarity between the rhetoric we hear in THE PURGE: ELECTION YEAR and on the real nightly news appears wholly intentional. In fact, get distracted even a tiny bit, and you may think the arguments are about gun control instead of twelve hours of lawlessness.

There is, of course, plenty going on here. We wonder how and why our main characters will link up, who will survive, and what kinds of madness they’ll encounter in the darkness.  Brittany Mirabile makes a memorably psychotic teen shoplifter. Within the cast, Williamson and Gabriel are standouts, and Grillo is solid. Mitchell seems a little too sweet to be a career politician, but Raymond J. Barry hits all the right notes as a mover and shaker who feels entitled to everything he’s got.

THE PURGE: ELECTION YEAR has its saggy moments. When the plot strands start overlapping and the good guys have to confer about what they’re doing and why, the momentum slows. Then again, the wild, revved-up parts are zesty and demented. Much of THE PURGE: ELECTION YEAR may remind you of low-budget Seventies science-fiction, the kind where filmmakers had something they wanted to talk about and trusted they’d find the right audience. There’s something very hopeful in that. And, for those who like this subgenre, this is one of the good ones.