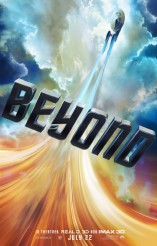 TREK-verse, for better and worse 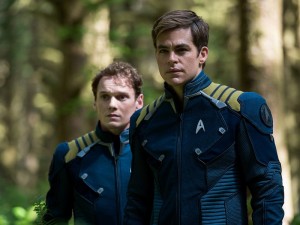 STAR TREK BEYOND is one of those franchise movies that is so completely bound to its specific film universe that it feels kind of like a big, long episode of a TV series. Except it doesn’t feel like a big, long episode of any of the TV iterations of STAR TREK, originally created by Gene Roddenberry, that preceded it. It’s very much in keeping with the STAR TREK reboot-verse first begun in 2009 by J.J. Abrams (who directed the first two and is an executive producer on this one).

All of this is to say that people who liked the ’09 STAR TREK and 2013’s STAR TREK INTO DARKNESS should like STAR TREK BEYOND and people who didn’t like the first two won’t like this one. The uninitiated (should such creatures exist) will be divided between those who like spectacle combined with philosophical comfort food, and those who object to one, the other, both or this specific presentation.

STAR TREK BEYOND is scripted by Simon Pegg (co-writer and star of SHAUN OF THE DEAD, as well as playing Engineer Montgomery “Scotty” Scott in the TREK reboots) & Doug Jung (who has a cameo here), and directed by Justin Lin. The movie starts out by Velcroing its boots together with a frenetic sequence that tries too hard to be funny, followed by Captain James T. Kirk (Chris Pine) declaring that, essentially, he’s bored with the five-year mission.

This is pretty dangerous territory. If even Captain Kirk thinks it may not be worth venturing out to explore strange new worlds any more, how is the audience supposed to feel? We get a little too much time to think about this before STAR TREK BEYOND gets into its plot. Without giving away too much, suffice to say that there’s a deadly weapon, a plot against the Federation and the need for Kirk and Co. to save the galaxy.

Once the movie gets in gear, it has some great visual sequences. While it doesn’t absolutely, positively have to be in 3D, director Lin utilizes the format well and gets some good sense of space (in all senses of the word) from it. The editing is sometimes overly frenetic; it’s one thing to create a sense of urgency and another to create imagery so chaotic that it’s unclear what we’re watching.

There’s a lot of creativity here, including the nature of the danger and good work from all hands. The primary issue driving the story is both perfectly sound for STAR TREK –

Roddenberry would surely have approved – and sadly timely for what’s going on at present in the world. Idris Elba is excellent (does anyone expect less of him?) as the primary antagonist, and Sofia Boutella is enjoyable as a spunky alien.

At the risk of being spoilery – stop here if you don’t want to know anything at all going in – STAR TREK BEYOND may provide some catharsis for fans still processing the real-world death of Leonard Nimoy. Here, Mr. Spock (Zachary Quinto) is informed of the death of Ambassador Spock and spends a fair portion of the film quietly coming to grips with the loss. It’s a worthy memorial, with one late moment guaranteed to touch hearts, no matter one’s overall reaction. There is no solace to be had for the untimely loss of actor Anton Yelchin, who plays Chekov once more with exuberance and received a dedication in the end credits.

Apart from the wobbly start, STAR TREK BEYOND fulfills its mission parameters. One’s enjoyment level depends on a personal view of whether this is a mission worth embarking on at all.