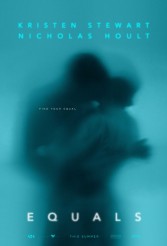 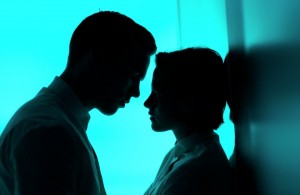 In a number of ways, EQUALS resembles quite a few screen adaptations of young adult dystopian science fiction novels. In a future where people are born after having been subjected to neonatal injections designed to inhibit their emotions, Silas (Nicholas Hoult) and Nia (Kristen Stewart) fall in love.

So what makes EQUALS different? For starters, it’s not an adaptation, nor is it aimed at the YA market. Director Drake Doremus, who also created the storyline that’s scripted by Nate Parker, is so in earnest that there are no signs he knows he’s reinventing the wheel here. It’s not as though if you’ve seen one post-apocalypse, you’ve seen them all – for example, EQUALS could hardly be less like MAD MAX: FURY ROAD – but rather that the movie is so intent on exploring the inner lives of its lead characters that it doesn’t set up their world especially well.

A short but deadly worldwide war has eradicated ninety-nine percent of Earth’s resources. Although it’s not stated, it seems that it’s wiped out about that percentage of the human population as well, though civilization seems to have rebounded with great technological health. Beyond the city, where everyone dresses in white (a couple of rebels wear beige), there’s an overgrown peninsula, reportedly inhabited by savages.

We meet Silas just as he is becoming interested, despite himself, in coworker Nia. Just as Silas fears, he is diagnosed with “Switched-On Syndrome,” though right now he’s only Stage One. Switched-On Syndrome sufferers experience anxiety, depression, sexual desire. When SOS victims reach Stage Four, they are sent to the Den, a place of no return. Midway through the movie, a supporting character expresses the theory that the syndrome isn’t a disease at all, but a return to mental health. The inhibitor drugs meant to “cure” the population instead provide false calm. This insight is obvious, so we can’t tell if the statement is meant to enlighten the other characters, or if the filmmakers are worried we might not have figured it out yet.

There are a lot of questions that go unanswered about how things work. For denizens of a fascist state, Silas and Nia have a great deal of freedom of movement. Likewise, for people who are supposed to be chemically robbed of feeling, a lot of the characters express what looks like impatience, concern, sympathy and the like.

Even this isn’t as much of a problem as EQUALS’ definition of what is and is not emotion. Everyone in the new society is urged to have curiosity about the space program, and they are keen to be productive, be safe, have good jobs, etc. All of this is indicative of preference, which in turn indicates degrees of feeling. We could give EQUALS the benefit of the doubt and suppose that this is meant as subtle commentary on rules set up by officials who don’t understand what they’re actually doing, except that the film doesn’t seem big on subtlety. It also doesn’t seem to care about the inner lives of anyone except its leads, or to value any emotions other than sexual desire and romantic love. This simplistic approach is what makes it feel like a lot of movie adaptations of YA literature, though the literature itself is often much more sophisticated than it winds up as shown onscreen.

Hoult and Stewart are photographed as though they are the subjects of New York Times Magazine articles. They are often seen in dramatic close-ups, while behind them, the sparse indoor backgrounds are awash in orange or aqua hues. It’s very pretty in small doses, but doesn’t convey anything about what’s happening, so after awhile, it all starts to blur together.

There are some interesting, unusual locations – EQUALS was shot in Japan and Korea – that add to the visual appeal. Hoult and Stewart both convey persuasive longing, sorrow and intensity, and David Selby makes an impression as their caring boss (nobody seems to think that his wanting the best for his employees counts as emotion). If attractive people artfully photographed make you happy, EQUALS may work for you, but if you want a fully-thought-out speculative fiction premise, or even just a movie with momentum, this isn’t up to delivering it.