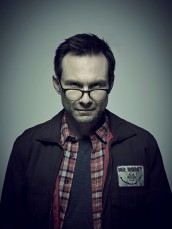 The actor talks about his hit USA Network series 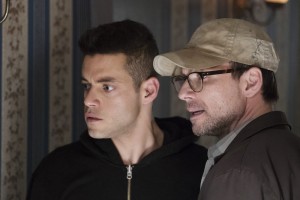 Christian Slater has won both a Golden Globe and a Satellite Award for his work in the title role of MR. ROBOT. In the first season of USA Network’s series – just nominated for six Emmy Awards, including outstanding dramatic series – created by Sam Esmail (who also directed all of Season 2), Mr. Robot at first appears to be the mysterious founder of F*Society. Mr. Robot recruits Rami Malek’s character Elliot Alderson, an isolated computer genius, to his cause of cyber warfare against giant corporations. However, by the end of Season 1, we and Elliot learn that Mr. Robot is a version of Elliot’s late father, part of Elliot’s subconscious, who alternately urges him on and cautions him.

In Season 2, now on USA Network Wednesday nights at 10 PM, the Elliot/Mr. Robot plan to wipe out worldwide debt has succeeded, leaving multiple new complications in its wake. It looks as though the relationship between Elliot and Mr. Robot is destined to grow much more complex as well.

AX: In the TV series MY OWN WORST ENEMY, you played a spy who sometimes believed he was his gentler family man alter ego, who didn’t actually exist. Do you see any similarities between that character and Mr. Robot, as they’re both aware they’re not quite real?

CHRISTIAN SLATER: Well, it’s nice to have Rami there, because when I was making that show [MY OWN WORST ENEMY], I was doing both roles, and that was truly challenging.

AX: When you’re doing scenes with more fellow actors than Rami Malek, are there things you can’t do to avoid blowing the scene, like making eye contact, or …?

SLATER: There are certain things. I’ll come in sometimes with ideas and again, fortunately, even when Sam wasn’t directing episodes, he was there ninety-eight percent of the time. So he was always there to kind of keep things on a particular track and very specific. And I like to come in with ideas and suggestions, and some he would like, and some he would be, ‘No, that might give too much away.’

AX: How worried are you that if Elliot ever gets himself together that there won’t be a place for your character?

SLATER: It’s up to Sam. At the end of the day, of course, we want Elliot’s character I think to recover and grow, and he’s definitely going through a lot of struggles, and if that means that Mr. Robot has to take a back seat, [he will]. I just have a feeling that Elliot is the type of character that in some regard, he will always be haunted. It’s definitely an interesting journey to be on, to see where this guy goes. I’ve certainly found myself at different times talking to people that aren’t there. You know, you just do it. Usually, it’s myself in the mirror, trying to give myself a pep talk or something like that, but we all have that in us.

AX: Is there any particular process in playing a character who is essentially someone else’s id?

SLATER: Well, I think the most helpful aspect was the fact that Sam was so open about sharing what the journey of the character was going to be. Because if he had kept it under wraps that I didn’t have the father/son relationship with Elliot, and had revealed that to me by Episode Eight or Nine, I think I would have lost a lot of stuff to play between the earlier episodes. So knowing that going in, I was able to kind of subtly [play that]. The relationship between a father and son is certainly going to be a lot deeper than it would have just been than had I thought I was just another person in his life.

AX: But in addition to being Elliot’s father, you’re also –

SLATER: A subconscious part of him. The yin and yang.

AX: But you are also playing a more primal part of Elliot …

AX: Do you go to Sam Esmail and say, ‘How much am I of one or the other of these aspects in this particular moment?’

SLATER: I do. I think the writing will reflect that at certain times, like the moments where Rami or Elliot isn’t even present, where Mr. Robot has completely taken over and is having scenes with Martin Wallstrom or some of the other characters. That’s when I think Elliot is probably at his most vulnerable and scared and unwilling to do some of the things that Mr. Robot, on the other hand, would be able to do. It’s like where Elliot wouldn’t want to pull the trigger, Mr. Robot, I think, is willing to do that.

SLATER: I’m a fan of anything Vince Gilligan does, I think he’s just unbelievable. I said David Fincher, I’m equally a fan. JUSTIFIED also was another big show for me.

AX: You and Sam Esmail and Rami Malek have all said you were expecting MR. ROBOT to be a cult hit that a few people would think it was cool to know about and that most people wouldn’t have heard about. Instead, it’s turned into a mass cultural hit. Is that success tipping the show in any way?

AX: Do you think that MR. ROBOT as a series is helping people understand and be more interested in some of its big concepts, like the whole notion of individuals being in debt to corporations, and what it might mean to erase that debt?

SLATER: I think so. I mean, just being part of the show for me personally has raised my level of awareness. I was never a guy who really paid that close attention to a lot of the things that were going on in the world, and even in my own life. So it’s raised my level of awareness, and I think if it can do that for others, that’s certainly serving a purpose and a benefit and any time you can raise people’s awareness in entertainment in any way, it’s like Alan Rickman’s quote – “A movie, a book, a television show, you can certainly make a difference.”

AX: Where are you going to keep the Golden Globe you won for MR. ROBOT?

SLATER: I’ve got a spot for it. My son, a couple Christmases ago, made me this sign that said, ‘Out of difficulties grow miracles.’ I’m Mr. Quote Guy today. I’m sorry, it’s embarrassing [laughs]. But he was like, ‘If you get it, Dad, you could put it next to that.’ So that’s where I’ll put it.

AX: Having gotten the Golden Globe at this point in your career, and not when you started acting, back when you were a child, and then a teen actor –

AX: Does it mean more now?

SLATER: Oh, yeah, of course. Twenty-five years ago – yeah, it happened exactly when it was meant to, I suppose, so I think I’m that much more grateful and that much more appreciative and thrilled about it, and I think hopefully able to keep it in the proper perspective.

AX: How do you think you would have handled the win twenty-five years ago?

AX: Has working on MR. ROBOT and seeing what hackers can do affected your behavior online?

SLATER: Online? I think updating passwords, of course, being a little bit more aware, certainly making the discovery that, as wonderful a thing as the Internet is, and what a magical power it has brought to all of us, it can also be a very dangerous tool, and I have two kids and it’s made me certainly a little bit more paranoid in regards to who it is they’re talking to, and has made me more protective about it. I’ve got monitoring devices, with their knowledge. As long as they’re under my roof, I’m going to make sure that [they are safe], to the best of my ability. It’s very, very difficult, because we’re living in a world where they invent things in order to hide things from parents. There are these sneaky creator app guys that will make to intentionally do that, to keep parents in the dark, and you’ve really got to work extra-hard to stay on top of it.

AX: What kind of feedback have you gotten from people about MR. ROBOT?

SLATER: Just people really appreciating it. I can walk down the street and people say, ‘Hey, Mr. Robot.’ That’s fun. It’s nice to have something that’s part of the current cultural flow.