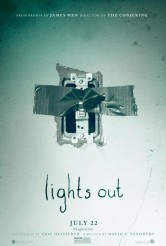 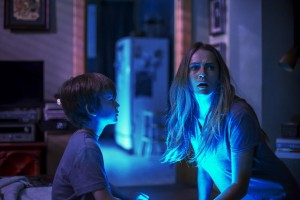 Here’s a nice surprise: LIGHTS OUT, a summer horror movie that has consistent and well-earned scares, a modestly novel premise and good story logic. It’s that relative rarity that doesn’t even suffer from its PG-13 rating – the gore is just enough to be jolting, but not so pervasive that it gets an R or holds up the pacing.

In LIGHTS OUT, an extremely nasty Something that manifests in the darkness – and has the power to turn off electrical illumination – manifests in a garment factory. It turns out this isn’t the first time the entity has shown up, and it won’t be the last. Young Martin (Gabriel Bateman) is losing sleep because this thing is stalking the halls of the big house where he lives with his unstable mother Sophie (Maria Bello). Martin’s older half-sister Rebecca (Teresa Palmer) has stayed away because she’s angry with their mutual mom for not looking after herself. Still, Rebecca takes Martin’s fears seriously.

LIGHTS OUT is based on a short film by David F. Sandberg, who provided the story and directs here. The script by Eric Heiserrer doesn’t overdo the exposition, but there’s a tantalizing notion here that the entity stalking the characters is not a ghost, but something even more sinister. The rules governing it are shown rather than simply related through dialogue, and the being’s shadowy appearance is plenty alarming.

The film’s internal mythology has a pleasing convergence of horror and science fiction. This isn’t just another tale of a vengeful spirit. Instead, we get layers of cause and effect that seem like they could work as the basis of a novel. This makes for a very agreeable change from the frequent illogic viewers have come to dread from the genre.

Sandberg is skilled at jump scares, setting them up so well that they work virtually every time, even when he visually informs us well in advance that another one is coming. He and Heiserrer also refreshingly let the conflict come with the main characters doing very sensible things; they are in danger because their adversary is powerful and wily, not because they are careless or clueless.

Although Rebecca starts out as a bit obnoxious, the writing and Palmer’s committed performance soon bring us around. Bateman manages to remain in a state of perpetual terror without overdoing it. The more we understand about what’s happening, the more sense Bello’s interpretation of Sophie makes. Alexander DiPersia plays Rebecca’s gentle, loyal boyfriend with understated warmth.

It would be a mistake to overstate the merits of LIGHTS OUT. However, it is everything we hope a summer horror movie will be: fright-filled, fun and inventive.