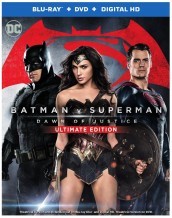 After spending years in development, what we got in BATMAN V. SUPERMAN left a lot to be desired. It was lambasted by critics for being too dark and too scatterbrain. Some fans also didn’t like it because it continued to portray Superman as a dark, brooding man with difficult morality choices and being extremely different from the comic books.

Now, I thought the original cut was actually pretty good. Definitely not perfect and a lot could have been trimmed and probably should have been trimmed. But flawed as it is we got an excellent Batman (Ben Affleck), some really good action scenes, a really good Wonder Woman (Gal Gadot) and a movie introduction to a lot of different characters in the DC Universe.

The extended cut makes everything better in terms of the plot and fleshing out many of the areas where audiences were confused or thought things just went way too fast for it to be meaningful. Those that hated it, will still hate it. Those that thought it could have been better if they did XYZ will probably think it is better because they did just that. Those that liked the original will only like this version better.

The extended cut adds 30 minutes to the original, which amounts to a whopping three hour movie that is granted a lot to take in all at once. However, it gives Superman and Clark Kent (Henry Cavil) a lot more to do and a lot more motivations as to why he takes the action he does against Batman and his decision on whether Earth is his home or not.

The opening desert scene, which Lex Luthor (Jesse Eisenberg) uses as a bridge to frame Superman for unnecessary deaths and a lynchpin for questioning his real intentions (which gives more fuel to Batman’s concerns), is fleshed out considerably so we see just what is going on. We see why Superman saves Lois, how they framed it to look like Superman used his heat vision and how Lois and poor Jimmy Olson arrived in the first place.

We also get much more in terms of Clark Kent being a reporter and investigating Batman’s brutality in Gotham, explaining why he views him as a problem in the world. Superman also gets more time to reflect on his position in the world and whether Earth is worth fighting for – something that comes into play at the end of the movie especially when he makes the ultimate sacrifice.

We see more of Lex’s motivations and plan to set them both up to face off against each other including using the wife of one of killed in the desert to lie for him. More about the bombing at Superman’s hearing and the role Lex plays in that especially when it comes to the so-called bomber (this is especially an interesting tidbit that was removed from the original). We also see Superman actually helping people after the bombing giving him more levity of the hero we think he his or should be.

Yeah the whole “Martha” thing is still there and it is still flawed but fleshing out much of the plot that was left to be too quick really gives the movie more substance as well as showing Superman in a surprising different light than the original does.