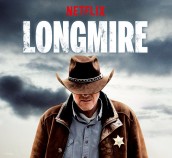 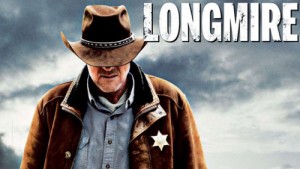 Lou Diamond Phillips shot to movie stardom playing real-life Fifties pop star Ritchie Valens in 1987’s LA BAMBA. Since then, he’s worked continuously in film (YOUNG GUNS, THE 33), stage (earning a Tony nomination for his portrayal of the King of Siam in the Broadway revival of THE KING AND I) and television (most recently, an arc on BLINDSPOT).

For the past four years, Phillips has played Henry Standing Bear on LONGMIRE. Based on a series of novels by Craig Johnson, LONGMIRE is a contemporary Western procedural, centering on Walt Longmire (Robert Taylor), sheriff of Absaroka County, Wyoming. Henry is Walt’s friend and liaison with the local Native American community. When Henry is arrested for murder, things get even more complicated than usual.

LONGMIRE spent its first three seasons on A&E. When that network canceled the series, Netflix picked it up, producing last year’s Season 4, and this year’s fifth season, which will premiere in September. All four previous seasons are currently available on the streaming service. Season 5 premieres September 23.

AX: When you took the role of Henry, did you realize that he was going to spend as much of his time in legal battles as he was in cowboy stuff?

LOU DIAMOND PHILLIPS: Not at all. That was an evolution of the characters that the writers introduced. I did my research and read a number of Craig’s books – I now have read all of them – he even asked me to write the forward to his collection of short stories. So I thought that I knew Henry inside and out. And starting with Season 3, the writers were throwing me curveballs. [I thought], “Wow, okay, how do I wrap my head around this?” and obviously, taking me into some uncharted territory as far as the books go, but really giving me a lot to do as an actor, and to expand upon the role as just a faithful sidekick. So for me, they have continued that path, and Season 4 really capitalizes on that. We see a lot more of Henry, we’ll see a lot more of his travails and challenges.

AX: Is courtroom drama a genre that you were ever interested in doing before this?X

PHILLIPS: Well, let me put it this way. I watch PERRY MASON every single night with my wife and my daughter. I haven’t done the courtroom drama in the way that I’d like to just yet, but the fact that Season 3 revolved a lot around Henry’s defense, and the fact that I got to work with Cassidy Freeman [who plays Walt’s daughter Cady] quite a lot was an absolute gift. I adore her and I think we have a particular chemistry as godfather/goddaughter on the show. And it’s one of the old standards in American storytelling, to have that innocent man accused of a crime and then, “How the hell are we going to get out of this fix?”

AX: Speaking of fixes, what was the timeline of A&E canceling LONGMIRE and Netflix picking it up?

PHILLIPS: There was a period of limbo where we knew that A&E had dropped us, and we didn’t know where we were going. We knew that there was interest from a number of places, we knew that Peter Roth was going to be our standard-bearer and our knight in shining armor, and we just had to wait for those conversations to happen and to see where they were going. Yes, the possibility existed that it would have been a fruitless search. Fortunately for us, Peter had the wherewithal to reach out immediately to Netflix, and it was just a perfect fit. And so thank goodness that we didn’t have to wait too terribly long.

AX: LONGMIRE also deals in part with the legal status of Native Americans. Do you have particular feelings about part of something that’s not normally examined on television?

PHILLIPS: We do a lot of things right on LONGMIRE, and one of them is how we treat Native American issues. And our writers have done an amazing job with their research. They find incredibly compelling ways to tell the stories. And what I’m thrilled about is, we have a huge Native American cast who’s come back, and we bring some of the stalwarts of the Native American community into our show. Obviously, A Martinez and Zahn McClarnan and Graham Greene are coming back, but we’ve added Tantoo Cardinal and Rena Owen and Julia Jones. Irene Bedard comes back as well, so amazing Native American actors.

PHILLIPS: Yes, but she is indigenous. And she’s playing Cheyenne – I’m playing Cheyenne, even though I’m Filipino-Scot-Irish [laughs]. So we’re dealing with stories that aren’t often told on television, played by people who have the veracity and authenticity to portray them.

AX: On Netflix, they put up all of the season’s episodes at once, so with the seasons that were made for Netflix, you don’t have all of the recapping you normally have on network …

AX: Given that there’s an expectation that people may binge-watch on Netflix, do you have less expository dialogue than you did when LONGMIRE was being made for basic cable?

PHILLIPS: One of the things about our show that I think is really wonderful is that we never have that kind of expository dialogue. We never have to be Morris the Explainer. Walt and Henry’s relationship has never had to be articulated, it’s very much between the lines in how we deal with one another. Every once in awhile, we’ll toss in a little nugget about our childhood, but it’s never been like one of those procedural shows where you have to absolutely connect the dots.

AX: Like, “Remember last week, when you were in court and you testified …?”

PHILLIPS: Yeah. We have none of that, because we respect the intelligence of our audience, and we expect them to keep up. We also don’t get as confusing as some shows I do on television. I mean, it’s a pretty straight-ahead through-line.

AX: Compared to other series you’ve done that have gone a few seasons, would you say there’s a different kind of atmosphere on LONGMIRE, or is it like a lot of shows, where you’re working with professionals, and everybody’s on the same page?

PHILLIPS: Well, it’s always a crapshoot, and to be honest, this is the longest-running television show that I’ve done. I was on STARGATE: UNIVERSE for two seasons; WOLF LAKE went nine episodes. In both of those cases, I was very fortunate to be involved with a lot of professionals – we were lucky to have that kind of a talented cast and those kinds of writers. I also recurred on NUMBERS off and on for four or five seasons. But I was not a regular – I popped in once or twice a season. So for me, LONGMIRE is a very, very special situation, because we started out with an absolutely A-list team, and it’s just gotten stronger and deeper, and the bond has cemented over the last four years. I think we continue to raise the bar, season after season.

PHILLIPS: THE 33 [released theatrically in 2015, now available on home video=, about the Chilean miners, that I costar in with Antonio Banderas and Juliette Binoche and Gabriel Byrne and an international cast. I play Luis Urzua, “Don Lucho,” the shift foreman, who is trapped down there with them. And then a really wonderful independent film, THE NIGHT STALKER, with award-winning writer/director Megan Griffiths. I play Richard Ramirez, the [real-life serial killer] Night Stalker.

AX: And what would you most like people to know about LONGMIRE?

PHILLIPS: That it continues to push the envelope and raise the bar.