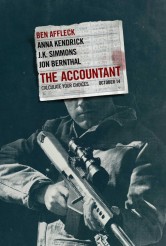 The ledger is unbalanced in this uneven film

The intentions behind THE ACCOUNTANT are broadly good. The filmmakers want to show the audience that people on the autism spectrum can be just as capable, if not more so, than neuro-typical (non-autistic) folks. There are certainly plenty of examples of autistic people who are extraordinarily gifted in fields like math and music.

We have plentiful flashbacks to Chris’ childhood, when his parents have very different ideas about what to do regarding his uncontrollable fits. Chris’ little brother is his only source of unconditional support.

As an adult, we see that Chris has poor social skills, but is a mathematical genius. He can spot patterns in a blizzard of numbers, though he still has trouble coping when not allowed to complete a task. He also has some extremely well-honed survival skills, thanks to childhood training.

When Chris is hired by a company that creates synthetic limbs for amputees, we meet its bosses (played by John Lithgow and Jean Smart). Chris also meets company accountant Dana (Anna Kendrick), who seems to have a milder version of the same symptoms that Chris exhibits.

In another plot strand, an assassin (Jon Bernthal) heads up a team that is targeting some of Chris’ clients.

All of the eventually does come together, but by the time it does, the suspension of disbelief required is more than most viewers will be able to handle. When one of the bad guys exclaims, “What’s happening?”, the audience is likely to share his incredulity.

There are some assets here, largely in the supporting performances. Simmons and Jeffrey Tambor, as Chris’ jailhouse mentor, are endlessly watchable, as is Smart. There’s also some charm in the tentative rapport between Chris and Dana and the action is impressive.

However, the resolution relies on a truly whopping coincidence that is not set up properly. Additionally, while Seth Lee as young Chris is convincing, Affleck’s adult Chris seems simply thoughtful, not either truly as obsessive or socially awkward as the script insists he is. Then there’s the matter of THE ACCOUNTANT’s notion of how Chris became so proficient in the violent arts. Without getting spoilery, let’s just say that parents of autistic children (or non-autistic children, for that matter) may not want to use this movie as a basis for decisions about how to help their kids cope with “the real world.”

THE ACCOUNTANT strains way too hard to provide a back story for a supporting character, when mere ambition would have sufficed as motivation. There also turns out to be a bond between characters who, so far as we can tell, met for the space of an afternoon.

Lastly, we start to worry early on when, to prove Chris really knows his stuff professionally, we’re treated to a scene of him going over tax deductions with an elderly couple. The accountant sounds like a real CPA, so the movie does its job there. But the experience of being in an office, listening to someone explain allowed work expenses, is just about the opposite of what most people want from an action thriller. If THE ACCOUNTANT were a little more lifelike, this might work. As it is, this indication that the filmmakers don’t know the difference between realism and boredom doesn’t inspire confidence. The movie gets more interesting from there, but it never gets more credible.