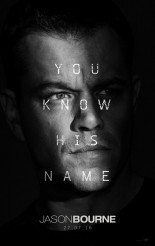 Well-made but not very distinctive

JASON BOURNE Director Paul Greengrass can do kinetic action with the best of them – he also helmed the last two Jason Bourne adventures, THE BOURNE SUPREMACY and THE BOURNE ULTIMATUM, as well as the riveting UNITED 93. However, Greengrass and co-scripter Christopher Rouse (who also serves as JASON BOURNE’s film editor) have centered the new film on the well-worn premise of “This time, it’s personal.” While this tactic explains why the various characters are so invested in what they’re doing, it also drains a lot of suspense from what is technically a thriller.

For those who’ve missed the BOURNE canon so far (starting with THE BOURNE IDENTITY and branching off into the Jason-less THE BOURNE LEGACY), Matt Damon stars as the title character, a super-spy/assassin who realizes he’s been brainwashed to think he’s someone he isn’t, courtesy of a now-discredited U.S. government program. In the previous films, Bourne, aka David Webb, fought his way up the CIA food chain to find out who was responsible for his amnesia and who it was that now wanted him dead.

With those issues apparently resolved at the end of ULTIMATUM (and Jeremy Renner filling in as another survivor of the program in THE BOURNE LEGACY), what’s left to do? Well, for starters, the CIA is still trying to capture or kill Bourne, who is living off the grid among refugees in Greece. Then there are the origins of the program and how and why David volunteered in the first place. Tie in a subplot that’s like a hybrid of a deadly serious SILICON VALLEY and MR. ROBOT, and there’s quite a bit happening.

The plotting is solid and provides a good basis for an enormous amount of hair-raising chases, shootouts and hand-to-hand combat. There are pauses so that characters can contemplate tactics and the audience can follow the plot. However, the overall effect is a perpetual motion machine.

Sometimes, this can work brilliantly (see MAD MAX: FURY ROAD). But in JASON BOURNE, we’re never given the little bits of personality that would let us latch on to the characters. We are inclined to root for Damon’s Bourne (or Webb) because he’s got some human decency and a lot of skills, but real emotional involvement is a stretch. Alicia Vikander’s rising CIA officer offers some intrigue, and Tommy Lee Jones is all silky evil as her boss, who wants Bourne in from the cold one way or another. Vincent Cassel is coolly proficient as an assassin. The liveliest character is Riz Ahmed’s tech genius, but we don’t get to spend much time with him.