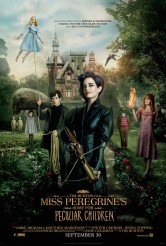 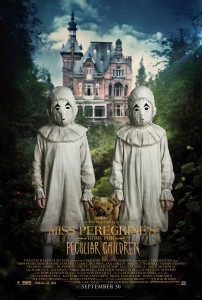 To the terms “super,” “powered,” “mutant,” “meta-human,” “Inhuman” and “magical,” we can now add “peculiar.” In MISS PEREGRINE’S HOME FOR PECULIAR CHILDREN is has the same meaning as those other words popularized by the likes of DC, Marvel and especially the HARRY POTTER franchise.

MISS PEREGRINE doesn’t have the consistent sense of wonder that HARRY managed to achieve, but it’s still pretty engaging. Asa Butterfield stars as Jake, an unhappy teen who has always loved the stories told to him by his grandfather Abe (Terence Stamp), even though Jake’s dad Franklin (Chris O’Dowd) insists they’re just metaphors. When Abe dies under strange circumstances, Jake persuades Franklin to take him to an island off the coast of Wales, to the group home where Abe spent most of his childhood.

What Jake finds is, of course, Miss Peregrine’s Home for Peculiar Children. Jake arrives at a time when the Peculiar world is under threat. It turns out that he is peculiarly equipped (in both the film’s and the general sense of the phrase) to help combat the menace.

Based on the first book in Ransom Riggs’ series of novels, MISS PEREGRINE’S HOME FOR PECULIAR CHILDREN has charm, imagination and even some decent scares. Yes, the “Hollows” do look a lot like the Pale Man from PAN’S LABYRINTH, but they are respectably eerie in this context, and the villains, led by Samuel L. Jackson, are cruel enough that we care about having them defeated. The children at the Home are differentiated well and their abilities are mostly original, with resentful Enoch (Finlay MacMillan) possessing a power that is creepy yet useful.

Eva Green as Miss Peregrine, who is essentially a headmistress witch, by now has no trouble convincing audiences she is a supernatural being of enormous passion. Butterfield is agreeable enough as the young hero and O’Dowd is credible as his well-meaning but troubled father. It’s also kind of a kick to hear Stamp speak Yiddish.

Director Tim Burton stages the set pieces well and doesn’t get in the way of Jane Goldman’s script. There’s nary a curlicue in sight, and while there is a bit of whimsy, it’s in service to plot and character. In fact, one of the biggest problems with MISS PEREGRINE’S HOME FOR PECULIAR CHILDREN is that it can’t seem to figure out how to accelerate. We understand the need to set up Jake’s background, but once he gets to the island, every time he heads from the inn, where he and his dad are lodging, to the Home, and then returns from the Home to the inn, it takes up a lot of screen time with nothing essential happening. The other problem is a time travel issue that starts off clear enough, but becomes so jumbled that by the end, we’re wondering exactly what has happened.

Mostly, though, MISS PEREGRINE’S HOME FOR PECULIAR CHILDREN is not great, but it’s good enough to tide over fantasy fans until the next truly wonderful film comes along.