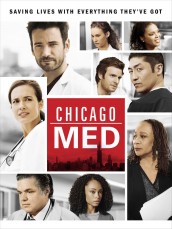 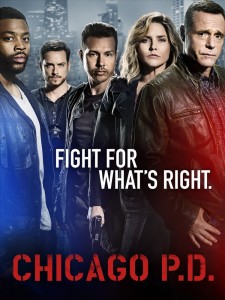 As he did with his LAW & ORDER franchise of old, executive producer/creator Dick Wolf is steadily expanding his CHICAGO empire. In 2012, CHICAGO FIRE premiered on NBC. It begins its fifth season Tuesday, October 11. Its first spinoff, CHICAGO P.D., premiered in 2014; it is now in its third season on Wednesday nights. CHICAGO MED, another spinoff about the hospital that serves the fire and police departments on the other two series, has begun its second season on Thursday nights on NBC.

Matt Olmstead, who is an executive producer on all three series, co-created CHICAGO P.D. and CHICAGO MED with Wolf, and serves as a show runner on P.D., talks about the nexus of all three series.

ASSIGNMENT X: There are these three shows, and CHICAGO JUSTICE is coming. Do you think expanding the universe helps it, or is there any fear of thinning it?

OLMSTEAD: It’s a risk worth taking. We have no idea. So we’ll find out. When we were getting P.D. geared up. Jason Beghe [who plays Detective Hank Voight] said, “I have a feeling about this that it’s going to work,” so far it’s worked. And I feel like that about MED. I really feel like it’s its own viable show, but it also works within the universe really of CHICAGO.

AX: Is there any danger between the three of you and whatever else is shooting in Chicago of running out of qualified crew people to work on all these series?

OLMSTEAD: We’ve got a great crew. The department heads we’ve got to pull out of L.A. or New York, but crew has been great. But no, we haven’t had a problem. It’s funny – Claire Simon does casting for us, and does an amazing job, but you start to see the same faces come through. The talent pool is only so big, and now you’re pulling through it on three different shows. We’re at the point now of using actors that we had on Season 1 of CHICAGO FIRE that maybe we could bring them back on P.D. They did that on LAW & ORDER many times. I think it was a three-year rule, or a four-year rule, where they had to be not on the show, so they could come back as a different character. So we’re doubling back a little bit. But so far, no, we haven’t had a problem. 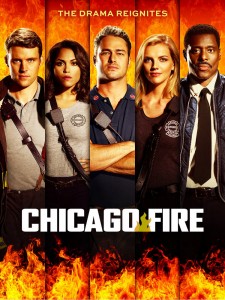 AX: Are there characters who more readily lend themselves than others to the crossover episodes?

OLMSTEAD: Only in the sense that, when you’re getting to the top of the call sheet, there’s a price point. And at a certain point, you put what you can afford, everybody’s playing ball, all the actors have been super-generous about doing a day fee or a minimum fee to come over, but you have to be mindful of how many times are you going to have that one character come through, because if they’re figuring prominently on that show, scheduling’s a hard deal. So then when you get to some of the other actors who are six, seven, eight on the calls sheet, maybe aren’t used as much on an episode of FIRE, they’re available for P.D., I have to say across the board, everybody’s super-accommodating and generous with their time. But they know that by showing up, they’re helping their own show.

AX: What is the sequence you’re proudest of pulling off?

OLMSTEAD: The MED embedded pilot was difficult to do. It took Derek Haas and Michael Brandt, who created CHICAGO FIRE and are on all three shows, it took all three of us, with Dick, to really hammer this thing out. But equally by the LAW & ORDER: SVU crossovers, which are also super-difficult to pull off, and the last one in particular I thought came across really great. I would say the SVU crossover was the most difficult and the most gratifying.

AX: It seems a little unlikely that all of these Chicago departments would consistently be involved with the same New York City police precinct. Is that kind of like the way people got around Los Angeles in improbably short amounts of time on 24, it’s just something you accept as a convention within the shows?

OLMSTEAD: There you go, exactly right. As long as you’re not doing too many, the audience is going to give you a little bit of leeway.

AX: Do you feel constrained by the procedural format of the shows, or does it give you something special?

OLMSTEAD: I don’t feel constrained, because it’s not a procedural. There are procedural elements, like in P.D., there is a standalone investigation, but we go home with all the characters on all three shows, so you are doing character work, you are able to flex all your muscles as a writer. It’s not just an investigation only, where you don’t do any character work. That’s not the show, so I feel like I spend all my energy on the shows, I flex all my muscles as a writer, I know all the other writers feel the same way. It’s been an unbelievably great experience for me.

AX: Even though P.D. is the one where you’re the show runner, you liaise between all the different shows?

OLMSTEAD: Exactly right. I mean, on [CHICAGO MED], I also help Andy out, but the smartest thing I ever did on MED was meet with him and get him to meet with Dick, and get him to be the show runner, because he’s been fantastic.

AX: And what would you most like people to know about the CHICAGO world?

OLMSTEAD: When MED first happened, and we started putting it together and Jonathan Strauss cast the show, he submitted Oliver Platt, Yaya [DaCosta], when we were first talking about it, because we had already cast Nick Gehlfuss, and we thought it was a wish list, we thought it was like pie in the sky, but we got everybody. I was like, “Holy s***, we got an amazing cast.” We have an amazing cast for the show. It’s the best – to screw it up or not in terms of writing, but we’re going to meet their quality for sure, but the cast alone I think elevates and validates the show in terms of the whole universe.

AX: Do you have any other projects going on besides the CHICAGO universe?

OLMSTEAD: Oh, Lord, no. I can’t even imagine. I’m up to my eyeballs.