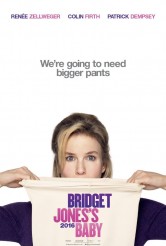 The title is self-explanatory 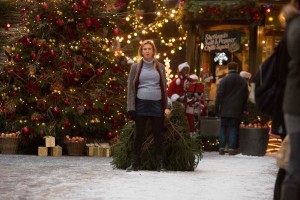 In 2001, we had BRIDGET JONES’S DIARY, based on the best-selling novel by Helen Fielding about a London “singleton” who worried incessantly about her weight and getting a boyfriend, not always in that order. In 2004, the main characters from DIARY returned in BRIDGET JONES: THE EDGE OF REASON. That film saw the title heroine, played by Renee Zellweger, apparently happily paired off with the exceptionally straight-laced barrister Mark Darcy (Colin Firth) at its end.

Now, twelve years later, we’ve got BRIDGET JONES’S BABY. Both Zellweger and Firth are back, and in screen time, it’s been over ten years since the end of the last film. Alas, Bridget and Mark are no longer together – except they keep getting thrown together again, and at last give in to one night of passion.

The good here: for fans of the earlier films, BRIDGET JONES’S BABY, retains their tone and most of their characters. There is some inspired laugh-out-loud slapstick. There are very welcome turns from supporting actor Jim Broadbent, returning as Bridget’s loving father, and from Emma Thompson, who is also credited as one of the screenwriters, as Bridget’s wise obstetrician. The ending is well- reasoned and shows rather than tells. There’s a gorgeous and inviting music festival that looks like and plays as a lot of fun.

The bad: while Dempsey is charming, Jack is set up as such a paragon that it’s hard to accept his existence, even in these relatively fairytale surroundings. For someone who is as successful as Jack is supposed to be, he’s remarkably available to Bridget at all times, with no assistants or emergency work interruptions. Then there’s Bridget herself, who remains more charming to her fellow characters than she is to most of the audience. Bridget doesn’t much help her friends out and she is perpetually upset that Mark is such a workaholic. If we’re meant to take this as a serious obstacle to the relationship, perhaps the writers could have given Bridget a career less demanding than TV news producer. Not incidentally, Bridget abuses her job in ways that are meant to be comedic but are actually kind of disturbing. Bridget’s new boss is meant to be a tyrant, but she in fact puts up with a number of incidents that would get somebody else fired.

The ugly: A character pretending to be someone he or she isn’t has been the basis for comedy since the form was invented. However, in 2016, when a heterosexual male character who’s meant to be likable pretends to be gay and overdoes it, even in a movie that has positive (albeit minor) gay characters elsewhere, that’s icky. So is Bridget (and several others) mistaking one Asian man for another.

Still, BRIDGET JONES’S BABY is pretty much in keeping with the content and tone of its predecessors. Those who liked the first two films should like this BABY; those who didn’t like the first two films probably won’t be inclined to take a look, no matter what the reviews say.