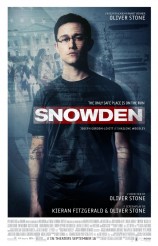 You are being watched, which means …? 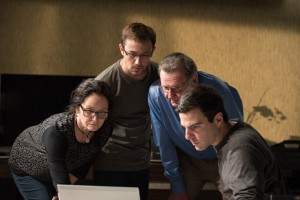 SNOWDEN, per its title, dramatizes the story of Edward Snowden, played here by Joseph Gordon-Levitt. Moving between the years 2004 and 2013, the film uses a pivotal set of interviews as a framing device. Snowden starts out as a conservative young aspiring military man who gets recruited into the NSA. Snowden’s computer skills earn him promotions, his dislike for agency tactics cause him to quit, his love of writing code brings him back into the intelligence world as a consultant. Finally, Snowden’s growing horror at the extent of U.S. domestic surveillance causes him to – spoiler alert if you’ve somehow never heard of Edward Snowden – go to the press with proof of what he knows.

SNOWDEN the movie is squarely on the side of Snowden the man, and fair enough. Director Oliver Stone and his co-screenwriter Kieran Fitzgerald, working from nonfiction books by Anatoly Kucherena and by Luke Harding, clearly share Snowden’s outrage. What’s disappointing and even kind of remarkable is that they don’t make a very credible case as to why we should be outraged, even though there are plenty of valid arguments out there.

Gordon-Levitt is terrific, as well as made to look very like the real Snowden, who shows up at the end of the film. The filmmakers do a fine job of demonstrating how Snowden is at first professionally seduced by some very bright people (Rhys Ifans is very magnetic as his government mentor) and then progressively disillusioned and even horrified by how his work is being bent to unpleasant, even murderous ends.

However, SNOWDEN isn’t great at connecting the dots between drone strikes in the Middle East and illegal government surveillance in the U.S. We get lectures, with digital charts, on how the ability of software to connect people to one another can turn anyone into a suspect, and open innocent folks up to governmental blackmail. We get a look at software experts who range from cynical to oblivious when it comes to the application of the technology they devise.

What we don’t get is something that illustrates in dramatic terms how this affects, or even could potentially affect, American citizens. The one case we’re shown where illegal use of Facebook (of all things) leads to tragedy involves foreign citizens on foreign soil. We may find the incident vile or, conversely, think there’s an argument to be made for the potential greater good. Either way, it’s not an instance of domestic spying.

SNOWDEN also devotes what feels like a good portion of its time to the relationship between the protagonist and his girlfriend Lindsay Mills, played by Shailene Woodley. Woodley is convincing, but even if it’s true to life, the movie doesn’t do much new with the whole “you’re too preoccupied with work, and not here for me enough” dynamic between them.

There is some suspense in the framing device of the journalists – Laura Poitras (played here by Melissa Leo), Glenn Greenwald (Zachary Quinto) and Ewen MacAskill (Tom Wilkinson) – who are breaking Snowden’s story to the world. Precisely because the stakes and timeline of their revelations are clear and immediate, this part of the movie occasionally threatens to overwhelm both Snowden’s narrative and the nature of the revelations.

SNOWDEN works intermittently, and it’s interesting. We can even get intellectually roused about its topics. But it never gets visceral. We’re never made to share the urgency felt by the people we’re watching, and since this seems to be the aim of the film, it’s a significant shortfall.