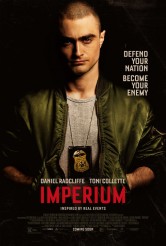 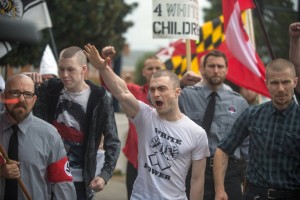 In some ways, IMPERIUM feels like a dramatized version of the monthly newsletter from the Southern Poverty Law Center. This approach has its pros and cons, with the balance tilted toward the positive. Domestic terrorism arguably doesn’t get nearly the attention it should from the news media, and consequently, dramatization of it lags behind as well.

We can hope that at least that the real FBI gives domestic terrorism slightly higher priority than that branch of law enforcement does in IMPERIUM. Here, at least the Feds’ D.C. branch seems to have exactly one agent, Angela Zamparo (the sterling Toni Collette), looking into homegrown right-wing extremists. Zamparo finds a protégé in Nate Foster (Daniel Radcliffe). Nate is a young agent who sees the value in a nuanced approach to interrogating suspects. Seeing Zamparo as something of a kindred spirit, Nate is lured by her pitch that he’ll get to do something with concrete impact. Zamparo believes that radio host Dallas Wolf (Tracy Letts) is conspiring to commit an act along the lines of the 1995 Oklahoma bombing. However, no one knows how to find the guy, so Nate agrees to go undercover in the far-right movement in the hopes of identifying and stopping Wolf.

What happens is steady, logical, sometimes surprising and, if one buys director/writer Daniel Ragussis’ relatively persuasive vision, disturbing. Working from a story by Michael German, Ragussis gives IMPERIUM a fairly naturalistic, confidential feel, even when guns come out and homemade bombs appear. The filmmaker creates a we-are-there atmosphere without resorting to over-use of Steadicam. He also makes Nate’s dangerous journey plausible, with Nate thinking on his feet to avoid being outed or forced into overt violence against civilians. There is suspense, some nicely startling wrong turns and an immersive quality that makes the movie’s world linger in the memory days after it’s over.

Ragussis has a valuable ally in Radcliffe, who endows Nate with wary intelligence and the kind of slow-burning fury that makes him credible to his new acquaintances. Radcliffe sells us on the notion that Nate’s passion for his work reads to the zealots that he meets as love for the cause.

IMPERIUM wisely never tries to sell us on the notion that Nate is in any way being seduced by the rhetoric around him. Instead, when he finds people he likes, Nate delicately sees if there’s any way he can turn them around.

Where IMPERIUM doesn’t quite work is in some of its details. For all the planning that goes into it, the timing of a key action is never explained. Likewise, some of the moments off the field – Nate in his mundane life when he’s not undercover – feel like obligatory filler rather than organic background. Finally, it’s clear what the epilogue means to do, but it’s a little on the nose.

Still, IMPERIUM mostly stays its course. As an exploration of hate in America, it is both wide-ranging and scarily believable, and as a depiction of grungy, ground-level undercover endeavors, it generally feels like the real deal.