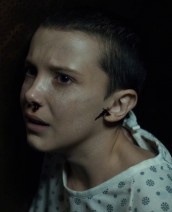 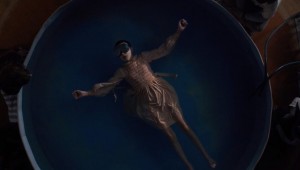 In Netflix’s new hit series STRANGER THINGS, now streaming its first season and renewed for a second, Millie Bobby Brown plays the mysterious Eleven. The show, created by the Duffer Brothers, harks back to Eighties movies like E.T. and POLTERGEIST and even FIRESTARTER.

Brown’s Eleven is a young girl who, as we see at the beginning, escapes from a sinister scientific facility. She is taken in by a trio of small-town young boys – played by Finn Wolfhard, Gaten Matarazzo and Caleb McLaughlin – who are searching for their missing friend Will (Noah Schnapp). It seems that Will’s disappearance, and the presence of a monster, may be linked to Eleven’s existence. Certainly, she exhibits some abilities, like telekinesis, that are of unknown origin.

Eleven isn’t the first otherworldly character Brown has portrayed. The twelve-year-old actress convincingly played a little girl whose body is inhabited by a centuries-old serial killer in the series INTRUDERS. Brown, born in Spain to British parents, retains her English accent in real life, even though she now lives in the U.S. and sounds entirely American as Eleven.

AX: Is fantasy/science fiction/horror a genre you particularly like, or is this just where the work is?

MILLIE BOBBY BROWN: I always find my way back to this genre. Obviously, I’m obsessed with it. The Duffers drew me into this genre, and as soon as I saw the script, I just fell in love with it. I always seem to just bump back into the genre [laughs]. I always love to do something different, but this is something amazing.

AX: How human is Eleven? Are there elements of non-human-ness to her, and if there are, how did you decide to incorporate them?

BROWN: I think for me it’s like she was non-human. I mean, she is human in her ways of trying to find her emotions, but she really can’t. So she has emotions, but she can’t figure it out yet. And that’s why she has these three boys who really show her what emotions are, and I think they really help me, especially off the set, try to help me figure that out in general [laughs], but when we are on set, that was amazing, and being in character, you guys [indicating nearby costars Matarazzo and McLaughlin] helped me so much, helped me try to figure out what my emotions were, what being sad was and what being happy was. So it was really fun.

AX: And you do a great American accent. Is that hard for you?

AX: What would you most like people to get out of STRANGER THINGS?

BROWN: Inspiration. I think that Gaten inspires so many people with his cranial dysplasia, I hope to inspire people that [a female can] have short hair and it’s okay and you look good with it. I love inspiration, and in general the love and the respect [within the STRANGER THINGS cast and crew]. I hope people enjoy it. That’s my main thing. Maybe it will remind them of the Eighties.

This interview was conducted during Netflix’s portion of the summer 2016 Television Critics Association press tour.