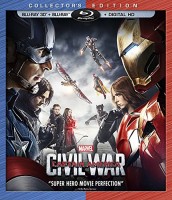 Also reviewed: THE CONJURING 2, ALL THINGS MUST PASS, BACK IN TIME and more 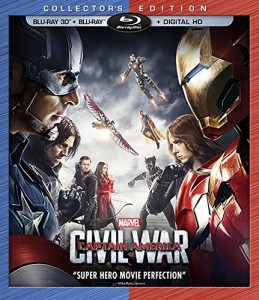 CAPTAIN AMERICA: CIVIL WAR – One of the best movies of 2016 is indeed a comic book movie. And it is a doozy in a lot of ways. First it is one of the last movies of Phase 2 in the Marvel Cinematic Universe and it does a tremendous job of wrapping up everything that has come before it. Not only is CAPTAIN AMERICA: CIVIL WAR a continuation of the previous Cap film, CAPTAIN AMERICA: THE WINTER SOLDIER, but it also serves as a sequel to AVENGERS: AGE OF ULTRON. The film straddles the line of showing the relationship between Captain America and Bucky Barnes aka The Winter Soldier and the lengths at which is goes in order to protect his friend, who has been used as a tool of terror by Hydra for decades. But also we get the idea of these super powered individuals needing a guard against much of the destruction that has come as a result of the battles they fought. Now this doesn’t even take into consideration the amazing battles that take place in this movie from the airport scene to the final battle between Iron Man and Captain America/The Winter Soldier. CIVIL WAR is a dark film. It has enough levity in it but it is a very dark comic book superhero movie the likes of which we haven’t seen from Marvel yet. But it also has this amazing twist that is teased through the film and at first we don’t know why we keep seeing it but it all makes sense in the end. Here you have this huge movie and it has this awesome twist in it, which again proves why no one does superhero movies like Marvel. Highly recommended. 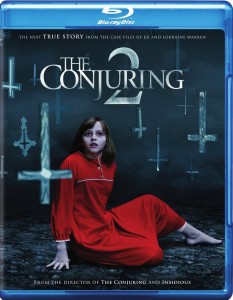 THE CONJURING 2 – One of my favorite genres in movies is horror. As such, I tend to see a lot of them. This has led me to be rather immune to shocks or jump scares. The first CONJURING accomplished this more than once. It was a nice surprise. So when I heard there was a second one coming I was pretty damn excited. THE CONJURING 2 while it doesn’t have the same scares, it is a damn good horror movie in the sense that it is different while focusing on a new haunting that threatens another unfortunate family. The really scary thing here is that much like that first movie, this is based on actual events with photos and recordings of the haunting that are real. Of course, we only see this in the end credits but to me just the fact something like this could have actually happened is crazy spooky. Once again Vera Farmiga and Patrick Wilson return as Lorraine and Ed Warren, a duo of paranormal investigators hired by the Catholic church to investigate strange events, that travel to London to help a family being plagued by an old spirit possessing the youngest child. There are some good scares here and Wilson and Farmiga are great again as you really learn to care for them and there is a pretty good twist that makes things even more tense. Well worth checking out. 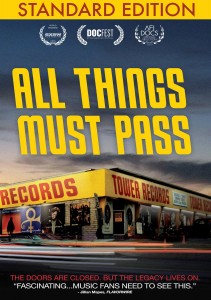 ALL THINGS MUST PASS – If you are a child of the 70s, 80s, 90s, hell even the early 00s you know what Tower Records is. You know what it meant to the music world and how cool it was to go to one of the stores and spend hours just browsing for music. ALL THINGS MUST PASS is the story of the rise and fall or Tower from its humble beginnings in Sacramento to a global phenomenon that ultimately would be part of the reason for its doom. I used to love going to Tower and just browsing. Spending hours listening to new music and music I had never heard of as well as getting rare stuff I couldn’t find elsewhere. The documentary shows how the rise in records and the style of Tower led it to expand rapidly in the 70s and 80s to become one of the more important places to be in music – Elton John, Bruce Springsteen, Dave Grohl and many others used to frequent the stores as well as major music execs. As technology evolved, Tower had no choice but to move to CDs, something that would ultimately be part of the reason for its demise. Other issues included expanding too rapidly and the rise of digital music – specifically Napster, where many customers could get music illegally for free. It is a fun doc and well worth watching especially if you have fond feelings for the record store. 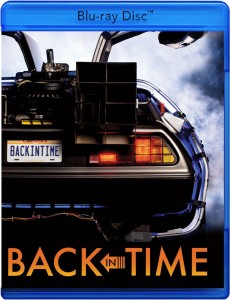 BACK IN TIME – Another good documentary out this week is BACK IN TIME, a retrospective on the cultural phenomenon that was BACK TO THE FUTURE and its lasting impact on American pop culture. The doc begins by showing numerous people that have dedicated many hours of their lives to gathering artifacts from the movie or even building many of the popular aspects of the movies themselves. It also traces the history of the making of the film and what the filmmakers had to overcome to actually get it made including first not casting Michael J. Fox in the role. Fox is interviewed along with many of the other actors and crew and it really sheds some light on not just how the film was greenlighted but the impact the trilogy made on filmmaking and the numerous lives it influenced. While the historical movie making interviews are interesting, the fans of the movies and their gatherings is much more interesting and how they live and breathe all aspects of the films. 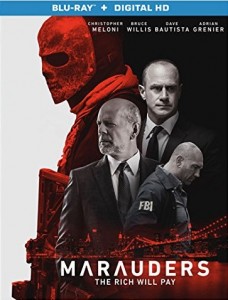 MARAUDERS – Someone tell Bruce Willis to take a step back and stop making a straight-to-video (Blu-ray and DVD) flick every month. Because right now he’s cranking them out like he has received a Walter White-type decree in life. Now, Bruce Willis of the years gone by was someone that had a scale of acting where he would actually try to where he would just play himself as a jerk. The scale is broken and he is only playing himself in virtually every straight-to-video flick he’s been in over the past few years. It is interesting for an aging actor on where to turn when those A-list roles dry up and we are seeing more and more those that were once at the top of the game are now regulated to Netflix or the Blu-ray doldrums of mediocre action flicks. As far as MARAUDERS goes, it is actually pretty good because Willis isn’t the main star but secondary to LAW AND ORDER alum Christopher Meloni along with GUARDIANS OF THE GALAXY star Dave Bautista and ENTOURAGE lead Adrian Greenier. So not a bad line up of actors and the action and storyline are good enough to keep your interest. Greenier specifically does a good job and showing he can move beyond playing a one-type character which maybe bodes well for his career. So if you want a good action flick, this is one to check out despite having a washed-up Willis. 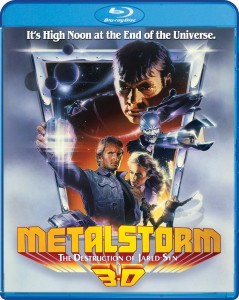 METALSTORM: THE DESTRUCTION OF JARED-SYN – This may be the most 80s movie you ever see from the convoluted title, to the overly dramatic music throughout, to the bad hairstyles, to the not-so science fiction set pieces. The only thing missing is the 80s dialog. METALSTORM is one of those forgotten MAD MAX clones complete with apocalyptic driving and marauders with a protagonist that has dead eyes and probably never did anything after this. METALSTORM is a mess and has way too much going on, which is actually surprising because the film barely makes it to 90 minutes and that is with an extremely long opening and credit roll.  Here’s some of the joys to look forward to: