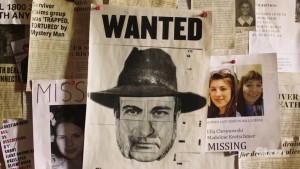 When writer/director Greg McLean’s feature film WOLF CREEK premiered in 2005, it was too brutal even for some horror fans. McLean’s tale, based on some actual incidents, centers of on Mick Taylor (John Jarratt), a sadistic serial killer roaming the Australian Outback, beyond the reach of law enforcement. WOLF CREEK 2 debuted in 2013, with Mick once again torturing trapped tourists; one of Mick’s victims survives but is blamed for the killings and is confined to a mental hospital.

Now Pop TV is bringing a WOLF CREEK six-part miniseries to television, starting Friday, October 14. McLean is the executive producer and directed the pilot, which introduces us to Eve Thorogood (Lucy Fry). Eve is a nineteen-year-old from Omaha, Nebraska, visiting Australia with her family. When Mick massacres her parents and brother, Eve is determined to get revenge and goes searching for the human monster.

McLean, whose work also includes the crocodile horror thriller ROGUE and the new supernatural horror film IN DARKNESS, talks about adapting the WOLF CREEK premise into a television arc.

GREG McLEAN: No, I had actually wanted to do a TV series, and I was pitching it around different places, and then I went to Screen Time, which is the company that I co-produce the show with, and we tried to get it together one year, and it didn’t really work out, and then we came back together the next year, and at that time, we had the right combination of elements. I didn’t quite know what it was at the time, but I always thought there was the possibility for a great TV show.

AX: In the first episode, it’s clear that Mick Taylor is a murderer, but unclear if he’s also a torturer. Does Pop TV allow him to have those aspects to his character?

McLEAN: No, it’s all there. It goes there. And also, in Australia, we have no barriers at all. They’re always saying, “How far can we go?” They said, “Go as far as you want.”

AX: You have a sequence where a little boy appears to be in the water with a large and threatening crocodile. How did you do that?

AX: Why did you decide that Eve came specifically from Omaha?

McLEAN: The writers and I came with that. We wanted to make her very Midwestern, we wanted to make her like the salt of the earth of the States, rather than being coastal. I don’t know, is that a good idea? [laughs] I think it was about trying to find someone from Middle America as someone who would be outdoorsy, and someone who had experience with the outdoors a little bit, that would justify how she could survive in the environment of the Outback.

AX: Is the TV WOLF CREEK going to turn into a sort of Clint Eastwood revenge Western?

McLEAN: Yes, very much so. A lot of my inspirations for this were Westerns. I love Westerns. My two favorite things are Westerns and Hitchcock movies. So a suspense thriller with a Western element – and the Outback really is like the Wild West. You’ve got this environment where good guys and bad guys can exist and that kind of drama can play out. John [Jarratt] describes it as like UNFORGIVEN, with a young woman as the Clint Eastwood character, which I think is a great description.

AX: Where did you shoot the series?

McLEAN: We shot it all in a place called Hawker and Lorne, and it’s in the Outback, South Australia. We based the location out of there. We did a bit of stuff in the studio as well, but we went to this amazing location out there, which is where we shot the first two movies. So we went to the same places we shot the first two movies at, because we are committed to making it as big and cinematic at the movies.

AX: How did you find your Mick Taylor, John Jarratt, way back when?

McLEAN: I went to theatre school as a director, and when I was there, I saw John in a production of a play where he was playing a very racist cop, a terrible cop. And John was known in Australia before that as a Tim Allen HOME IMPROVEMENT kind of guy. The perception in the Australian media was that kind of character. I saw him in this play, SONG FOR A BAD GUY. And I thought, “This guy’s got a dark side as an actor I could explore.” And so I thought of the character – I thought, “Who could possibly play it? If we cast someone who’s like that, who one perceives as being a nice, funny guy, and then cast him as a serial killer, no one will ever see it coming and it’ll be a huge surprise.” So that was how we cast him.

AX: At the end of the second WOLF CREEK film, you’ve got somebody else locked up for the crimes. Is the TV series ever going to deal with that, or are the films in a separate universe?

McLEAN: The series takes place after the second film in the timeline, so they do refer to that case, they’re aware of what happened with that guy, but as far as they know, this guy went crazy and it happened in the Outback, but no one believes what he said.

AX: So the police don’t necessarily think he had anything to do with these new crimes, they just think he’s generally insane?

McLEAN: We certainly have to work harder on the cliffhanger aspect of each episode being its own self-contained [story], keeping the suspense of that particular piece of story, because that story goes over the whole time, you’ve got to work out what the particular suspense needs to be. So it’s different structurally. I think the same kind of [scare] gags apply.

AX: And in terms of the WOLF CREEK ethos, as far as the super-graphic violence and the drawn-out violence, apart from it being horror in the literal sense of, “Yes, this is horrific …”, Is there something you’re trying to say with that, or is that simply, “Welcome to My Nightmare”?

McLEAN: Well, interestingly, it kind of has to do with the landscape itself, and the inspiration for the whole series came from a series of true murders that happened in the Australian Outback. To me, the most intriguing thing about that whole thing was, one, a character who can operate completely without consequence in a place so big, they can never be caught, because they can keep on hiding. That’s a fascinating idea. And then counterpointing that with this incredible [natural landscape] beauty. So the idea of having this terrifying human predator in this environment that was really beautiful and at the same time really dangerous, that was just a compelling mix of things to put together. In terms of the violence, the randomness of the violence to me is what to me is really scary, in the way that in the true stories, the most terrifying thing was the notion of that someone can just be traveling on this road, someone passes that road, and their paths cross. Thematically, it’s the notion of how the slightest thing can twist your entire life around. If you turn left, you can meet this guy; if you turn right, you can meet that person. That to me is one of the most terrifying ideas out there. So I think that’s something worth exploring. We do that a little bit in the show.

One of the other key reasons why [WOLF CREEK is] one of the scariest films around, the idea of someone who is that kind of psychopath, who captures someone and keeps them alive. That to me, and I think to other people, is the most terrifying thing we can possibly imagine. And I think that’s why the first film had such an impact. There have been cases where that has been true. There is nothing scarier than that concept, and I think people generally are fascinated by evil characters, fascinated by the psychology of evil characters, which is why there are so many true crime shows. So there’s a true crime aspect to the whole WOLF CREEK thing. It’s not just a horror film, it’s about trying to explore the mind of a psychopath. I think the way that you show he does these kinds of things, you’re repulsed but intrigued, like, how could a human being do that? So I think we’re compelled by the nature of pure evil, and he’s definitely a character that is pure evil.

This interview was conducted during Pop TV’s portion of the summer 2016 Television Critics Association press tour at the Beverly Hilton Hotel.