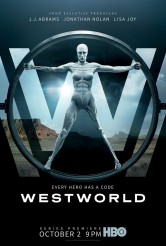 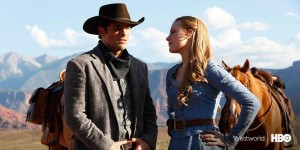 The 1973 cult hit WESTWORLD, based on Michael Crichton’s novel, centers around an immersive amusement park where customers can play at being gunslingers among lifelike androids. Naturally, something goes wrong.

Now WESTWORLD has been reinvented by Jonathan Nolan and Lisa Joy Nolan for HBO, which is now running the first season on Sunday nights. The new WESTWORLD still takes place in a very realistic recreated Old West, where profoundly humanlike androids do whatever the guests want. There are indeed glitches. But this WESTWORLD, instead of jumping into the “technology gone wrong, must escape” scenario, instead asks what all of the artificial intelligence means for its creators, the paying visitors, and the androids themselves. The cast includes Anthony Hopkins, Jeffrey Wright, Evan Rachel Wood, Thandie Newton, James Marsden and Ed Harris.

Nolan, sometimes called “Jonah” Nolan, co-wrote the screenplays for THE DARK KNIGHT, THE DARK KNIGHT RISES and INTERSTELLAR with his brother, director Christopher Nolan. Additionally, Nolan created and executive produced PERSON OF INTEREST, which ran for five seasons on CBS and also dealt with artificial intelligence, although in a very different way.

First at a Q&A session arranged by HBO, and afterward at a discussion with a few reporters, Nolan talks about his new exploration of machine consciousness.

ASSIGNMENT X: How did this project come about?

JONATHAN NOLAN: It starts with J.J. Abrams, who I’ve been collaborating with going on six years now. He is a fantastic partner. J.J. actually sat down with Michael Crichton, he was telling me, I think two decades ago. Crichton wanted to talk to him about remaking the original film, and J.J. couldn’t crack it at that point. And in fact, neither could the rest of the town. Yul Brynner’s performance, in particular, is so iconic with that role [as the android gunslinger].

Fast forward two decades later. It occurs to J.J. that it’s not a movie, it’s a series, and a key aspect of that is this idea that you take the narrative and you invert it, and you make it about the hosts [the androids]. J.J. reached out to Lisa and myself. And for us, it felt like an opportunity to play with all the questions we were most excited about, what’s happening right now with artificial intelligence. This is a show that has so many fascinating things that we love to dive into, so we couldn’t possibly turn it down.

AX: You spent five years dealing with A.I. on PERSON OF INTEREST …

NOLAN: I think I found my subject.

AX: Did you come to any conclusions about artificial intelligence while doing PERSON OF INTEREST that have been useful in WESTWORLD?

NOLAN: It’s funny, because it’s really looking at the subject from a different perspective. PERSON OF INTEREST was relentlessly non-anthropomorphic A.I. was really the godhead, it was A.I. as a pure intelligence, not tethered to the mortal coil, an A.I. that was developed in secret. With WESTWORLD, you have really the opposite. You have A.I. that, if you consider the consciousness aspect of it, it’s almost an accident that these creatures – they’ve been programmed merely to be as lifelike as necessary for their job, and their job is to satisfy, as Lisa said, our most noble or most base desires. So they’re not supposed to be smarter than us. That’s the last thing [their makers] want.

NOLAN: Well, the guest experience is the third point of view of the show, but it’s very much unlike the original film. We really wanted to start with the hosts, start with their limited understanding of what this world is. But there is that great point of entry. You want to know, how does this place work? As Lisa said earlier, the show is really an examination of human nature, from two different directions. From the perspective of synthetic humans, or synthetic beings, who have been coded to resemble human nature as closely as possible, and who are beginning the question, in the first season, just how worthy a model that is to follow. Every perspective of human beings, and this is the delicious part of the premise, who have been invited or made their way into a space in which they’ve been told that they have free rein. They can take their id on vacation. They can indulge in any whim, no matter how noble or dark that they want, and apparently without consequence. And so that’s a fascinating premise as well. You know, who are we when the lights are off? Who are we when we don’t think anyone’s keeping score? And then in between these worlds [of the synthetic hosts and the human guests], you have the programmers, writers, technicians, the Promethean characters who are responsible for mediating those two worlds.

AX: It seems like Ed Harris’ Man in Black gunslinger/marauder character is a guest who is indulging real darkness in himself …

NOLAN: Ed’s character features as the “ne plus ultra” guest. This is an expert-level player, someone who has been coming to the park, as he says in the second episode, for thirty years. He knows everything about [the park].

When Crichton wrote the original film, the state of the videogame business was Pong. In the forty years since then, that entire industry has grown up and evolved into this monster that’s bigger than the film business, bigger than the TV business. So our narrative had to account for that more sophisticated understanding that we have of gaming. We call them “guests,” but there is also a gaming aspect to what they do in the park. It is not just a leisurely resort. They’re here to engage in the narratives, and the narratives are increasingly sophisticated.

NOLAN: It’s not the guns. It’s the bullets. We thought a lot about this. In the original film, the guns won’t operate guest on guest. But we felt like the guests would want to have a more visceral experience here. So when they’re shot and it has an impact, they’re called “simunitions.” The U.S. military trains with rounds like the ones we’re talking about. There’s a bit of an impact, a bit of a sting. So it’s not entirely consequence-free for the guests.

AX: What kind of injury-waiver forms do the guests have to sign in order to enter the park?

NOLAN: You would imagine there’s a fair amount of injury and risk involved in going to Westworld. Part of what the hosts have been designed to do, we have a feature in the program we call the Good Samaritan reflex or function. The park is populated with hosts, and part of their responsibility, part of their subconscious programming, is to try to protect the guests in whatever capacity they can. So if you’ve got a drunken guest who’s careening toward a cliff edge, they’re more likely than not to have a host nearby who, without breaking that narrative, is going to find a way to gently steer them back. They’re cannon fodder on one hand, but they’re also kind of the all-purpose minders of this place.

AX: Have you given any thought of how much it costs the guests financially to go to Westworld?

NOLAN: We did. We came up with an early estimate number, which I hate to really relate. One of the ideas that’s gently touched on – in our world, this park has been active for more than thirty years. You drive around L.A. and you see the “Disney 60” signs. And we really took Disneyland itself – obviously, it’s a very, very different experience, but the idea of a fantasy world that you created was compelling enough for the last generation. People would take their grandkids and regale them with the stories of when they were there originally, sixty years ago. So this fantasy space is powerful enough and lasting enough to become an institution. We imagine in our show that Westworld has become an institution, a place that people can come to and they bring their kids.

AX: You shot on some very iconic Western locations …

NOLAN: Death Valley in Utah. I was born in this country [the U.S.], but I lived the first years of my life in England, which does not have any places that look like Utah or Colorado. So every chance I got, I would take a road trip. For me, America is incredibly beautiful – so many places to look at. The place that I was always drawn back to was southern Utah. It has these landscapes that don’t look like anywhere else on the face of the planet. So when we talked about doing a Western, we went to that classic, iconic sense of the John Ford Western, the Western with that geography that is exquisitely, exclusively American. It turns out that John Ford had obviously made Monument Valley famous with his first films. His last four films were shot in Castle Valley in Moab, which is where we went back to for WESTWORLD. It’s an incredibly beautiful place.

AX: Your player piano in the bar has contemporary songs. Can you name a few that might be heard?

NOLAN: It’s one of the joys of what I get to do . With me, it’s always a combination of something old, something new. Once we clear the song, [we do an] arrangement of the song, and then play it on the piano. And then we have a little company that we found in Southern California, and they can create the paper reels that we then thread into [the player piano]. We have several actual player pianos, they’ve all been carefully restored, so these companies can create the reel with that piece of contemporary music on it. There’s actually a piece of Radiohead in the second episode as well. So we get our Radiohead song, we create our reel, and we put it through. It’s really a lot of fun.

This interview was conducted during HBO’s portion of the summer 2016 Television Critics Association press tour at the Beverly Hilton Hotel.