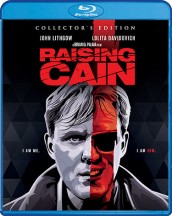 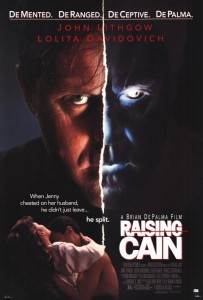 I was never a huge fan of Brian De Palma’s 1992 thriller RAISING CAIN. Bringing the director back to his early thriller roots (like DRESSED TO KILL and BLOW OUT) that were drenched deeply in Alfred Hitchcock suspense and callbacks, CAIN came off as a trainwreck of a movie mixing tones and themes but never truly satisfying. Was it supposed to be a comedy? A thriller? A black comedy? A parody of other De Palma films? While there was an amazing performance by John Lithgow at the center, the different characters he played did not quite feel in synch with the rest of the movie.

Of course, there was a reason for all of this. De Palma at the time, coming off of the disastrous big budget BONFIRE OF THE VANITIES adaptation was looking to reboot his career and needed a hit and he didn’t trust his original instincts as he was editing the film. So instead of following the structure of the script,  he instead jumbled scenes around so the movie began with a bang right from the start.

A few years ago a huge De Palma superfan Peet Gelderblom got a hold of the original RAISING CAIN script and decided to recut the film to conform to De Palma’s original vision. When the Blu-ray was announced, De Palma said he approved the fan redit as an official “Director’s Cut” and encouraged Shout! Factory to include it on the new Blu-ray release in addition to the original theatrical verison.

Now we get to see the finished result and I have to say, it’s way better than the original. And what’s more amazing is there’s no additional footage added to this cut. It’s just a simple reorganization. It shows you how simple editing choices can result in HUGE tonal shifts. Granted, most of the rejiggering is in the first half with the latter half mostly unchanged, but it still provides a much more satisfying experience in this new form.

Whereas the original began with Lithgow’s Dr. Nix character doing some pretty horrible things and then revealing multiple personalities egging him on to facilitate these horrible crimes, this new version actually focuses on his wife Jenny (Lolita Davidovich). We see Nix as a peripheral character at first and how her unhappiness in her marriage leads her into the arms of a former beau (Steven Bauer). The movie is more naturalistic at first and Nix’s character is quite normal, almost too square. Then, beat by beat, the layers of who Nix is and his problems start to manifest. It’s much more organic and far more interesting than in the original cut. And with the film  bookended with Jenny, you realize the film truly is about her and her daughter and not necessarily Nix.

Without giving too much away, what we learn about Nix is that his father’s domineering behavior and experiments created split personalities in him, all trying to come to the forefront. Nix grapples with this throughout the movie as he successfully manages to keep the police off his trail while putting the suspicion on everyone else.

There’s some great cat and mouse moments in the film, and some amazing De Palma (channeling Hitchcock) moments. However, an attempt to be super clever at the end with a sort of low rent version of his Odessa Steps sequence in THE UNTOUCHABLES (this time set in an apartment complex) doesn’t work as well as it should. It comes off stilted and forced, but I would argue De Palma is actually fully aware of what he’s doing and that he’s parodying the excesses and techniques of his past films.

The special features are solid, as is expected with Shout! including new interviews with Lithgow, Bauer, Gregg Henry and more. There’s also a featurette on the evolution of this “director’s cut” of Cain.

The other great part of this set is you do get both versions of the film and can judge for yourself which is better. However, I strongly urge anyone who hasn’t seen this film in a long time to watch the Director’s cut first, then scroll through the Theatrical version.

Shout! Factory continues to offer film fans amazing options when it comes to their releases. Instead of merely being content putting out special features and a remaster, they offer bonuses many of us would have never thought existed.This RAISING CAIN bonus version is great and I can’t wait to see William Friedkin’s original version of THE EXORCIST III due out later this month.