Milo Ventimiglia Interview This Is Us Gilmore Girls revival

The actor chats about his new NBC series and more 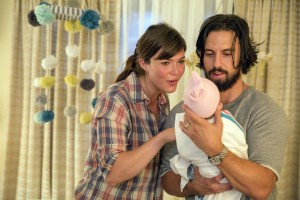 NBC’s hour-long Tuesday-night series THIS IS US is one of the best-received new shows of the fall. Created by Dan Fogelman, THIS IS US explores the lives of four people who share the same birthday and their families, in the Eighties and in the present.

Milo Ventimiglia plays Jack, who is married to Rebecca (Mandy Moore). They are the birth parents of Kate (Chrissie Metz plays her as an adult) and Kevin (played as an adult by Justin Hartley) and adoptive parents of Randall (Sterling K. Brown portrays the grown version). Ventimiglia also reprises his role as Jess Mariano in the Netflix miniseries THE GILMORE GIRLS: A YEAR IN THE LIFE, which premieres in November.

ASSIGNMENT X: How did you get involved with THIS IS US?

MILO VENTIMIGLIA: You know what? This was off-cycle. It was cast in October, and I read it in a pile of other scripts that got sent to me, and I thought it was beautiful, and I read it through twice. I had friends in common with Dan Fogelman and had friends in common with [executive producers/pilot directors] John Requa and Glenn Ficarra, and I was like, “You know what? I just want to meet these guys. I want to go and sit in a room and hang out with them, aside from this beautiful piece of material that I’ve read.” It was a combination of things. It wasn’t just a script, and going in and trying to be impressionable as an actor, or show them that I could play the character. It was I legitimately wanted to meet Dan and John and Glenn, because we had friends in common. And honestly, out of that meeting came them saying, “You’re our Jack.” And I went, “Great.”

AX: In the opening episode, there are several twists, when we discover how all the characters are connected and that the show is unfolding in two different eras. Are there any concerns about being able to sustain that feeling?

VENTIMIGLIA: Here’s the thing that I say about that. How can you sustain life? Fogelman is magic, and I think the other scripts of his that I’ve read for this show specifically are as beautiful as the pilot script. And he said it in a meeting [regarding the stillbirth of a child], “You can’t kill a baby every week.” But I think the idea that you can have these impactful moments that are as heightened as the loss of a child – it’s life. You have to be able to sustain life. So moments are going to be lighter, but moments are also going to be heavier. I think just the understanding that life goes in a million different directions, and hopefully, if you find excitement by what these characters are experiencing and what they’re living through, and you’re impacted by them as human beings, then that’s the sustainability of the show. That’s the thing, I think, to match that, week in and week out. I have friends that work in network television who say, “Look, your most important episode isn’t your pilot, it isn’t your midseason finale or your season finale, it’s Episode Sixteen, randomly in the middle. If you can make a great Episode Sixteen, randomly in the middle, you’re going to be successful.” And I think, given what Dan has set up with the characters and what their lives are like, it’s going to be interesting to see how everyone navigates life.

AX: A lot of the material you’ve done has been either genre or crime drama …

VENTIMIGLIA: How nice is this? [With] this show, I don’t think I was seeking something outside of the world I’d always played in so much as I’m ruled by characters. If it’s a great character, I’m invested. It doesn’t matter what the genre, what the storyline, anything. For me, it’s character, and luckily, I got pulled into a really amazingly talented group of people that are storytellers, and are wanting to take a journey.

VENTIMIGLIA: You know what? The older I get, the easier it is to just be present in the moment, and understand what a man is going through. Given the loss of a child or the birth of a child or anything like that, I think it’s just I’m more moved by life, the older I get, so it’s easier to connect to the characters that I play. Week in and week out, it’s going to change, though. The spirit of the character Jack – he’s a lot lighter than I’ve played in the past, but it’s the challenge of learning your lines and existing as the character from “Action” to “Cut.”

AX: You have a moustache right now …

VENTIMIGLIA: We’re jumping around a lot [through the years on the show]. I hope everyone can give the audience that real, true experience. But Mandy and I, we definitely jump decades, and I think trying to find a base look, so that I can go back to the Eighties, I can jump to the Nineties, it was like, “All right, Milo, you’re living in a moustache for a little while.” Which I’m perfectly fine with.

AX: Is this your first time playing a dad, in this show?

VENTIMIGLIA: No, no. In THE WHISPERS, I played a father, with an amazingly talented actor, Kyle Breitkopf. I’ve played a dad a lot, so it’s nice again to be in that world. [Jack is] a character that’s got a lot going on. He’s a dad, he’s got to look out for his family, but at the same time, he has to look out and nurture the relationship with his wife, because he’s now tested.

AX: Do you find THIS IS US a difficult show to describe?

VENTIMIGLIA: I tell people, “It’s the hardest thing to explain, but it’s the easiest thing to understand.” And all anybody really needs to know is, the struggles of life, the joy of life, the excitement and the heartbreak of life is something we can all connect to. And I like to hope that the inclusivity of the show is something that audiences will relate to. They’ll be able to relate to the struggle of Jack and Rebecca, or Justin’s character Kevin, or Sterling’s character Randall, or Chris’ character Kate, understand what these men and women are going through. I love how inclusive the story is of a broad range of people, and I think that’s what’s going to make it special, that’s what’s going to make it impactful to a broader audience.

AX: Can you talk at all about returning to the role of Jess in the GILMORE GIRLS revival miniseries?

VENTIMIGLIA: It was a blast. It was a lot of fun. I’ve said it for a very long time – [executive producer] Dan [Palladino] and [creator/executive producer] Amy [Sherman-Palladino], I’ve stayed very, very close to them over the years, and for them to call me and say that they’re doing this, putting this together, I was absolutely going to show up. Yeah, very excited. It was putting on a suit that you remember from the past, a jacket from the past that still fits well. Everything was classic.

VENTIMIGLIA: I have a show that I produced, called RELATIONSHIP STATUS that premiered on Go90 two months ago, thirty different characters in eleven different stories about dating in the digital age, all on a mobile platform, Go90.

MAD TOWN was a movie that I acted in, a little independent film about a guy who has a very difficult life, and seeks solace through some stand-up comedy. [Costar] Bonita Friedericy was great, and John Billingsley was amazing.

AX: What would you most like people to know about THIS IS US?

VENTIMIGLIA: Oh, man. I just want people to watch it and enjoy it. It’s such a great, beautiful show that I’m lucky to be a part of, and I think people are going to fall in love with it.

Article Source: Assignment X
Article: Interview with actor Milo Ventimiglia on THIS IS US and GILMORE GIRLS revival