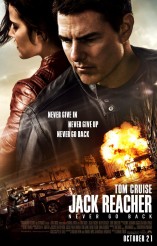 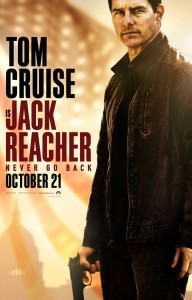 JACK REACHER: NEVER GO BACK makes this is a good week for movie franchises with second installments that improve upon their originals. Like OUIJA: ORIGIN OF EVIL, NEVER GO BACK fixes issues that went wrong the first time to deliver solid entertainment within its genre, in this case, the action thriller.

As with 2012’s JACK REACHER, JACK REACHER: NEVER GO BACK finds Tom Cruise as a former military police officer, now a civilian with no fixed address. From time to time, he does good when and where he can. This currently includes tipping off current military police Major Susan Turner (Cobie Smulders) when soldiers are up to no good, like drug smuggling or human trafficking. When Turner is framed for treason, Jack is determined to help her. He also winds up protecting fifteen-year-old Sam (Janika Yerosh), who may or may not be the child Jack never knew he had from a long-ago fling.

Director Edward Zwick, who wrote the screenplay with usual writing partner Marshall Herskovitz, plus Richard Wenk, from Lee Child’s novel, has a lot of fun with both the fights and the locations. It’s hard to get much more atmospheric than New Orleans at Halloween. At the same time, Jack doesn’t hog all the heroism. Smulders, who was in THE AVENGERS as Maria Hill but saw relatively little combat there, gets to show off her chops – and kicks, and punches, and chokeholds – convincingly as the very able Turner. Even Sam turns out to be somewhat handy, despite doing the occasional very dumb thing needed to keep the jeopardy flowing.

Jack also faces some worthy opponents. It’s never made clear exactly why the assassin played by Patrick Heusinger is so bent on demoralizing Jack, but he’s sufficiently odious for us to root for his comeuppance. Robert Knepper exudes slyness as a general with an agenda, Aldis Hodge adds energy as an MP on Jack and Turner’s trail and Ninja J. Devoe makes a pleasingly strong impression as a helpful underling.

Apart from suggesting that private contractors can get away with murder (literally and figuratively) in a war zone, JACK REACHER: NEVER GO BACK doesn’t have anything big on its mind. The filmmakers and Cruise handle Jack’s feelings about potential fatherhood deftly, enough to create a bit of emotional warmth, not so much as to drown things in sentiment. The investigative part of the mystery keeps our protagonists on the move, but we’re not set up to expect any major twists, nor do we get any. The storyline primarily exists to keep everybody moving and occasionally have some impressive hand-to-hand combat and stunts. The real display of skill here is in maintaining a tone that allows for some jokes while letting us care somewhat about the outcome.