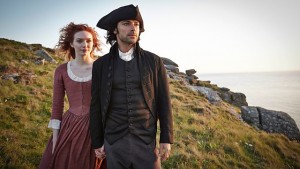 POLDARK is back for its second season (and renewed for a third) Sunday nights on PBS. In period series based on Winston Graham’s novels, Ross Poldark (Aidan Turner) has returned to his home in a village in Cornwall after the American Revolutionary War. Eleanor Tomlinson plays Demelza, the peasant girl that Poldark rescued and eventually married in Season 1.

In Season 2, Demelza has a firmer grip on her new life as a member of the landed gentry, but she still has to deal with Ross pining for his now-married former fiancée Elizabeth (Heida Reed). Tomlinson talks about all that Demelza is doing this year.

ASSIGNMENT X: Does Demelza’s sphere of activity increase in Season 2?

ELEANOR TOMLINSON: Yeah, it does. I always thought that she had quite a lot of activity. She was very much at the heart of the story before, and I think still in Season 2, she very much is. Debbie Horsfield, our writer, she’s worked really hard to keep Demelza at the heart of it, because naturally, the books tend to drift off and introduce new characters, whereas in our series, we stay very much front and center.

AX: Have you had any input into the character as the show has gone on, where you said, “I’d like Demelza to go a little more this way and a little less that way”?

TOMLINSON: Not so much, because they’re following the books, but I think Debbie has such a great understanding of the characters that what she’s done is, she’s made Demelza much punchier than she is in the books. [This] is great for me, because she tends to just fade slightly into the background in the books, but Debbie’s really taken a lot of effort to make sure there are still really good storylines for me. It’s good.

AX: Did you learn anything doing Season 1 that’s helped you in Season 2?

TOMLINSON: I think it has to do with the pressure of an incredibly long shooting schedule and staying across all of the scripts, and just making sure that I know my character and sticking to my guns. Working with the directors is so important. It’s a very creative process. I think everyone has an input, but I know the character so well now, I know her like the back of my hand, and I really have to stick to my guns if I feel something about it.

AX: Demelza and Ross lost a child. When you’re playing something like grief over the death of a child, do you have to calibrate, “Okay, how do I make this realistic without disappearing into the floor?”

TOMLINSON: Of course. Absolutely. It’s a very sensitive subject to handle, because obviously, some viewers watching it will have had that terrible, traumatic experience. And it’s not something that I would wish on anybody. But I think actually, just the subject matter is just enough to think about what someone must have gone through who has experienced that. It’s not hard to summon an emotion for that. It is heartbreaking. And you get so involved in the characters when you’re creating them that you feel their pain, you really do.

AX: Seeing Ross flirting with Elizabeth, do you think Demelza feels she’s not good enough for him for a moment, or does she just want to smack him over the head?

TOMLINSON: I think that she feels, not that she’s not good enough for him, it’s more just the fact that she is annoyed by this effect that Elizabeth has on him, and has always had. He cannot seem to get her out of his head. That’s never nice for someone who is in a relationship, if they’re constantly wandering elsewhere. [Demelza] adores Ross and she thinks that they have something great, but what she realizes and Ross doesn’t is that the relationship with Elizabeth would never work. But it’s still painful for her.

AX: So does she think, “All right, he’s going to make a jerk of himself, and I’ll just wait for him to get over it”?

TOMLINSON: No, I don’t think so. I think she’s really upset. I think she’s very angry with him, that he is going to make a jerk of himself, as you say, but I think there’s nothing she can do. She just has to bide her time and take care of their son, and then deal with the consequences when he gets back.

AX: And do you have time to do any other work during the hiatus?

TOMLINSON: Yeah. I try and do other projects, just so that I’ve done something different. I have a film called LOVING VINCENT coming out. I have another film called ALLEYCATS coming out. So I’ve managed to fit in quite a few things. Between [Seasons] 1and 2, I did a computer game – I play a kind of army leader, it’s all set in space, very cool, they haven’t titled it yet – and I did an audio book, so just lots of different things, really, it’s just fun.

AX: Did you do motion capture for the video game?

AX: And what would you most like people to know about POLDARK Season 2?

This interview was conducted during PBS’ portion of the summer 2016 Television Critics Association press tour at the Beverly Hilton Hotel.