The actor talks about the new season of the period drama 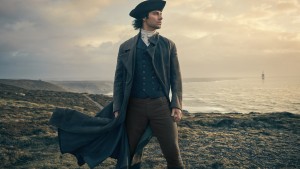 Aidan Turner returns as the heroic eighteenth-century hero Ross Poldark in POLDARK, which returns to PBS for its second season on Sunday, September 25. Poldark loves his wife Demelza, played by Eleanor Tomlinson, but still pines for his now-married former fiancée Elizabeth, played by Heida Reid. Poldark is also still battling for the family properties and to prevent the wealthy locals from taking advantage of the less fortunate.

POLDARK is extremely popular in the U.K., where filming on Season 3 is already underway. Turner has had long runs as a vampire on three seasons of the U.K. version of BEING HUMAN, a dwarf in the big-screen HOBBIT films and played a werewolf in the contemporary fantasy THE MORTAL INSTRUMENTS. The Dublin, Ireland native talks about having a long run playing an ordinary mortal.

ASSIGNMENT X: After having some experience playing contemporary nonhumans, and an historical fantasy nonhuman, and a historical human in POLDARK, do you have a preference between the three?

AIDAN TURNER: [laughs] It’s always been fun. Being in Middle-Earth for a couple of years was a lot of fun, playing a vampire and a werewolf was a lot of fun, and being in their universe. I like this world I’m in now. There is something quite refreshing about being on Planet Earth for real, and not living to a crazy age of two thousand or transforming into a monster at midnight. It’s quite refreshing to, as a character, to get up in the morning, jump on a horse, have a whiskey and go to bed. I connect with that sort of person a bit more, I think.

AX: Do you want to play a contemporary character that doesn’t grow hair or fangs?

TURNER: [laughs] I don’t have a preference. I just follow the good work and the good writing, and that’s what it’s all about with me. If I get a script in, and it’s a supernatural script, or a sci-fi script, or whatever it is, once it’s good writing and I connect with it and I connect with the ideas, and maybe respond to the filmmakers, that’s what it’s all about. So I don’t tackle my work that way. I don’t think, “I want to play this type of person,” or whatever it might be. I just go for the good stuff if I can.

AX: Has playing Poldark opened any doors for you in terms of work?

TURNER: I suppose. It’s hard to know. I guess it might be a little easier. Scripts come in, maybe more of them come in, and when you’re on TV, getting the ratings we’re getting in the U.K., we’re all quite popular back home. So yeah, it might be a little bit easier these days. But work is still work. You’re still an actor, you still audition.

AX: Do you get to do many of your own stunts on POLDARK?

TURNER: Well, on POLDARK, with the horse-riding thing, I try to do absolutely as much as I can, as much as I’m allowed to do. Sword-fighting is something that I quite like. I did a lot of that in New Zealand, and combat is what I like. I’m into MMA fighting, and I’m a big fan, so any sort of unarmed combat I’m into. And armed. I love it all. All the stunts. I’m mad for it.

TURNER: It’s slightly different ways. Heida quite likes rehearsal, she wants to rehearsal a lot. Eleanor doesn’t – Eleanor kind of kicks it into gear. We shoot fast, we don’t really rehearse, we just run the lines and do it. With Heida, yeah, I suppose it’s just a different method. I enjoy both – I’m a big fan of rehearsal, I want to get it right and know where we’re at, because you don’t get a lot of time on TV these days. You’re in, you’re shooting, you’re moving on all the time, so it’s about nailing it really quickly. But yeah, there’s a slightly different approach. They’re both really sweet, talented girls, and they make it very easy.

AX: Did you learn anything making Season 1 that’s been invaluable in Seasons 2 and 3?

TURNER: I guess when you’re on a new production, with a new crew, which it was in Season 1, most of the crew I didn’t know – some of them I did, but most I didn’t – going into Season 2, you have that relationship already built up, so everything is supposed to run that bit smoother. You’re building these relationships, you know how people work, they know how you work, they know what you need before you even ask for it. It’s like a well-oiled machine now, whereas the first tentative steps you make, it’s always a bit, you don’t know where you’re at and you’re figuring stuff out. So it’s a lot smoother now.

AX: Do you feel that being Number One on the call sheet gives you a responsibility to set the tone for the set?

TURNER: Yeah, I do. I’ve always felt that from the moment I walked on. People do look at the Number One, I suppose, and if you’re coming on, and if you’re not prepared in whatever way, shape, or form, it just doesn’t look good, and it gives a funny message to other people. They’re thinking, if you’re doing this, not that they would do it also, but you’re at the helm of the ship, and you’ve got to be strong and disciplined and get it right. There’s no room for mistakes.

AX: How long would you like to see POLDARK run?

This interview was conducted during PBS’ portion of the summer 2016 Television Critics Association press tour at the Beverly Hilton Hotel.