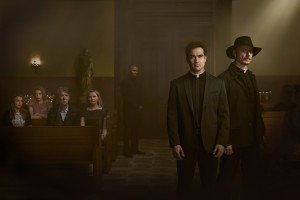 Rupert Wyatt is primarily known as a feature film director for THE ESCAPIST, THE GAMBLER and the franchise reboot RISE OF THE PLANET OF THE APES. However, when he read Jeremy Slater’s pilot script for Fox Network’s new series THE EXORCIST, the British filmmaker says it grabbed him. Indeed, Wyatt was so impressed that he not only directed the pilot, but also became one of THE EXORCIST’s executive producers.

In the series THE EXORCIST, forty years have passed since the events that we saw in the 1973 film, based on William Peter Blatty’s novel (we see a news clipping that refers to the MacNeil case). Geena Davis’ character Angela Rance, a Chicago woman juggling a career and caring for her ailing husband (Alan Ruck), believes that something is gravely wrong with one of her two daughters. She turns to Father Tomas Ortega (Alfonso Hereira), who at first is skeptical, but ultimately reaches out to the experienced – and deeply troubled – Father Marcus Keane (Ben Daniels).

In a telephone interview, Wyatt discusses his work on the show.

ASSIGNMENT X: Were you familiar with the original EXORCIST film?

RUPERT WYATT: Very much so, yes.

AX: How and why did you become involved in THE EXORCIST project?

WYATT: Well, I was looking to do some television in between films, and reading a number of scripts, and I am always, for obvious reasons, somebody who likes to go for scripts that I can visualize, that I can see, and the strength of the story, all of those things. I wasn’t necessarily setting out to make anything in that genre, or in particular anything to do with THE EXORCIST, per se, but it was really the script that attracted me.

I think there are many people who think [that TV series based on films are] a sad and tired way of people making money out of old rope. I for one believe that, yes, there is that at certain points, but then there are also many, many different perspectives on the same story. You only have to look at Shakespeare to see that. I think if it’s done right, and approached in the right way, with the right intentions, which this was, it can be entirely justified and a really exciting piece of work. We all came out of it feeling like we’d achieved that.

AX: Who brought Geena Davis aboard? Was that you, was that Fox …?

WYATT: Well, we really wanted her, Rolin Jones, the show runner, and me and Jeremy. And then Fox do their thing. They made the approach and I’d like to think that she found the creative team appealing as much as the material, but you’d have to ask her that. We approached her and she said yes. We were lucky.

AX: Were any of the main actors people that you’d worked with before, people who were your idea?

WYATT: Well, there were many who were my idea, but my idea combined with Rolin and Jeremy and Barbara Wall, our producer, and our casting directors. It was very much a group effort. But one actor in particular, Ben Daniels, who plays Marcus, was somebody who I’d seen before and really, really like as an actor. I think he has amazing presence, he’s a very sincere actor, and I thought that would be really interesting for Marcus. So we really went to bat for him. Kurt [Egyiawan], who plays Father Bennett, our man from the Vatican, he was an actor who I’d seen in BEASTS OF NO NATION, and even though he’s not center stage in that film, he had an amazing presence as Idris Elba’s Number Two, and I thought he was a really interesting performer who hadn’t done a great deal of film and television work. He had done mostly theatre. But it was just trying to find interesting faces, interesting performances that fit into a world and, dare I say it, not go too close to what you would say is a typical ensemble of network television. We were trying to find real-world people. And I think in many ways, when you’re making a show out of THE EXORCIST, the more original in your thinking you can be, the more you’ll be I guess appreciated by the audience.

AX: Something we see in the opening episode is what look like major practical effects involving a very young actor, Isaac Linares as the possessed Gabriel, in the Father Marcus’ flashbacks. How was that to handle?

WYATT: Tough [laughs]. It’s always a challenge working with children. Just on a practical level, there are only so many hours in the day, for legal reasons. When you’re then combining that with a lot of time in the makeup chair, I wouldn’t call it the most comfortable for anybody, child or adult, to have to have prosthetics put on, blood work, all of those things. So it’s hard to then have the freedom and the relaxation time to work an actor and have them actually then really get into the character, but [Linares] was wonderful. He was incredibly precocious, he was very mature, he was a terrific actor. And he was very calm, very into it. So it was actually great, creatively.

AX: Since you’ve obviously had a lot of experience with motion capture with RISE OF THE PLANET OF THE APES, was there any thought of trying to do the possessed child that way?

WYATT: No, I don’t think so. [There is] the cost factor, but also, when you’re working with humans, the idea of motion-capturing humans, we’re still a step away from that, and the expense of doing that to then achieve a photo-realistic result – you’re falling into the Uncanny Valley issue. So I think at the end of the day, if you have a human character, you really want to use a human actor.

AX: There’s a scene with a rat that looks like it couldn’t have been done with a live rat, both from a humane standpoint and a physical possibility standpoint. How did you accomplish the effects?

WYATT: Well, as is always the case with vis effects, there are a lot of ways to [do it], and in that case, we tried options, and one was to use a live rat for the initial running out from the boxes. The trouble is, rats don’t run on command, and if they do, they don’t necessarily run in the right direction. And it requires a sealed set so they don’t escape, and blah de blah. So we did have a live rat on set with us, just so we could use it as reference, really. At the end of the day, we didn’t actually film it, so there’s no live rat used. It’s all a hundred percent CGI. And it was done by our team at Zoic, who handle all the VFX. So it was all built-in digital. They used a live rat as a reference, but the speed and the performance of the rat is all CGI.

WYATT: No. Again, I think it’s a testament to the strength of the script. The script was great cause-and-effect storytelling from Jeremy Slater, the writer. So from a structural point of view, there was very little work done in the edit. The sad inevitability, I think, is especially with network television, you’re really confined to a finite running time, I think it’s forty-three minutes, and inevitably, what happens is, you’re shooting more time than that, so there was a lot of I guess, my more cinematic flourishes perhaps hit the cutting room floor, just because we had to be so judicious with our storytelling. But structurally, it was very faithful to the script.

AX: As far as paying homage to the movie, were you thinking, “What’s an iconic image that says ‘THE EXORCIST,’ without copying THE EXORCIST?” You have that image of Father Marcus from the back that suggest echoes the film’s image of Father Merrin in front of the MacNeil house …

WYATT: Yeah. Having gone through a franchise once before with PLANET OF THE APES, as a filmmaker, I never want to do a B side of a good, terrific A side. There’s no upside in that. And yet, at the same time, there is a belief, some might say it’s justified, that fans, the audience, want to relate what they’re seeing to something that they believe to be so iconic in the original. I think the answer lies in, is it faithful to the story that you’re telling? In PLANET OF THE APES, I remember, there was a lot of pressure to somehow work in the Statue of Liberty into the film. And it really bore no relation to our film. So what I ended up doing was having the main ape character, Caesar, build a model of the Statue of Liberty during one scene. And people picked up on that and they really liked it, because it wasn’t intrusive. And I think it’s the same with THE EXORCIST.

I guess the thing that I found most satisfying and special that related to the original was the “Tubular Bells” score coming in at the end. I never wanted to go with that initially, because I thought again, we’d be just a bad simulacrum of a great original. But it really worked. Obviously, the audience will be the judge of this, but it felt like to me that if we earned it, then they would love the show all the more for it, and [it is] paying homage to the original, without copying it, and being driven by something that came from the original.

AX: Did you do any research into the Catholic Church’s current position on exorcism?

WYATT: When you look at the broader house of the Catholic Church, they’re looking to progress into the modern day, into the modern world, and some believe exorcism to be an archaic practice that actually doesn’t belong in the modern world, and I think that was the case for the last thirty or so years. There was a real belief in the Catholic Church that they needed to bury it and not acknowledge it. I think that’s changing, interestingly. I think their [position] from what I gather and from what people say, that actually, it does belong as part of the Catholic Church. It’s just one very small part of it. The nature of possession is, it’s few and far between, but it’s still something that those who are believers think is very, very plausible.

AX: And is there anything else you’d like to say about THE EXORCIST?

WYATT: It’s something that obviously, the proof will be in the pudding. People will watch it and judge it for themselves, but it’s been very gratifying to see that the majority of those who have seen it to come away feeling like this is something that has legs, has a future in its own right. You only have to look at recent television shows like FARGO to see that you can take something that is iconic and a classic and progress it in a different way on a different platform, which is what we’ve done.

All that I can say is that it’s probably the best filmmaking experience I’ve had since making my first film, and I mean that on the basis of a great deal, but creatively, I came to work every day very excited for what was next and the actors I was working with and the crew I was working with and the scenes that I was shooting. It really appealed to me on so many levels. So when that happens, you know that, whatever the results, you’re hopefully doing your best work.