Our brand is crisis review 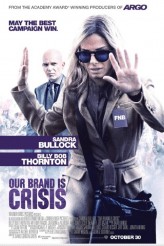 Movie Review: OUR BRAND IS CRISIS

“Inspired” by Rachel Boynton’s 2005 documentary of the same name, OUR BRAND IS CRISIS explores what happens during and after a political campaign in Bolivia is run by American consultants. The fictional film, directed by David Gordon Green and scripted by Peter Straughan, is often insightful and thought-provoking. Unfortunately and perhaps ironically, this story about a win-at-all-costs mentality is saddled with someone’s need to nudge it toward conventional comedy. The two sensibilities don’t mesh as well as they might.

A framing device introduces us to “Calamity Jane” Bodine (Sandra Bullock) as she’s being interviewed. We see Jane being coaxed out of retirement by fellow strategists Nell (Ann Dowd) and Ben (Anthony Mackie), who have been hired to run the campaign of Bolivian presidential candidate Castillo (Joaquim de Almeida). Castillo has actually served as Bolivia’s president before, but he did such a bad job and his populist rival Rivera (Louis Arcella) is so high in the polls that his defeat seems assured. However, once Jane gets motivated, she’s inspired, and nothing motivates her like the presence of her perpetual rival Pat Candy (Billy Bob Thornton), who’s running Rivera’s campaign.

The more serious aspect is the more intriguing. We learn a lot of things that feel true as far as how advisors will try to turn any development, no matter how seemingly disastrous, to their candidate’s advantage and how easy it is to commit amoral sabotage.

Because it’s not set up quite right, OUR BRAND IS CRISIS both makes points and slips in later sequences when the consequences of selling a candidate, who can dictate the fate of a country, as an unexamined “brand” become starkly clear. Even though Straughan and Bullock both work hard to give Jane a complex inner life, her early reluctance to return to the political arena seems more a matter of health than ethics. We know that she’s haunted by a long-ago incident, but what happens in the film’s latter portions seems abrupt, more a concession to expectations than a natural result of what we’ve observed thus far.

A bigger issue is that somewhere on high – it may not have been the filmmakers – decided that CRISIS needed to have big high-comedy moments. This means that Jane is a klutz who suffers from altitude sickness (a problem in mountainous Bolivia) and is prone to childish pranks when drunk. The film goes back and forth between sly, dry specificity and broad slapstick, and winds up being uneven.

Still, OUR BRAND IS CRISIS is worth seeing. Bullock, Thornton, Mackie, Dowd, Almeida, Arcella, Scoot McNairy and more are all entirely on target. Furthermore, even with all the distractions, some of the observations here are darkly resonant. For those who are wondering how some truly unlikely people can vault up the political polls, this film provides a credible partial answer.